PHASE ONE: PLANNNING THE PEFA ASSESSMENT 8

STEP 1: DIALOGUE ON THE NEED FOR A PEFA ASSESSMENT 8

1.1. Initiate dialogue on the need for a PEFAassessment 10

STEP2: DEVELOP THE CONCEPT NOTE OR TERMS OF REFERENCE 13

2.1. Prepare a draft concept note or terms of reference 14

STEP 3: PREPARE FOR THE ASSESSMENT 16

3.3. Prepare schedule/agenda for the field work 19

3.4. Specify the communication and reporting requirements 19

STEP 7: PEER REVIEW AND REFINEMENT OF THE DRAFT REPORT 25

9.1 Key issues for the reform dialogue 29

9.4 Review and approval of reform plans or initiatives 31

Annex 1.3. Guidance on the preparation of a PEFA Assessment Concept Note or Terms of Reference 45

Phase four focuses on actions to be taken after the PEFA assessment has been completed. This phase is necessary to make effective use of the assessment. Indeed, it is not clear whether an assessment would have any value without this phase. However, assessment funding agencies should aware that as Phase 4 follows the completion of the PEFA report, it will require additional resources to be undertaken.

In this phase, the assessment stakeholders should work to ensure that the completed assessment informs initiatives to strengthen PFM, that it

facilitates stakeholder cooperation and that it serves as a common information pool for any subsequent diagnostic or PFM reform work. As mentioned in the previous section, a final assessment workshop is usually held to disseminate the report to all interested stakeholders (e.g. government, development partners, civil society organizations and representatives etc.). Although the PEFA does not include recommendations, such a workshop can provide the transition to the use of the assessment as input into further work on PFM reform.

While the end-to-end PEFA assessment process should be organized to ensure ownership, build capacity and facilitate consensus among stakeholders,vthe emphasis of phase IV is on the process after the PEFA report is completed. In this context good PFM performance is determined by the ability of the PFM systems to support the effective and efficient achievement of political objectives while maintaining macro-fiscal control as measured by the three-main fiscal and budgetary outcomes – aggregate fiscal discipline, strategic allocation of resources and efficient service delivery. More detailed guidance on how to utilize PEFA assessments to support reform initiatives is included in Volume IV of the PEFA Handbook. Volume IV provides guidance to countries on the issues that need to be considered in developing effective reform initiatives, strategies or action plans design to address each country’s unique situation 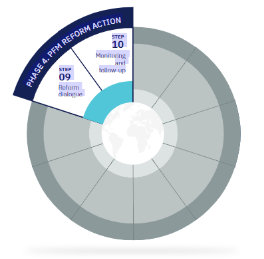 Following completion of the PEFA report, the government should continue the dialogue among stakeholders on the implications of the assessment findings for PFM. The PEFA report can be an important catalyst for change. However, the report alone is not sufficient to develop a reform plan. While the PEFA report can provide clear, evidence-based conclusions on the strengths and weaknesses of PFM, reform initiatives need to take into account non-technical factors that impact on PFM including government policy, country capacity,