This report presents the findings of the first assessment of PFM systems in the Municipality of Berat based on PEFA methodology. It constitutes one of five municipal PEFA assessments being conducted simultaneously by teams of assessors contracted by SECO and USAID. The other municipalities are Fier, Kuçova, Tirana and Tropoja. The objective of the assessment is to gain a better understanding of the strengths and weaknesses of municipal PFM systems as a basis for discussing PFM reform priorities and possible areas of support to the newly restructured municipality.

The main findings of the assessment are focused on whether the Municipality has got appropriate systems in place to assist it in achieving the three main fiscal/budgetary outcomes (aggregate fiscal discipline, strategic allocation of resources and efficiency in use of resources for service delivery). However, a summary of findings on the individual elements of the PFM systems – indicator by indicator - can be found in section 4.1 of the report and is reflected in the table of scores at the end of this executive summary.

Implications of PFM performance in the main budgetary outcomes

Aggregate fiscal discipline is not well supported by the lack of good quality of and timely financial reporting and of fair aggregate expenditure and revenue out-turn compared to the original approved budget. Achieving fiscal discipline is overall affected by the relatively significant amount of earmarked grants-related extra-budgetary operations and by the lack of oversight of aggregate fiscal risk of locally-owned public enterprises. The Municipality’s strength of operating a bulk of public funds under a Treasury Single Account (TSA) system is undermined by the inability of the Municipality to achieve a prudent and disciplined use of available public resources and to assess the combined fiscal risks of the Municipality and the Water and Sewerage Company (WSC). The strategic allocation of resources is negatively affected by planning and budgeting processes not well aligned and articulated to policy objectives, and resource allocation decisions made on the basis of financial reports lacking elements of substance and quality. The process of allocating resources strategically is strongly affected and weakened by a high variance in expenditure composition, low predictability in the release of substantive funds, the absence of costed program strategies and no active role played by the local council in the scrutiny of the draft budget law and audit reports.

The efficient delivery of basic public services is undermined by ineffectiveness of the internal control framework. It is also weakened by the absence of proper cash and procurement planning and programming.

On balance, the Municipality of Berat has PFM systems with strengths in medium-term budgeting, treasury and internal audit. Other strengths pertain to a standardized budget classification and more recently to expenditure arrears and management of payroll and personnel changes now under relatively good control. On the other side, however, the PFM systems and financial internal controls are operate with low effectiveness and a great margin for improvement such as those relating to fiscal planning, monitoring of the overall fiscal risks, contractor management, cash flow forecasting, and the absence of costed medium-term plans for various municipal programs. The authorities are well aware of the situation and are committed to make the necessary efforts to improve the overall performance of the local PFM systems with MoF and donor assistance to improve the efficiency of local service delivery in general.

The Municipality of Berat has not embarked on any major reform process of PFM, but focused mainly on enforcing the law and issuing warnings and reprimanding or penalizing those public officials held responsible for irregular and wasteful expenditure and financial malpractice. The municipality is taking steps towards improving transparency of financial management by integrating the Open Data application to its website, which presents all the treasury transactions of the municipality. Within 2017 the official website aims at integrating a new budget transparency application which presents user-friendly budget data.

Ministry of Finance’s CHU-FMC and CHU-IA are providing strategic and technical guidance to the Municipality’s efforts aimed at strengthening budgeting and planning, accounting and financial controls and furthering a more independent role by the Internal Auditor. These actions are embodied in a PFM reform strategy 2014-2020, steered within MOF and partially funded by external donors and covering the central government and local governments. The primary objective of the reform strategy is to improve fiscal and expenditure policies, systems, capacity and outcomes to support economic and social development nationwide. There is no comprehensive PFM reform action plan or capacity development program developed for the Berat territory, with the exception of a few specific technical capacities being built under MoF assistance. 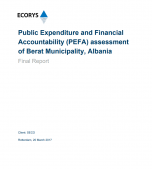