This report presents the findings of the first assessment of PFM systems in the Municipality of Tropoja based on PEFA methodology. It constitutes one of five municipal PEFA assessments being conducted simultaneously by teams of assessors contracted by SECO and USAID. The other municipalities are Berat, Fier, Kuçova and Tirana. The objective of the assessment is to gain a better understanding of the strengths and weaknesses of municipal PFM systems as a basis for discussing PFM reform priorities and possible areas of support to the newly restructured municipality.

The assessment is based on the performance of the PFM systems as at September 2016 and any period prior to that as defined by PEFA methodology. It is focused on the amalgamated Tropoja Municipality following the 2015 merger of Bajram Curri Municipality with seven former communes as part of the Territorial Administrative Reform (TAR), but covers for a number of issues the period back to FY2013 inclusive (i.e. the performance of the former Bajram Curri Municipality) where this is required by PEFA methodology. In such cases, scoring of PEFA indicators is done only when information across the years enable firm assessment of performance i.e. is not the result of disruption during the amalgamation. The institutional coverage of the assessment is the central municipal administration, the eleven dependent budget institutions and to a limited extent the one public corporation (water supply company) owned by the Municipality as well as national level institutions forming part of the municipal finance management system. There are no extrabudgetary units and no lower level of government.

The main findings of the assessment are focused on the whether the Municipality has got appropriate systems in place to assist it in achieving the three main fiscal/budgetary outcomes (aggregate fiscal discipline, strategic allocation of resources and efficiency in use of resources for service delivery) as well as the integrity of the fiscal data on the basis of which many of the findings rely. The main findings are summarized below. An overview of findings on the individual elements of the PFM systems – indicator by indicator - can be found in section 4.1 of the report and is reflected in the table of scores on page 10.

It is important to note that conditional or earmarked transfers from the state budget to the municipality – including those for delegated functions and Regional Development Fund (RDF) projects – have been treated as extra-budgetary.

Overall fiscal discipline is not a primary concern, although a few issues need to be addressed. The Municipality is bound to balance its budget as it has very limited means of borrowing and in other ways run a fiscal deficit.

The Municipality’s discretionary revenue is relatively secure with about 85% received in terms of unconditional transfers from the state budget; most of it block grants transferred with a high degree of predictability of both amounts and in-year timing but not set within a multi-year framework which would enable the municipality to plan their use effectively.

While own revenue collection only contributes some 15% to budgetary revenue, it constitutes an important element in the social contract between citizens and the elected Mayor and Council, and is a vehicle for creating fiscal space for improved service delivery. Until 2015 this revenue collection was seriously underperforming. Preliminary data for 2016 suggests that significant improvements are taking place.

Municipalities in Albania have only limited scope for choice in the allocation of resources. They have little responsibility for the provision of the main health and education services, and their involvement in social protection is essentially that of an agent of central government. A strategic plan for the Municipality has so far been missing as a basis for deciding medium- to long term priorities for resource allocation, but is now under preparation. Lack of proper economic analysis and selection criteria for major investment projects further highlight the ad hoc nature of strategic resource allocation so far.

Due to lack of adequate data it has not been possible to assess the reliability of the Municipality’s budget in terms of compositional variance from the originally approved spending allocations.

The in-year allocation of earmarked grants constitutes a major factor in undermining the role of the original, approved budget as a plan for the Municipality’s annual activities. Parts of those transfers are quite predictable as they do not fluctuate much from year to year, whereas others are difficult to foresee and may require co-financing from the approved budget. The latter concerns in particular RDF grants which are allocated mid-year.

Transparency of the budget and the overall financial operations shows a number of important weaknesses. The ability of the Municipal Council to scrutinize and challenge budget estimates prior to budget approval is very limited due to the extremely short period allowed in practice for this process and the lack of technical support. Whilst the approved budget is publicized, in-year budget execution reports and annual financial statements are not made public. This hinders any meaningful contributions from civil society to discussion of the Municipality’s activity and expenditure priorities.

In this context it is a minor concern that several deficiencies have been identified in the management systems for budget preparation, such as lack of a detailed and current budget calendar, lack of expenditure ceilings for estimates preparation by budget institutions, lack of indicators of output and outcome for service delivery, and lack of a medium-term approach to budget strategy.

The strategic planning issue mentioned above is exacerbated at the annual operational planning for the Municipality’s service delivery institutions due to unreliable resource allocations - whether this is because original budget allocations are cut or resources for additional activities are allocated during the year. It is further complicated because there are links between approved budget allocations and earmarked/specific transfers such as investment co-financing or staffing for functions funded offbudget.

At the operational level, control of employment and payroll appears to function reasonably well as does the payment processing for non-salary expenditure. Also, recent gains in transparency and monitoring of procurement augur well for improvements in value for money of expenditure. However, problems with clarity of bid selection criteria and procedures mean that more has to be done to ensure such value-for-money. Also, the build-up of expenditure arrears, and lack of plans for settlement of the existing stock, may lead vendors to increase prices offered to the Municipality in order to compensate for anticipated late payment.

External audit by HSC is thorough and include many important recommendations for improving expenditure efficiency, but the compliance approach to the audit – rather than systems approach – and the lack of response to audit findings seriously limit the impact of the audits.

Major concerns regarding the quality of financial data were identified by external audit in 2014 and are likely to have multiplied with the transformation into the much larger new Municipality, particular as concerns the inventory of assets (including their ownership, usage and valuation) and liabilities (expenditure arrears). Risks to data integrity stem from poor record keeping, lack of audit trails and use of multiple stand-alone computer systems to generate financial records, even if the general use of the Treasury’s centralized receipt and payment systems provide some degree of assurance of the completeness and accuracy of the basic records of receipts and payments.

While the general responsibility for national PFM reform formulation and implementation oversight rests with Ministry of Finance, the PFM strategy involves the entire government sector i.e. also the municipalities.

Implementation of TAR has caused a disruption of the PFM reform agenda for the Municipality of Tropoja which has had to make major changes to organizational structure and accommodation of the administration. The Municipality has nevertheless moved forward on the reforms. An internal audit unit is being established and a strategic development plan for the new Municipality is in the making to serve as an anchor for sector service plans, investment project selection and mediumterm expenditure priorities. There are also ongoing efforts to improve budget formulation and documentation.

Many challenges remain for the reform agenda both at national and municipal level. In particular, (a) the current PFM reform agenda is not based on an assessment of the extent to which the main budgetary outcomes are achieved and what weaknesses in the PFM systems may be most important in hindering such achievement; (b) some reforms are unlikely to achieve their objectives unless other PFM functions have reached certain levels of performance and such linkages need to be addressed through sequencing of reforms at the technical level; (c) the Municipality still needs to resolve problems carried over from the former communes such as expenditure arrears and assets inventory; (d) capacity constraints constitute an important challenge to reform efforts; and (e) phasing in of the new delegated functions of the Municipality – with the related funding measures – is yet to be firmed up. 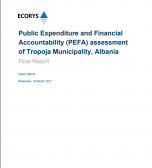