1. The Kyrgyz Republic is a relatively small mountainous country with limited developed resources. The balance of the economy and the well-being of its population of 6.5 million are heavily dependent on remittances from its citizens working in Russia and Kazakhstan, which provide about 30 per cent of the national income. As a result, its economy is very exposed to difficulties arising from developments in the world economy outside its control and from fluctuations in the production of gold which is its principal export. Government revenue and expenditure absorb a larger share of GDP than in neighbouring countries, while there has generally been a fiscal deficit much of which has been filled by external financing on concessional terms.

Purpose and management of the assessment

2. During the last decade the country has received continuing support from development partners in maintaining external balance and in efforts to improve its economy. A key element has been a series of Extended Credit Facility programmes with the IMF which have kept the fiscal deficit within limits, while the World Bank, European Union and others have supported efforts to improve public financial management (PFM). A first Capacity Building programme managed by the World Bank and financed by a multi-donor trust fund was implemented between 2009 and 2015, and a successor programme has been running since 2018. Previous PEFA assessments of the central government took place in 2009 (using the original 2005 Framework) and in 2014 towards the end of the CB1 programme (using the criteria in the 2011 PEFA Framework), and this current assessment (using the revised 2016 Framework) has been commissioned as part of the CB2 programme in order to take stock of the current situation and review progress since 2015. In order to obtain a full picture of PFM at both central and local government levels, parallel assessments are being made of a large city (Jalalabad) and two smaller local settlements. The assessments are managed by the CB2 Programme Implementation Unit (PIU) in the Ministry of Finance (MoF).

3. This assessment like its predecessors mainly focuses on the main budget of the central government – the Republican Budget – although it also has regard to other activities (social benefits and health services provided through extra-budgetary social insurance funds) and bodies (public enterprises providing electricity, transport and communications, and other services) which the government ultimately controls. The Republican Budget and the sum of local budgets together make up the State Budget. Total General Government Expenditure (GGE) also includes the expenditure of the Social and Mandatory Health Insurance Funds which are partly financed by employers’ and employees’ contributions as well as by transfers from the Republican Budget. These are the only extra-budgetary units in the Kyrgyz Republic. The assessments were launched in January 2020, but have subsequently been delayed by the impact of the Covid19 crisis. Where the assessment depends on past performance over a three-year period, the years covered are 2017-19. It also takes into account developments up to November 2020, which is the cut-off date. The fact that the evidence has had to be collected on-line, rather than through in-country fieldwork has limited the extent to which findings could be cross-checked with people outside the government.

4. The 2010 revolution resulted in the replacement of an essentially Presidential regime by a constitution in which the ultimate power rests largely with the Parliament (Jogorku Kenesh) which appoints the government. The structure of politics is rather fragmented, resulting in a series of unstable coalition governments during the last decade. The country has been characterized by relatively free elections, and government activity has become increasingly transparent. The Parliament has a direct impact on government decision-making, having a role in the planning of the overall fiscal stance as well as the selection of investments and other details of government revenue and expenditure. New government legislation has to be negotiated with the Parliament, which may be reluctant to approve necessary but unpopular measures: thus the government has been unable on occasion to give effect to commitments it has undertaken in the context of IMF programmes.

5. The continuing dependence of the country on some degree of support from development partners has ensured that a sufficient degree of aggregate financial discipline has been maintained. But the continuing need to adapt to external forces, including the impact on revenues and external balance resulting from fluctuations in remittances from citizens working in other countries, has reduced the stability of resource allocation and the scope for improvements in the efficiency of service delivery. The heavy burden of public service pay and the need to absorb the losses from the supply of electricity to domestic consumers below cost have preempted resources from being devoted to urgent investment needs; if changes in these areas could be achieved, at least 2-3 percentage points of GDP could become available for increases in public  investment. Although detailed medium-term projections of revenue and expenditure have been produced, these have not resulted in sufficient continuity in planning the use of resources in different public services needed to achieve specific objectives in terms of service delivery. External debt has been kept within manageable limits, but represents a serious risk if the exchange rate weakens, as has happened during the Covid19 crisis, while the scope for increased reliance on domestic borrowing is limited by the small size of the local financial market and the need to pay relatively high interest rates.

6. Procedures for setting and executing the budget generally work well. There is full and transparent consideration in Parliament of the Government’s budget proposals. Administration of the tax system has been improving, and the volume of tax arrears is relatively small. But the intention stated in the Government’s concept for Fiscal Policy 2015-20 to establish a separate Tax Court and to levy additional taxes on luxury products was not carried through. Almost all receipts and payments – at local as well as at central government level – take place through the Treasury Single Account. Procurement is transparent and competitive. But satisfactory administrative arrangements are not sufficient in themselves to ensure the best possible allocation of resources or efficient delivery of services.

Performance changes since 2015 and prospects for further improvement

7. The two CB programmes (see paragraph 2 above) and other efforts by the World Bank, European Union and other development partners have supported a range of PFM improvements since 2015. Transparency at every stage of budget preparation and execution has increased. New instructions for managing public investment have been issued. A degree of central management and control has been established over the employment of staff in central and local government. The coverage of internal audit across government has been considerably extended, and the harmonization unit in MoF is monitoring the appropriate responses to audit findings. An independent body has been established to deal with procurement complaints. All of these developments are reflected in performance changes as measured by the PEFA Indicators. Following a consultancy, arrangements have recently (late 2020) been put in place for the regular monitoring of payment arrears. A current consultancy is seeking to make the medium-term planning of expenditure more effective in securing improvements in the quality of public service provision. A major programme funded by the International Development Association affiliate of the World Bank has recently been initiated to improve the functioning of the tax system, and make it more user-friendly. However, despite these improvements in PFM, the performance of the Kyrgyz economy continues to be adversely affected by the obstacles to the growth of businesses created by the tax system, and the lack of trust by investors in the judicial system. 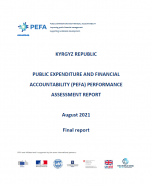