This book examines the interplay between public financial management (PFM) and other key aspects of governance in low- and middle-income countries, using the Public Expenditure and Financial Accountability (PEFA) framework and related data sets to measure the quality of PFM systems. The PEFA framework was developed on the premise that effective PFM institutions and systems play a crucial role in the implementation of national policies for development and poverty reduction. It is part of a broader set of initiatives aimed at strengthening public sector governance frameworks.

Governments and development partners have been using PEFA to support analysis of PFM since 2005. They have also used it to provide a baseline for reform initiatives and to inform action plans for improving performance. This book uses the PEFA assessment results to understand the impact of PFM performance on other governance initiatives.

The book is part of a project to improve the evidence base for understanding the impact of PEFA and PFM reforms with respect to political institutions, fragility, anticorruption, and revenue mobilization. The research was undertaken by the Overseas Development Institute (ODI) in close cooperation with the PEFA Secretariat.

The research seeks to strengthen the understanding of the relationship between political institutions, including forms and types of government, electoral systems, and political parties and the quality of PFM systems. It further explores the credibility of the budget and fiscal outcomes in fragile contexts and compares those to nonfragile contexts to highlight the role that PFM can play in environments with weak institutional capacity. The book also aims to disentangle the relationship between corruption and PFM performance. Finally, it looks at the role of tax administration in domestic resource mobilization and particularly at the credible use of penalties for noncompliance for improving tax performance.

The primary audience includes government officials, staff of bilateral and international organizations, researchers, and members of civil society involved in PFM reforms and other governance initiatives. This book contributes to discussions on the role of PFM in strengthening governance frameworks by offering a cross-country analysis to outline determinants and outcomes associated with better PFM performance. It also provides an overview of key debates on what constitutes a good PFM system, highlights which parts of the PFM system matter more for different governance initiatives, and attempts to quantify the impact of PFM reforms. 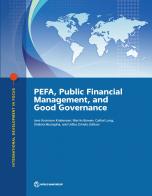