One of the strengths of PEFA 2016 is that it allows changes in PFM performance to be tracked across assessments, even those based on earlier versions of the PEFA methodology. The report “Guidance on tracking performance across time: Comparing PEFA 2016 against PEFA 2005 or PEFA 2011,” provides guidance on how to do so. This guidance is relevant only for users who want to directly compare PFM performance with a previous assessment. It does not apply to new, baseline assessments using PEFA 2016, and is not relevant for countries that do not want to make a direct comparison with a previous assessment, even where one exists. 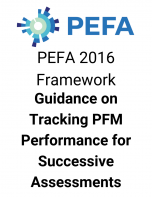