Public financial management (PFM) arrangements at the subnational government (SNG) level are likely to depend on arrangements determined by the central government (CG) in national legislation or national constitution. PFM arrangements can vary considerably by country. Variations reflect differences in, among other things, population and geographic size, governance, functions and responsibilities, administrative traditions, and the degree of operational discretion.

It provides additional guidance for applying the PEFA methodology at the subnational level. To this end, it offers recommendations on how each of the PEFA indicators and dimensions can be applied or modified to better suit the characteristics of SNGs. It introduces some new indicators and a new pillar on intergovernmental fiscal relations which consists of two indicators, including: Higher Level of Government (HLG) 1: Transfers from higher levels of government; and HLG 2: Fiscal rules and monitoring of fiscal position.

Part 1 and 2 of the guidance present the general features and the methodology of the SNG PEFA framework, which are similar to the use of PEFA at the national level.

Part 3 focuses on indicators, including how the standard PEFA 2016 indicators may be applied or modified, if necessary, to accommodate differences at the subnational level (see subsection 3.2 for the full set of indicators).

Part 4 describes the particularities of the PEFA process for subnational governments.

The guidance for subnational government (SNG) PEFA assessments is a product of knowledge sharing and collaboration among numerous experts. The guidance was prepared by Guillaume Brulé and Julia Dhimitri, under the leadership of the Heads of the PEFA Secretariat Srinivas Gurazada and Jens Kristensen. Additionally, members of the PEFA Secretariat provided input to the guidance: Helena Ramos, Holy-Tiana Rame, Urška Zrinski, Martin Bowen, Antonio Leonardo Blasco, Silvia Lubenova Kirova, Nene Mane, and Ashikur Rahman.

We want to thank the teams who helped with piloting of the guidance for the SNG PEFA assessments in the following countries: Spain, Burkina Faso, Belgium, Argentina, China, Mexico, Nepal, Ukraine, Moldova, Mongolia, Cambodia, Mali and Rwanda. 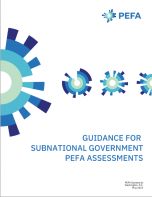