Assessing the Impact of the PEFA Framework (2008)

This study provides an analysis of the specific impact of the PEFA Framework on governments and development partners, in terms of the framework’s objectives. It is based on analyzing the experiences of 12 country cases in a series of structured telephone and face-to-face interviews in late 2007.

The study concludes that PEFA had direct and indirect effects on PFM through improving knowledge of PFM performance and contributing to government and development partner PFM reform activities. Government participation in the assessment was identified as crucial in leading to a direct or indirect effect, which more important than any other factor. 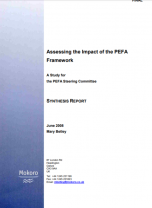