The purpose of this PEFA assessment is to provide an objective analysis of the present performance of the PFM system in Jamaica against the PEFA indicators. This PEFA provides an update of progress in PFM in Jamaica since the last PEFA in 2012 and establish a new PEFA baseline using the 2016 PEFA methodology. As Jamaica has been the recipient of significant technical assistance to support enhancement of many elements of its PFM system, it is now an appropriate time to take stock of overall progress.

The assessment covered expenditures by central government budgetary units and revenues collected by government. Revenue collected on behalf of agencies such as National Insurance Fund and National Health Fund was included in the examination of revenue administration. Extra-budgetary units and local government were included in terms of indicators 6 and 7 relating to central government operations outside financial reports and transfers to local government. The assessment team visited Jamaica from October 10 to October 25 (time of assessment). The financial years covered for indicators that required assessing over three years is 2013-14, 2014-15 and 2015-16. FY2015-16 is the latest completed financial year.

Overall, the results of the PEFA show a public financial management system in Jamaica that is strong but there are notable weaknesses in aspects of risk management, multi-year budgeting and treasury operations. The budget process is evolving and the introduction of a fiscal framework is a positive start. Revenue forecasting has improved significantly since the previous PEFA and the revenue agencies have developed effective processes and procedures by more timely collection and transfer to MOFPS, which positively impact on the execution of the budget. On the expenditure side, however, limited cash plans and insufficient commitment control detract from effective management of the release of the budget without accumulation of arrears. Arrears are close to 10 per cent of expenditure and are not adequately monitored.

Good information on budget execution is readily available to decision makers, but timeliness of issuing the reports could be improved. Publishing the available data and analysis would greatly enhance transparency. A key lesson from the recent global financial crisis is that risks in the public corporations, subnational government and social security sectors require careful management. Increasing visibility regarding the operations, finances, and thus risk, associated with the statutory bodies and commercial, public corporations is essential for managing such risks in Jamaica. A performance management framework is not as yet developed and is something that will be important, both to drive internal efficiency and to support accountability for results in a situation where the institutions of external oversight are weak.

External audit and scrutiny are areas of significant strengths. The Auditor General Department is active in carrying out financial and compliance audits. It adopts ISSAI and INTOSAI auditing standards to govern its work with audit plans and strong staff development programs. External scrutiny of audit reports by the Public Accounts Committee is very positive and this is focused on areas that the AuGD has identified. The Public Administration and Appropriations Committee is active in examining issues affecting both the implementation of the budget and public administration.

Aggregate fiscal discipline is achieved due to control over spending during budget execution as well as realistic revenue forecasts. Strong revenue administration ensures that revenues are efficiently collected. The planned budget is not circumvented by the excessive use of virement and supplementary budgets and treasury operations and cash management enables expenditures to be managed within the available resources. However, control of contractual commitments is not sufficiently effective, creating a risk of generating further expenditure arrears. The strong external audit function and scrutiny by both the Public Accounts Committee (past performance) and Public Administration and Appropriations Committee of the House of Representatives (budget execution) enhances fiscal discipline.

There is only a one-year horizon in the budget planning process which limits the effectiveness of implementing national and strategic plans. There is a strong emphasis on the overall fiscal framework and this now needs to be transmitted to the budget formulation process at the individual MDAs. The Chart of Accounts caters for a multi-dimensional analysis of expenditure and then needs to be applied to strengthen the strategic allocation of resources.

The current weaknesses in the procurement system could have adverse implications for the efficiency in service delivery. Weaknesses in the accountability mechanisms – such as the limited comprehensiveness and delayed issue of annual financial statements - make external audits and their scrutiny ineffective as counter checks on inefficient use of resources. The patchy publishing of performance targets and outcomes, lack of systematic program evaluation, of data on resources available at service delivery units also undermines accountability. Such information would help management decision making to support improved service delivery. On the revenue side, operational efficiency is compromised by the accumulation of tax arrears. Lack of effective tax debt collection undermines credibility of tax assessments and the principle of equal treatment to taxpayers. The introduction of arrears write-off legislation would afford the opportunity to clean up tax arrears and make them current.

Changes in PFM performance since 2012

While this PEFA assessment has been carried out using the updated and expanded 2016 methodology, it has been possible to score against the previous 2011 PEFA methodology which was used in the 2012 PEFA assessment. The comparison of the assessments indicate that between 2012 and 2016 budget credibility has improved as revenues are now well in line with budget estimates. The Chart of Accounts has been modernized to comply with GFS standards. The reporting of expenditures and revenues by public bodies is both comprehensive and timely. There have also been improvements in the budget calendar, and internal audit and particularly in tax administration. The main area of backsliding is in the timeliness of in-year budget execution reports and end-year financial statements. However, external audit and legislative oversight have strengthened which will eventually impact on service delivery and the allocation of sources once a medium term and strategic approach to budget planning is enacted. 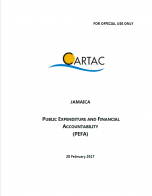