This report presents the findings of the first assessment of PFM systems in the Municipality of Tirana based on PEFA methodology. It constitutes one of five municipal PEFA assessments being conducted simultaneously by teams of assessors contracted by SECO and USAID. The other municipalities are Berat, Fier, Kuçova and Tropoja. The objective of the assessment is to gain a better understanding of the strengths and weaknesses of municipal PFM systems as a basis for discussing PFM reform priorities and possible areas of support to the newly restructured municipality.

The main findings of the assessment are focused on the whether the Municipality has appropriate systems in place to assist it in achieving the three main fiscal/budgetary outcomes (aggregate fiscal discipline, strategic allocation of resources and efficiency in use of resources for service delivery) as well as the integrity of the fiscal data on the basis of which many of the findings rely as summarized below. However, a summary of findings on the individual elements of the PFM systems – indicator by indicator - can be found in section 4.1 of the report and is reflected in the table of scores at the end of this executive summary.

Overall fiscal discipline is not a primary concern, although a number of issues need to be addressed. The Municipality is bound to balance its budget as it has very limited means of borrowing and in other ways run a fiscal deficit. Almost 40% of municipal budget revenue is received in terms of unconditional transfers from the state budget; with a high degree of predictability of both amounts and in-year timing.

A major concern is the poor performance in the Municipality’s own revenue collections, which accounts for a good 60% of budgetary revenue and has seen actual revenue outturns consistently more than 35% below estimates. Consequently, annual aggregate budgetary expenditure has had to be curtailed and has consistently been more than 25% below the original budget estimates during 2013-2015. Whilst there is scope for improvement in many aspects of revenue administration – and several measures have been taken to improve collection systems - the main issue in low revenue outturn appears to have been poor revenue forecasting.

Underperforming revenue collection forces the Municipality to cut the expenditure allocations during the year. As there are no effective expenditure commitment controls in place, budget institutions may eventually generate expenditure arrears on contracts which have already been entered but for which funds will no longer be available after the budget cuts. Effective systems of monitoring the existence and developments in expenditure arrears are missing and pose a risk to fiscal discipline.

A second concern is the lack of a fiscal strategy. Whilst, the pre-TAR expenditure arrears of the Municipality itself have largely been settled, a significant stock of arrears has been taken over from the former communes. The Municipality is also indebted to the MOF due to the latter having assumed debt servicing on old municipal loans. Insufficient provisions, if any, have been made in the annual budget estimates for those liabilities and a multi-year approach to paying them off is needed.

Municipalities in Albania have only limited scope for choice in the allocation of resources. They have little responsibility for the provision of the main health and education services, and their involvement in social protection is essentially that of an agent of central government. A strategic development plan for the Municipality has so far been missing as a basis for deciding medium- to long term priorities for resource allocation. Lack of proper economic analysis and selection criteria for major investment projects further highlight the ad hoc nature of strategic resource allocation so far.

At the annual level, the approved budget of the Municipality is clearly not a useful reflection of the likely operations of the Municipality for the coming year. If the budget is intended to represent the political priorities of municipal government – as it is supposed to be - it has at least been highly unrealistic. Apart from the changes to aggregate expenditure discussed above, the expenditure outturn composition by both functions and economic breakdown is significantly different from the original budget. The major in-year cuts in expenditure allocations necessitated by poor outturn on own revenue collections affect different expenditure categories and service functions to very different degrees.

Funding from the state budget through earmarked grants outside the Municipality’s originally approved budget – at about 40% of budget expenditure – seriously undermines the value of the approved budget as a plan for the Municipality’s annual operations. Part of those transfers are quite predictable as they do not fluctuate much from year to year (grants for social care, civic registration services etc.), whereas others are difficult to foresee and may require co-financing from the approved budget. The latter concerns in particular RDF grants which are allocated mid-year, but it may also affect the functions that have been decentralized to the Municipality from 2016.

Transparency of the budget and the overall financial operations shows a number of important weaknesses. The ability of the Municipal Council to scrutinize and challenge the budget estimates prior to budget approval is very limited due to the extremely short period allowed in practice for this process and the lack of technical support. Whilst the approved budget is publicized, in-year budget execution reports and annual financial statements are not made public. This hinders any meaningful contributions from civil society to discussion of the Municipality’s activity and expenditure priorities both at the annual budget approval process and during the (significant) inyear reallocations.

The lack of a medium- to long term anchor for planning affects efficient planning of resources and is exacerbated at the annual operational planning for the Municipality’s service delivery institutions due to unreliable resource allocations - whether this is because original budget allocations are cut or resources for additional activities are allocated during the year. It is further complicated because there are links between approved budget allocations and earmarked/specific transfers such as investment co-financing or staffing for functions funded off-budget.

At the operational level, control of employment and payroll appears to operate reasonably well as does the payment function for non-salary expenditure. Also, recent gains in transparency and monitoring of procurement augur well for improvements in value for money of expenditure. However, problems with clarity of bid selection criteria and procedures mean that more has to be done to ensure such value-for-money.

The external audit by HSC is thorough and includes many important recommendations for improving expenditure efficiency, but the compliance approach – rather than systems approach – to the audit and the lack of a formal structure for responding to audit findings and rectifying problems limit the impact of the audits.

There are major concerns regarding the quality of financial data. The audit undertaken by HSC has revealed a range of issues concerning the completeness and quality of financial data maintained by Municipality of Tirana. HSC’s report for 2013, 2014 and part of 2015 has in particular highlighted the deficiencies in the inventory of assets - including their ownership, usage and valuation. The assessment highlights the risks to data integrity from lack of audit trails and use of multiple standalone computer systems to generate financial records in several important areas, even if the general use of the Treasury’s centralized receipt and payment systems provide some degree of assurance of the completeness and accuracy of the financial data.

In December 2014 the Government of Albania approved an ambitious “Public Finance Management Strategy 2014-2020”, while simultaneously approving the TAR and formulating the “National Crosscutting Strategy on Decentralization and Local Governance 2015-2020”. While the general responsibility for reform implementation oversight rests with MOF, the PFM strategy involves the entire government sector i.e. also the municipalities.

Many challenges remain for the reform agenda both at national and municipal level. In particular, (a) the current PFM reform agenda is not based on an assessment of the extent to which the main budgetary outcomes are achieved and what weaknesses in the PFM systems may be most important in hindering such achievement; (b) some reforms are unlikely to achieve their objectives unless other PFM functions have reached certain levels of performance and such linkages need to be addressed through sequencing of reforms at the technical level; (c) the Municipality still needs to resolve problems carried over from the former communes such as expenditure arrears and assets inventory; (d) capacity constraints constitute an important challenge to reform efforts, not least at municipal level; and (e) phasing in of the new delegated functions of the Municipality – with the related funding measures – is yet to be firmed up. 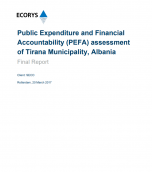