The objective of the 2021 PEFA repeat assessment is to provide the government with an objective, indicator-led assessment of the national PFM system, including the gender responsive dimension, to promote an updated understanding of the overall fiduciary environment of the PFM systems, and to assist in identifying those parts of the PFM systems in need of further reform and development. It also aimed at performing an initial Gender responsive PFM assessment to provide a baseline for a number of monitoring indicators to be identified as part of the PFM results framework. Box 1.1 below outlines the assessment management framework, oversight, and quality assurance. The assessment was funded and managed by the European Union Delegation to Sierra Leone.

The field mission began on 24th January and ended on 9th March 2022. A day’s PEFA and GRPFM training workshop was organised on 26th January 2022 with participants from key GoSL officials, development partners and CSOs. The assessment was jointly conducted by external PEFA experts and GoSL technical team appointed by MoF.

Annexes 3A and 3B provide detailed list of information used and people interviewed respectively. Other official material used for this assessment include IMF Article IV Staff Report dated April 2020, Transparency International Report 2020, Open Budget Survey Report 2020, IMF/WB PIMA Report March 2020. For the standard PEFA, all 31 performance indicators and 94 dimensions were used but two dimensions (PI-27.2 and PI-27.3) were not applicable. With reference to the GRPFM, all 9 performance indicators were assessed.

According to chart 1 below, aggregate fiscal discipline’s performance is basic. The PFM laws and regulations are strong for consolidating aggregate fiscal discipline. That said, strong PFM laws alone do not strengthen fiscal discipline but a firm political will is also needed. The current situation is mixed: whereas Anti-Corruption Commission (ACC) has taken the lead in fighting corruption, executive action on Public Accounts Committee (PAC) and audit recommendations is weak. Fiscal discipline is undermined by the constitutional powers granted the President to authorize additional expenditure without a supplementary appropriation in the event of emergency or in public interest – this could be abused.

The excessive composition variances in both economic and administrative classifications coupled with frequent, significant and non-transparent in-year budget virements (also known as budget reallocations) negatively affect fiscal discipline, also having a negative impact on strategic resource allocation and efficient service delivery. Aggregate revenues are reliable, contributing to strengthening fiscal discipline, but revenue composition is poor, a threat to fiscal discipline. The frequency of in-year budget virements affects service delivery programs according to plan. Fiscal discipline is also weakened by the size of extra-budgetary units’ revenue and expenditure, currently above 10% of central government operations. Nevertheless, GoSL’s expansion of TSA has brought more visibility on revenues of extra-budgetary units outside central government budget but not on expenditures. The general internal control framework shows reasonable performance where compliance to payment rules performs averagely, with good segregation of duties.

Delays in monitoring fiscal risk posed by SoEs (which is the case in Sierra Leone) is a threat to fiscal discipline due to the fact that losses incurred by these SoEs would have to be funded by the national budget. It is however worth noting that GoSL for the first time has compiled SoEs fiscal risk report, albeit late. Fiscal discipline is weakened by the unreliability of the expenditure budget which is leading to unpaid commitments and accumulation of expenditure arrears. Payroll management which is usually a threat to fiscal discipline, appears to show satisfactory performance mainly due to significant payroll reforms in the last three to four years. There is however a major concern in relation to weak executive action on audit recommendations, a weakness to fiscal discipline. 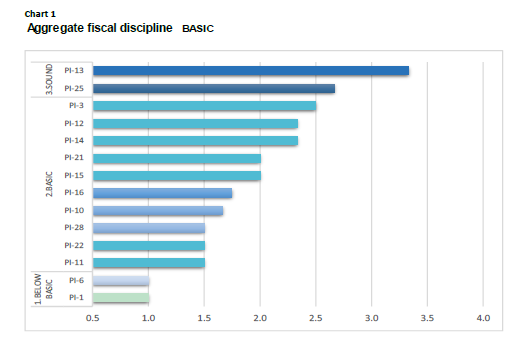 The underlying assumptions for forecasting the budget set the tone for resource allocation in a strategic manner but government’s inability to estimate the fiscal impact of changes in policy proposals is a weakness to strategic resource allocation. The approval of budget ceilings after the preparation of budget estimates does not strengthen strategic allocation of resources as changes to ceilings thereafter distorts original plans and programs. Nevertheless, the timely approval of the annual budget allowed budget units to commence their annual programmes and activities in time to ensure full utilisation of allocated resources for improved service delivery. In spite of this, resource constraints, necessitating cash rationing hampers efficient service delivery.

Strategic allocation of resources is strengthened by the relatively good revenue administration and accounting framework but insufficient cash for payment of primary services affects their efficiency and effectiveness. The frequency, significance and non-transparent in-year budget virements is a concern as it weakens strategic resource allocation. Internal audit function is reasonably good to assure that resources are properly allocated but the limited action of the executive in terms audit recommendation is a weakness. Delays in the issuance of in-year budget execution reports limits the ability of citizens to effectively track resources. 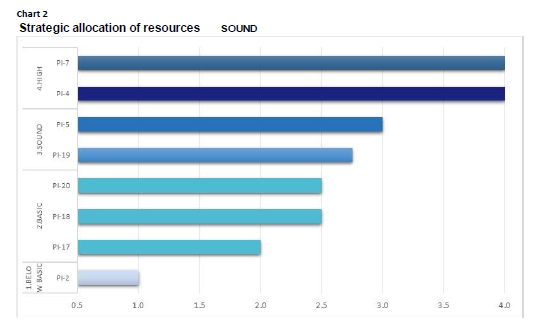 Efficient service delivery is also negatively affected by the absence of a framework to track all resources received by frontline service delivery units. The inability to track resources to frontline service delivery units could lead to shortages in some areas and surpluses in other areas. Delays in the issuance and publication of fiscal reports also affects efficient service delivery since there is less public accountability. Internal and external audit coverage and functions provide satisfaction for identifying inefficiencies in the use of public resources. Nevertheless, executive inaction on audit recommendations coupled with delayed PAC’s follow-up mechanism on implementation of recommendations are a course for concern. 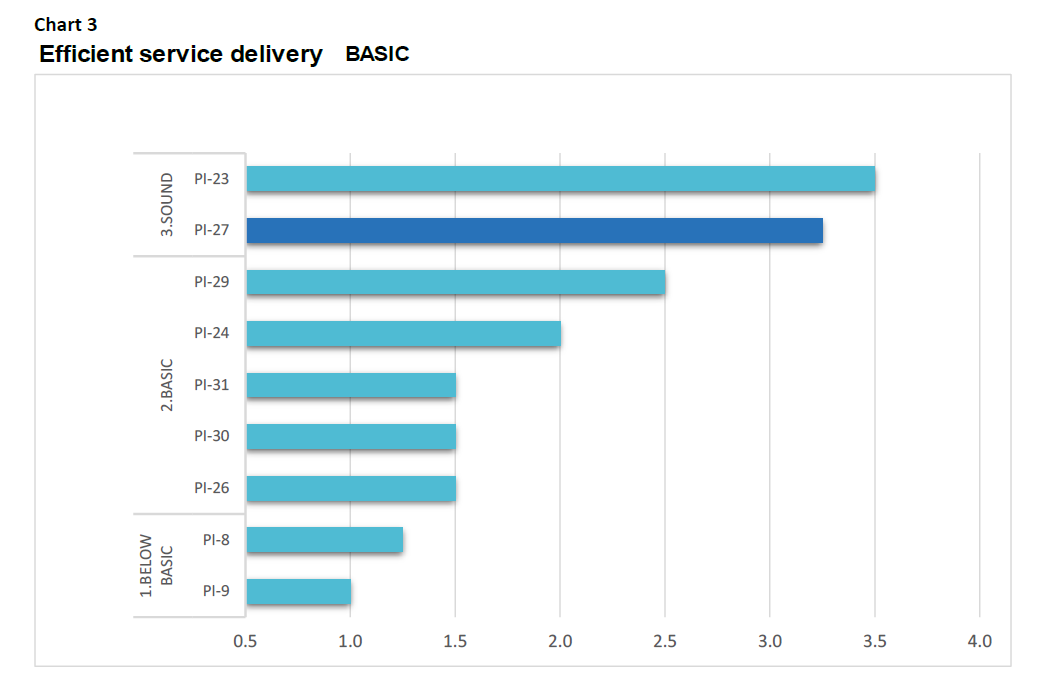 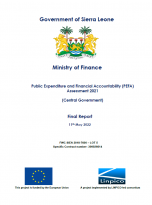