The 2020 PEFA assessment for Niue aims to benchmark PFM systems in Niue against international good practice, and to identify any weaknesses in systems which require attention. This follows an earlier PEFA assessment undertaken in 2011. The Government of Niue sought assistance from the Asian Development Bank (ADB) in conducting a PEFA self-assessment using the 2016 PEFA framework. The Government self-assessment team was led by the Financial Secretary, Poitogia Kapaga and Doreen Siataga, Treasury Accountant, supported by a PFM Specialist contracted by ADB. Peer review of the assessment report was undertaken by Iulai Lavea of the Pacific Financial Technical Assistance Centre (PFTAC). The PEFA Secretariat reviewed the assessment report and provided comments.

The assessment covers the central government, and includes public corporations. All 31 indicators covered in the 2016 PEFA Framework were covered in the assessment, though one indicator (PI-7: Transfers to subnational governments) was not scored as it was deemed to be not applicable. Field work related to the assessment was carried out in Niue over the period 27 January to 7 February 2020. A second period of field work was scheduled for 20 to 27 March 2020, designed to review the assessment results together with the associated update of the PFM Reform Plan. This had to be deferred due to travel restrictions resulting from the COVID-19 pandemic, and reliance was then placed on remote communications. The last three completed financial years forming the review period were 2016/17, 2017/18 and 2018/19. The fiscal year of the Government of Niue runs from 1 July to 30 June.

• Impact of PFM on budgetary and fiscal outcomes

The key strength of Niue’s PFM system in relation to achieving important fiscal and budgetary outcomes (aggregate fiscal discipline, strategic allocation of resources, and efficient service delivery) is that the system is centralized in the Treasury Department, and it is compact and manageable. These are important advantages given the limited number of staff available to operate the system. The Greentree FMIS is well established, well supported, and staff in Treasury and elsewhere are familiar with its operation.

Weaknesses of the PFM system which detract from the ability to achieve these fiscal and budgetary outcomes, focusing on those weaknesses which can be addressed given the limited staff numbers, include:

− The inability to keep annual financial statements (a vital element of the PFM system) up to date.

− Missing elements in the budget preparation process, notably a Fiscal Strategy to give overall direction to the budget and a system for setting expenditure ceilings to guide spending agencies in preparing budget submissions.

− Gaps in the internal control framework, such as the absence of an internal audit capacity.

− Lack of transparency in the PFM system, with very little public disclosure of key elements of the system such as budget documents, annual financial statements, audit reports, and annual reports.

The key strengths and weaknesses of PFM as identified by the performance indicators in Section 3, are discussed in terms of the overall implications for the seven pillars of PFM performance.

The budget is reasonably reliable in terms of aggregate fiscal discipline, though building project expenditures financed externally by donors into the budget has led to some increase in variances.

The chart of accounts upon which the budget is built is considered adequate. Public access to fiscal information continues to lag, as reflected in the results for indicator PI-9.

Management of assets and liabilities

Fiscal risk reporting suffers from a weak regime for the monitoring of state-owned enterprises, as reflected in the results for indicator PI-10 (particularly in relation to the supervision of SOEs). Dissemination of information on the Niue International Trust Fund is limited. Capacity to manage public investments, particularly at the project appraisal and prioritization stages, is low as reflected in indicator PI-11.

The budget currently lacks a Fiscal Strategy and a system of expenditure ceilings to guide budget preparation, and the budget calendar needs further amendment to ensure that the budget is approved before the start of the new financial year, as reflected in indicators PI-15 and PI-17.

Predictability and control in budget execution

Budget execution operates reasonably effectively, drawing on informal guidance from Treasury rather than strong formal controls. Updating of revenue legislation is underway, and should be pursued. A more formal cashflow plan could be developed for the budget as a whole at the beginning of the year (drawing on the expenditure plans being produced by spending agencies) to provide stronger guidance on spending. A formal procurement policy would strengthen this important aspect of PFM (a draft policy has been prepared, but is yet to be adopted). The internal audit function has been inoperative for a number of years, and this could be resurrected to strengthen the internal control process. These issues are reflected in the results for indicators PI-19, PI-21, PI-24 and PI-26.

The Government’s annual financial statements are well behind; further behind than they were at the time of the 2011 PEFA assessment. This is a critical area, as reflected in indicator PI-29. Work is underway to bring the financial statements up to date (through the fielding of a team from Deloitte New Zealand), but the challenge is to develop a plan to sustain this catch-up.

No issues have been identified in relation to the process of external scrutiny and audit, though these processes have been largely in abeyance for some time due to delays in finalizing annual financial statements for Government.

Following the conduct of the 2011 PEFA assessment for Niue, technical assistance was provided by PFTAC to assist the Treasury Department with the preparation of a PFM reform plan. The resulting plan, Public Financial Management Roadmap: Fiscal Year 2012-2014, ranked the indicators covered in the PEFA assessment and the results achieved by strategic importance. Indicators were grouped into first, second and third order priorities, and further ranked within these groupings. Reasons were advanced for the strategic importance of the indicators, and timelines identified for implementation of reform measures.

Further technical assistance was provided by PFTAC to assist the Treasury Department in preparing a Public Financial Management Roadmap Implementation Plan Phase 1 in 2014. The Phase 1 implementation plan was less comprehensive than the original roadmap, and focused on strengthening the budget preparation process.

Progress with the implementation of the PFM roadmap and Phase 1 implementation plan has been modest, though some gains have been made. Recent and ongoing reform actions implemented since the 2011 PEFA assessment have included:

− A draft Fiscal Policy Statement was prepared to accompany the 2019/20 Budget, but in the event was not used.

− The start of the budget calendar has been brought back progressively to 8 February (in 2019/20). Most of the extra time is given to budget preparation by spending agencies (now more than 10 weeks), but the final approval date is still after the start of the new financial year (10 July in the calendar, 31 July achieved).

− Difficulties have been experienced in the review of the FMIS framework, as the Greentree system does not accommodate commitment controls.

− In relation to oversight of aggregate fiscal risks, additional trading activities have been moved from the Budget to NPNC so the need for improved oversight has increased.

− A draft Government of Niue Procurement Policy has been prepared, but not adopted as yet.

Accompanying the 2020 PEFA assessment, and drawing on its findings together with lessons learned from previous PFM reform initiatives, is an exercise to update the Government’s PFM Reform Plan. 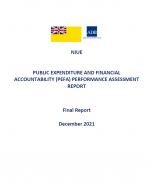