Purpose of the Assessment

The national and SNG assessments process seeks to build a shared understanding of PFM performance and those dimensions that require improvement. Both PEFA assessments will aim at: (i) informing the Central and subnational Governments on areas of PFM strengths and weaknesses; (ii) facilitating and updating the dialogue on PFM between Government and donors; (iii) helping donors build budget support programmes; and iv) provide an independent information to civil society on progress in PFM reforms. The results of the assessments are expected to assist the Central and local Governments in monitoring the implementation of Public Financial Management Reform Strategy and Intergovernmental Fiscal Relations Development Concept to achieve a PFM system that meets the requirements of efficiency and effectiveness and long-term sustainability.

The aggregate fiscal discipline is positively impacted by the credibility revenue and expenditure budgets. Both revenue and expenditure budgets are reliable at the aggregate level (PI-1 scored B and PI-3 scored A). Earmarked transfers from central government are also received in full (HLG-1 scored A). However, this is negatively impacted by the high level of expenditure composing variance (PI-2 scored C+). Strong point to note is the low level of expenditure changed to contingency vote (PI-2.3 scored A). The classification on the budget classification is good and allows transparency; and the existence and adherence to the rules for in-year budget amendments by the executive positively contribute for fiscal discipline.

The policy based fiscal strategy and budgeting pillar is found to be the weakest area in LSG Jalal Abad, where all indicators, PI-14 to PI-18 received the lowest scores. Most of the policy based fiscal strategy and budgeting functions are covered by the national government and hence, some dimensions are not applicable. The City of Jalal Abad prepares forecasts of the main fiscal indicators, including revenues (by type), aggregate expenditure, and the budget balance, for the budget year and two following fiscal years (PI-14.2 scored B).Expenditure budgets are not developed for the medium term within explicit medium-term expenditure ceilings (PI-16 scored D+).Budget preparation process also is weak (PI-17 scored D+). Clear budget calendar exits but data was not received regarding the date of submission of budgets by the budgetary units. Budget submission to the legislature is delayed (PI-17.3 scored D). Legislative scrutiny (PI-18) of budget also scored D+ mainly because data was not received regarding the scope and legislative procedures for budget scrutiny.

Public Investment Management (PI-11 scored D+) does not sufficiently reflect generally accepted good practice in project management. Selection of major investment projects is not based on predetermined economic selection criteria, rather made in accordance with the priorities established by the forecast of socio-economic development of the region, leading to inefficient allocation of scarce resources.

The rating related to the specific service delivery performance indicator (PI-8), which can demonstrate the efficiency with which services are delivered, is average (scored C+).The first and fourth dimension on performance plan for service delivery and performance evaluation of service delivery performed average while information on resources received by frontline service delivery units is collected and recorded for all budgetary institutions, disaggregated by source of funds (PI-8.3 scored A). A report compiling the information is prepared annually. Public assets management performs average, where all dimension related with financial assets monitoring, non-financial assets monitoring and transparency of asset disposals score C.

The mechanisms in place to reduce possible leakages in the system, such as payroll controls (PI-23), internal controls on non-salary expenditure (PI-25) and internal audit (PI-26) received mixed results, and rated at C+, A and NA respectively. Payroll control is strong, with the first two dimensions scoring A and the fourth dimension B. The internal audit in Jalal Abad is undertaken by the central government auditors. Financial data integrity demonstrates good accounting controls as the three dimensions performed well on bank reconciliations, suspense accounts and advance accounts.

Main strengths and weaknesses of the PFM systems in LSG Jalal Abad: 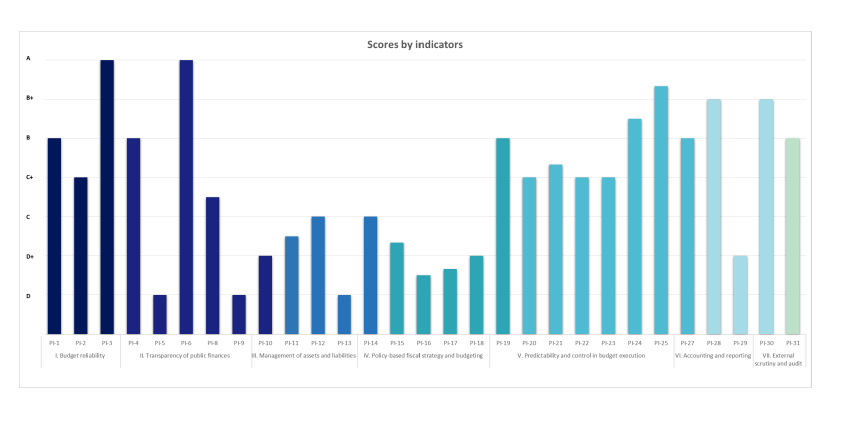 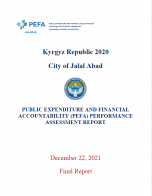