Purpose of the Assessment

The national and SNG assessments process seeks to build a shared understanding of PFM performance and those dimensions that require improvement. Both PEFA assessments will aim at: (i) informing the Central and subnational Governments on areas of PFM strengths and weaknesses; (ii) facilitating and updating the dialogue on PFM between Government and donors; (iii) helping donors build budget support programmes; and iv) provide an independent information to civil society on progress in PFM reforms. The results of the assessments are expected to assist the Central and local Governments in monitoring the implementation of Public Financial Management Reform Strategy and Intergovernmental Fiscal Relations Development Concept to achieve a PFM system that meets the requirements of efficiency and effectiveness and long-term sustainability.

The aggregate fiscal discipline is positively impacted by the credibility of the higher-level grants, revenue and expenditure budgets. Both revenue and expenditure budgets are reliable at the aggregate level (PI-1 scored A and PI-3 scored B). The transfers from central government are also received in full (HLG-1 scored A). However, this is negatively impacted by the high level of composition variance with regard to both revenue and expenditure. The expenditure composition variance was also very high at both the functional and economic levels (PI-2 scored D+). Non-tax revenue collection was below target in all the three years, though this was compensated by over collection of tax revenue resulting in achievement of aggregate revenue targets (PI-3.2 scored C). Strong point to note is that no expenditure was charged to contingency vote (PI-2.3 scored A). The classification on the budget classification is good and allows transparency; and the existence and adherence to the rules for in-year budget amendments by the executive positively contribute for fiscal discipline.

There is no data on revenue arrears of LSG Saz since the information is collected by the regional STS in Sokuluk for the entire region and is not breakable to local governments. LSG Saz effectively lacking control over revenue arrears (PI-19 scored NA). There is also no data with respect to expenditure arrears (PI-22 scored NA). The legislature grants local governments the right to borrow by issuing municipal securities on their behalf, as well as receiving budget loans. However, The LSG Saz have not borrowed, issued debt obligations or loan guarantees in the period 2017-2019. Macro-economic and fiscal forecasting at LSG Saz lack basic elements.

The policy based fiscal strategy and budgeting pillar is found to be the weakest area in LSG Saz, where all indicators, PI-14 to PI-18 received the lowest scores. Most of the policy based fiscal strategy and budgeting functions are covered by the national government and hence, some dimensions are not applicable. Fiscal forecast is prepared for three years for revenue while for expenditure, for one year only (PI-14.2 scored D). The capacity of the LSG to develop and implement a clear fiscal strategy is also found to be weak (PI-15 scored D). The fiscal strategy adopted by the LSG does include quantitative fiscal objectives, but not qualitative objectives Expenditure budgets are not developed for the medium term within explicit medium-term expenditure ceilings (PI-16 scored D). Budget preparation process also is weak, PI-17 scored D. There are no budget calendars and guidance on budget preparation. Legislative scrutiny (PI-18) of budget also scored D+ mainly because the legislature’s review does not cover fiscal policies and aggregates for the coming year as well as details of expenditure.

Low scores in PI-2 and PI-3.1 demonstrates that the PFM system with respect to efficient use of resources for service delivery does not perform well in LSG Saz. Planned service delivery activities will no longer receive the necessary funding, thereby impacting negatively on the quality of primary service delivery. Medium-term budgeting (PI-16) and public investment management (PI-11) also scored low.

The rating related to the specific service delivery performance indicator (PI-8), which can demonstrate the efficiency with which services are delivered, is poor, with all dimensions rated D, except the third dimension, on the performance plans for service delivery, which is rated A, as information on resources received by frontline service delivery units is collected and recorded for all budgetary institutions, disaggregated by source of funds. A report compiling the information is prepared annually. Public assets management performs average, where all dimension related with financial assets monitoring, non-financial assets monitoring and transparency of asset disposals score C.

The mechanisms in place to reduce possible leakages in the system, such as payroll controls (PI-23), internal controls on non-salary expenditure (PI-25) and internal audit (PI-26) received mixed results, and rated at D+, A and NA respectively. Payroll control is strong, with the first two dimensions scoring A and the fourth dimension B. There was no sufficient data to assess the third dimension, hence scored D*, affecting the aggregate score. There is no internal audit function in LSG Saz. Financial data integrity demonstrates good accounting controls as the three dimensions performed well on bank reconciliations, suspense accounts and advance accounts.

There is also no external audit function at the subnational level of the local self-government of Saz (PI-30 scored NA). The national level Account Chamber performs the external audit of the consolidated budget performance report of Sokuluk region.  The external audit reports relating to the LSG Saz were not reviewed by the legislature and this has deprived the parliament from overseeing whether public resources are properly spent as planned (PI-31 scored NA).

Main strengths and weaknesses of the PFM systems in LSG Saz 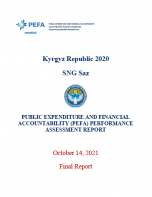