Mongolia has achieved better than basic levels of performance in most aspects of public financial management. The budget process is evolving to enable the government to better respond to the fiscal risks associated with volatility in commodity markets through, for example, enhanced top-down fiscal strategy setting. This is reflected in budget outturn data which, prior to the COVID-19 pandemic, were close to original budget estimates. Enhancing this capability will in future be facilitated by planned improvement in medium-term-performance-oriented approaches to budgeting, enhanced revenue forecasting (which at this time does not accurately project the composition of receipts), and full integration of capital and recurrent budgeting processes (which are identified as weaknesses in this report).

Budget execution is sound, with reliable systems for administering the collection of revenue and controlling the release of budget appropriations, including operational cash management, effective internal controls of payroll and non-payroll expenditures, and regular bank reconciliations. This is reflected in low levels of expenditure arrears. Nonetheless, the effectiveness of budget execution, and the ability to respond to any future cash shortfall, would be enhanced if commitment control were better embedded in systems and more broadly applied. Annex 5 provides a summary of observations on internal control.

There is strong external engagement and oversight of the executive government in performing public financial management. This includes strong parliamentary engagement in planning and approving the budget, and effective accountability mechanisms provided by the Auditor-General in accordance with international standards. However, internal audit is still in a transition from traditional models of financial control toward an approach based on international models of good practice.

Mongolia has realized a high degree of transparency in its budgeting, budget execution, and citizens’ participation. The budget process is open, with all relevant documents published and it includes opportunities for citizen engagements. There is regular and timely reporting of budget execution by the Ministry of Finance, and this is complemented by the requirement for ministries and agencies to publish their data on the Glass Account Portal. However, this transparency relates mostly to descriptive data rather than analysis of key the areas of budget execution performance, results of service delivery, or fiscal risks - including those emanating from PPPs, ownership of public corporations, and subnational governments (SNGs). Accounting and reporting is not yet performed in accordance with the legally mandated international accounting standards, such as the International Public Sector Accounting Standards (IPSAS).

While there are no recognized off-budget activities and there is a substantial amount of data gathered from public enterprises and subnational governments (the majority of which is published), such data is not consistently consolidated and analyzed to identify the fiscal risks that - international experience demonstrates - exist in these sectors. Debt management is an area of high performance but there are some weaknesses in the availability of data regarding financial and non-financial assets and their performance. 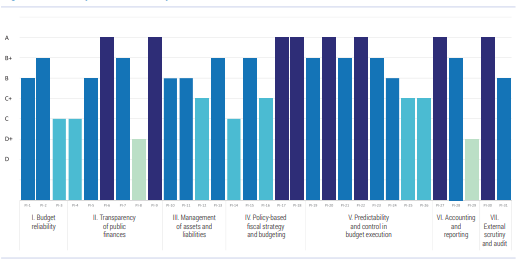 The main objective of PEFA assessments and the PFM reform they underpin is to support sustainable development and better and more effective service delivery outcomes that meet citizens’ needs and priorities. Progress is measured through the contribution of PFM systems and processes to the following three main fiscal and budgetary outcomes.

Attaining aggregate fiscal discipline in Mongolia is challenged by the inherent volatility of a resource rich economy. While Mongolia has benefitted from strong growth in revenue from resource extraction and export, it has at times struggled to respond when international commodity markets cause these revenues to fall unexpectedly.

The introduction of formal medium-term fiscal strategy setting within the budget process, which is approved by Parliament, has created a context for broad dialogue regarding fiscal policy. The parameters of fiscal policy are governed by the expenditure growth, debt, and deficit rules set out in the Fiscal Stability Law.

In addition, independent oversight of revenue forecasting is provided by both the Auditor-General and the Fiscal Stability Council in the context of budget approval, which offers some assurance as to the technical validity of revenue projections. The establishment of the Future Heritage Fund creates a potential platform for ensuring that windfall gains are set aside for the benefit of future generations.

Over recent years, prior to the COVID-19 global health crisis, the budget surplus/deficit realized has been better than the original budget plan, largely because expenditures were consistently lower than planned and revenue exceeded original estimates, which provides some evidence of success toward achieving fiscal discipline

However, there are aspects of the PFM framework that may undermine the ability of the government to respond to external shocks. Among these are weaknesses in the medium-term approach to budgeting, apparent lack of analysis and transparency of fiscal risks associated with state-owned enterprises (SOEs) and certain type of PPPs (such as Build, Operate, Transfer initiatives), and uncertain recurrent costs associated with Mongolia’s substantial public investment spending. The existence of large tax arrears and tax expenditures suggest that there may also be policy and administrative limitations in the capacity to raise additional taxes from non-mining sources if/when required. While debt management practices are strong, there is a need to broaden the depth of the market for government debt to ensure that borrowing can be undertaken efficiently if/when required. In addition, while there is capacity to undertake cash forecasting, the absence of effective commitment control will make it difficult to control the pace of spending in circumstances where projected cash reserves fall below minimum levels.

The budget process in Mongolia is well understood by the participants and contains key elements that support strategic resource allocation, including top-down policy setting, expenditure ceilings, criteria for prioritizing public investments, and a budget timetable that provides budget governors with adequate time to make well-articulated submissions. Within the Glass Account Portal and regular budget execution reports there is reliable information on how the budget is being used. Nonetheless, while there have been some pilots of a performance-informed programmatic approach to budget formulation in service delivery units, including strategic plans in those pilot ministries, this is not yet the norm across all budget entities and it is not clear that such data, and the broad data sets available in the Glass Account Portal, are being used to inform policy prioritization. As medium-term estimates in the budget are not reliable, prior year outcomes are used as the budget baseline, which results in a mostly incremental approach to strategic resource allocation.

Efficient service delivery is supported by sound revenue administration and systems that support in year resource allocation, including timely accounting for and transfer of collections to the TSA as well as cash-flow forecasting. There is a reasonable degree of predictability in the release of the budget as significant in-year adjustments to the budget are made not more than twice a year and the composition of expenditure does not vary by more than 5 percent. The timing and value of the budget released is sufficient to meet financial obligation as these emerge, as shown by the low level of expenditure arrears.

Systems and controls over payroll and non-payroll spending on service delivery, are robust – noting, however, the absence of effective commitment control. Procurement processes are governed by comprehensive rules and generally result in transparent and competitive methods being applied.

Data available to inform services delivery decision-making is robust. Bank reconciliation is understood to take place on a regular basis, resulting in reliable data within core systems. While such data are available within respective service delivery units, the fact that much of the data reside within disparate systems has required development of specialist reporting tools for reporting on a consolidated basis. The aggregate reporting undertaken by Treasury is timely but does not fully align with the international standards adopted (IPSAS). Nonetheless, the external audit process aligns with international processes, there is good follow-up of audit recommendations, and Parliament scrutinizes audit reports on an open and timely basis.

Comparison with the previous assessment in 2015 using the 2011 framework

The greatest gains between the 2015 and 2021 assessments have been made in the areas of budget credibility and the predictability and control of budget execution, which includes improved scores for performance indicators 1, 2, and 3, which compare budget outturn to the budget, as well as better scoring for indicators PI-13 to PI-18, which (in the 2011 framework) relate to revenue processes, budget release, cash and debt recording, as well as payroll controls.

The elements that have remained relatively consistent over time include comprehensiveness and transparency, policy-based budgeting, accounting and reporting as well as external scrutiny and audit. It is noted, however, that the scoring of PI-7 has improved, which reflects the significant reduction in the incidence of extrabudgetary operations.

The overall improvement in scores between the two assessments reflects the concerted effort that the Government of Mongolia has made toward improving PFM systems in cooperation with its development partners – noting, however, that some important weaknesses remain evident in the scoring and associated analysis.

The GoM has gradually undertaken reforms to strengthen fiscal discipline and the PFM system. The first phase of reforms between 2003 and 2008 established the basic elements of the system, including strengthening internal controls, cash management, and accounting and reporting. The second phase of reforms between 2008 and 2011 included some improvements in fiscal policy, budget planning, and decentralization of roles and resources to subnational governments. More recently, the GoM has been pursuing a number of initiatives to improve macro-fiscal management as well as supporting enhanced impact of government service delivery. These initiatives include the following.

• Committing to building the architecture for gender-based approach to budgeting.

To bring together the elements of PFM reforms into a cohesive strategy with a perspective that reflects Mongolia’s vision over the medium term, consistent with the “Action Program of the Government of Mongolia for 2016-2020” and the “Sustainable Development Vision 2030,” and to provide a framework to prioritize, coordinate, and sequence initiatives and actions across the range of PFM functions, a Working Group was established by Finance Ministerial Order #389, on December 28, 2017, to develop a medium-term (3-5 years) plan and strategy for budget and financial management reforms. Subsequently, a high-level PFM Reform Strategy was prepared and approved by Ministerial Order #234 of 2018.

A PFM action plan was then produced to support the PFM Strategy and it has undergone several iterations in execution and was elaborated most recently by the Ministerial Order No. #192 on August 30, 2019. A more detailed activity-level Action Plan was then developed and approved by the State Secretary of the MoF (Order #A281) on September 30, 2019. Good progress has been reported so far by the government on the implementation of the action plans; thus together with the more recent policy documents of the government (e.g., Mongolia Vision 2050, the Government Action Plan 2020- 2024, and the MTFF) the current PEFA assessment is intended to serve as a basis for defining the PFM strategy priorities and the action plan for the next period. 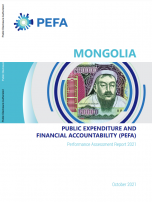