The purpose of the Catalan Government at conducting this partial PEFA self-assessment is obtaining a complete diagnosis about the quality and performance of its current public financial management (PFM) system, focusing on its budgeting system, and aiming to help designing a sound roadmap of budgetary reform.

This diagnosis is expected to help identifying the most relevant weaknesses of the budget system and provide relevant inputs to continue building up the current 2nd wave of budget reforms of the Catalan Government. Current budget reform was started in 2017/2018, adding new steps to previous reforms conducted since 2005/2006. This reform aims to improve fiscal discipline and sustainability, reinforce the strategic allocation of resources, impulse operational efficiency and effectiveness and increase budget transparency by getting closer and accessible budget information and data to citizens. These reforms include focus lines such performance-based budgeting (introduced in 2006), long and medium-term budget planning (introduced in 2008/2009), spending reviews (introduced in 2017/2018), policy evaluation and fiscal/budget monitoring.

After 2-3 years of reform implementation, a robust diagnosis of the budgetary system in this moment is considered meaningful to define and plan the next reform stages for the coming years. Current high indebted situation (33.4% of GDP in 2019) and coming challenges concerning expenditure pressures associated with an aging population and climate change emphasizes the need of having the strongest budgetary institutions and management.

Main strengths and weaknesses of the PFM system

PEFA assessment has provided a complete judgement about the budgetary system of the Catalan Government, facilitating scores for 16 indicators and 42 dimensions of the PEFA 2016 SNG framework. Scores obtained by each of the 16 indicators showed an aggregate share of “A” and “B” scores of 37.5% of all indicators, with a 18.8% for both “A” and “B” scores. A basic level of performance (“C” score) has been obtained in 31.3% of the indicators and 12.5% of indicators has shown a performance below the basic level (“D” score). Score shares considering the 42 dimensions show some differences regarding the 16 indicators distribution, where “A” and “B” scores have a share of 45.2% (31.0% of “A”s and 14.3% of “B”s) of all dimensions, “C” scores a 23.8% of and “D” a 14.3%. Not available scores (“NA”) have been obtained in pillar 1 (budget reliability) indicators and dimensions as well as only 2017 budget was passed in the last three completed fiscal years, affecting the 18.8% of indicators and the 14.3% of dimensions. Mention that these NA scores have importantly affected the share of “A” and “B” scores as pillar 1 scores, if considering initial extended budget estimates as the initial estimates of a passed budget, would have been “A”, “B+” and “A” in the corresponding indicators.

Achieved PEFA scores demonstrate that Catalan Budget system has a notable level of development, with some areas with advanced development and strong foundations in some other, however there are few areas below a basic level, which requires attention and improvement actions.

High indebted situation of the Catalan Government (41% above the average of the debt-to-gdp ratio of Spanish regional governments in 2019) implies the need to construct a fiscal consolidation path for the next years in order to build a fiscal sustainable path. Catalan Government budget reliability can significantly contribute to accomplish the fiscal targets to be set, nevertheless, the existing troubles to present and pass draft budget can considerably undermine such capacity. Moreover, the current use of MTBF as a rolling multi-year resource envelope is helpful to construct such path, but its power is weakened by not being enforced by adding credible and binding multi-year aggregate and sector ceilings before the budget requests stage.

In addition, previous long-term fiscal sustainability exercises have proved to be useful, but they need to help constructing a sound fiscal consolidation path, they need to be institutionalized and performed periodically to help building a long-term fiscal strategy and providing a path to be routed by successive MTBFs and annual budgets.

From another side, the experience and first results of the Catalan spending review system has shown that significant fiscal space can be obtained, but need to be reformed to be more feasible in term of time and required resources and institutionalized to reach a more systematic practice.

After around 15 years of introducing performance-based budgeting, producing and reporting performance information within the budget cycle has helped to start introducing performance culture and pressure within a government with an administrative organizational culture. Even if the system has been simplified and performance information has become more selective and improved its quality, it is still mainly used for presentational and transparency purposes, not playing a key role during budget allocation decision-making. Although there are solid budget guidelines and forms for the budget request stage, reinforcing performance and evidence requirements to justify proposals may contribute to facilitate a more strategic allocation of resources.

Nevertheless, the use of performance and evidence information to help prioritization needs to be framed in concrete determination of strategic priorities and a clear definition of available resources. Annual budget priorities are included in the current budget circulars, nevertheless these are broad priorities. Current efforts for introducing Sustainable Development Goals (SDGs) and social progress and welfare indicators in the budget system may be helpful to support the definition of specific priorities. In regard of creating a resource restriction framework during the budget elaboration process to strengthen prioritization, the current mainly based bottom-up approach fails at accomplishing this result. Multi-year aggregate and sector ceilings should be consistent with resource availability and clear budget priorities, and approved and endorsed before the budget requests stage, and not later, as is the current situation.

Accordingly, in the capital expenditure programming system, despite existing certain prioritization methods, these must be enforced and disclosed, taking full advantage of an increasing appraisal practice (based on economic evaluation methods) for major projects and being complemented by other relevant methods for non-major projects.

Recurrent use of performance information for budgeting and reporting purposes, a raising institutionalization of policy evaluation and the development of spending reviews has helped to increase pressure for improving efficiency of resources for service delivery. However, this has not been accompanied by a broader performance management reform, and has not involved other key areas such civil service or organization management.

Furthermore, existing performance reporting system needs to be more formalized, structured and spread to assure an effective accountability and pressure for performance, and policy evaluation and spending reviews, which have shown promising results, but need to increase on its practice, becoming more systematic and integrated within the budget cycle.

To support a more efficient use of resources, and the related analytical processes and decisions, robust financial and non-financial information systems are needed. Catalan budget system counts with sound budget structures and financial information, both from budgetary (modified cash basis) and financial accounting (accrual basis), and quality of performance has been growing, even though there is an important margin of improvement. Nevertheless, there is not a generalized used of cost accounting in the Catalan public sector, which restricts the capacity to improve efficiency and support expenditures scrutiny, evaluation and review.

Performance changes since the previous assessment

This is the first PEFA assessment for the Catalan Government, so there are no changes or improvements since previous assessments. In addition, no other internationally accepted or recognized PFM assessment framework has been used for assessing Catalan PFM system. Future expected PEFA assessments would provide a basis to assess the improvements accomplished by planned reform actions.

Prospects for reform planning and implementation

Aligned with the goals defined in the current budgetary reform, and using the inputs the PEFA assessment, a list of 35 tentative reform actions have been defined by the Directorate-General of Budget for the 2021-2024 period. These suggested reform actions will be presented to the coming Catalan Government after the 2021 elections and can be found as an annex (Annex 3) within this PEFA report.

These reform actions aim to address both detected weaknesses and relevant strategic lines of improvements, being focused on elements contained in pillars II, III and IV of the PEFA SNG framework. The implementation of these reform actions are expected to substantially improve the budgetary system, and so the PEFA scores, where 65.7% of these actions would directly improve them.

Some of the reform actions are not new to the Catalan Government, where the PEFA assessment helped to confirm and verify previous detected areas where improvements were needed. In this sense, 31.4% of the reform actions are currently under development. For the rest of reform actions PEFA assessment has brought the opportunity to identify and define them or to highlight the need to formally plan previous envisaged actions. Among the planned actions, the majority are under the functions and responsibilities of the Department of Vice-presidency, Economy and Finance (85.7%), being mainly concentrated in the DG Budget (74.3%), and where actions outside the functions of this department are primarily associated to the Legislative branch, more precisely to the Parliament and to the Catalonia’s Public Audit Office. 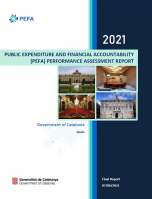