The purpose of this PEFA assessment is to provide an objective analysis of the present performance of the public financial management (PFM) systems in Rucheng County, using the new 2020 Subnational PEFA Framework. The results of this assessment will inform the design of the Hunan Subnational Governance and Rural Public Service Delivery Program-for-Results lending operation and local specific PFM reform initiatives and appropriate technical support from development partners, as well as provide a baseline against which the future developments of PFM systems of Rucheng County can be measured.

The assessment covers the county of Rucheng, more specifically its government administrative units (GAUs, 行 政单位) and public service units (PSUs, 事业单位), including budget-funded service delivery entities such as schools, hospitals, or agricultural service centers. While there are no extra-budgetary units (EBUS) in Rucheng County, the social security fund is managed separately from the core budget system—that is, the general public budget (GPB) and the government fund budget (GFB), and thus is classified as an extrabudgetary operation in this assessment. Following China’s legislative classification, state-owned enterprises (SOEs) are assessed as a public corporation (PCs). China’s laws and regulations prohibit any SOE, including local government financing vehicles (LGFV), from financing government investment projects on behalf of the government. LGFVs that have been undertaking quasi-fiscal operations are required to be transformed into commercial entities, operating according to market rules, producing goods and services at market price, and bearing risks on their own. The government does not have any legislative obligation to bail out any SOE. Considering that they may present potential fiscal risk to the government, Annex 7 provides complementary information on the financial management performance of the LGFV in Rucheng. At the time of assessment, there was one LGFV in Rucheng still in the process of transforming into a commercial entity.

The assessment was undertaken from March 2 to 6, 2020. The fiscal years (FYs) covered for indicators that require an assessment of a three-year period, are 2016 to 2018.

Impact of PFM systems on the three main budgetary outcomes

Overall, the PFM systems of Rucheng perform well in budget preparation process, in-year budget reporting and reporting of extra-budgetary expenditures, its internal control system, financial data integrity, and legislative scrutiny, particularly of its annual audit reports. The main weaknesses pertain to budget reliability and budget transparency, performance and medium-term orientation of the budget, public investment and procurement management, the predictability of in-year resource allocation, the monitoring of expenditure arrears, annual financial reporting, external audit, and public access to fiscal information. The context in which Rucheng sets its budget is important. Rucheng generally complies with the PFM practices mandated by the central and provincial governments. The predictability of information on transfers to be received from higher-level governments (HLGs) need to be improved to better the county’s PFM performance.

The budget fails to impose much fiscal discipline in Rucheng. The variation between outturn and budget estimates for aggregate expenditure (PI-1.1) and expenditure composition (PI-2.1) are both rated D, and there are significant budget adjustments for expenditures within the FY (PI-21.4 is rated C). The uncertainty caused by HLG transfers (HLG-1 is rated D) certainly contributes much to the SNG’s poor estimation of its expenditures.

In-year policy change also makes it challenging for the SNG to project its own-source revenue (PI-3 is rated D).

Effective control over expenditures by budgetary units helps to enhance fiscal discipline. No government operations take place outside financial reports (PI-6, rated A). Payroll control is effectively supported by centralized payment arrangements and auto-reconciliation through an IT system (PI-23.1 and PI-23.3 are rated A). A strong internal control of non-salary expenditures (PI-25, rated B) and a solid internal audit system (PI- 26, rated C+) have ensured strict control over spending during budget execution. Moreover, there is a good reporting and recording system for debts (PI-13.1, rated C) and contingent liabilities (PI-10.3, rated B).

Major threats to fiscal discipline in Rucheng are posed where critical control and monitoring functions are lacking in the PFM system. System weaknesses leading to these threats include the entanglement of government units and the LGFV; the fact that investment financing is delinked from the government budget; that large procurements and contracts are supervised by the DRB, not by the Finance Bureau; that expenditure arrears and small procurements are not monitored; that there is no effective supervision of PCs; and that, while the Finance Bureau monitors financing by the LGFV, there is no fiscal risk assessment or monitoring of the operations of other PCs. In combination, this suggests a lack of institutional assurance for hard budget constraints. Consequently, off-budget borrowing may arise.

The main PEFA indicator concerned with medium-term budget strategy, PI-14, has been rated D+. There is no evidence that macroeconomic indicators are sufficiently considered during budget preparation, that a mediumterm budget strategy is prepared, or that the fiscal impact of policy changes is estimated. In addition, costing information of major investment projects is not included in the budget documents (PI-11.3, rated D), and clear rules for prioritizing major investments are missing (PI-11.2, rated C). The oversight arrangements with a view to the budget preparation process and legislative scrutiny of the budget have been assessed as good (PI-17, rated B and PI-18, rated C+).

Other indicators that relate to the strategic allocation of resources were rated as satisfactory. Budget documentation meets all basic requirements (PI-5, rated C), but the budget classification system is not fully in accord with international standards (PI-4, D).

Required mechanisms are in place to reduce the possible leakage of funds, such as the asset management system (PI-12, C) and the internal controls over payroll (PI-23, C+) and non-salary expenditures (PI-25, B).

As for the procurement management system, data are not fully available to allow for an evaluation of the procurement monitoring and procurement methods (PI-24.1 and 24.2, both D*), and there is no reasonable information disclosure (PI-24.3, D), though the complaint solving regime is pretty good (PI-24.4, A).

In sum, the Rucheng PFM systems perform at sub-optimal level. With the right regulatory framework set by the central and provincial government, there is great potential for improvement.

The assessment results shall be interpreted with an important caveat in mind. As Annex 7 shows, LGFVs carry out sizeable quasi-governmental activities while operating outside of the PFM system (Annex 7, PI-6, D). The Rucheng Government has basic monitoring obligations over the investment projects that LGFVs implement (Annex 7, PI-11.4, C) and their liabilities (Annex 7, PI-13.1, B). A comprehensive assessment for LGFVs is warranted to reveal the impact of LGFVs on the PFM performance of Rucheng County.

China has launched ambitious fiscal and taxation reforms since 2014. The revised landmark Budget Law and its associated directives have laid out a solid foundation for a modern fiscal framework. The main motivation has been to better serve the transformation of the government functions from boosting growth more toward delivering quality public goods and services. The major changes mandated by the revised Budget Law fall into five areas: 1) making the budget comprehensive and transparent; 2) improving credibility and mediumterm perspective of the budget; 3) allowing provinces to borrow on budget within the regulatory framework;

The reforms that are currently being pushed by the Central Government (CG), and fully embraced by Hunan Province, provide a good opportunity and foundation for the county government to carry out the needed PFM reforms. PFM in China is a long-term endeavor, requiring concerted effort of all tiers of government and coordinated adaptation of all public-sector institutions. 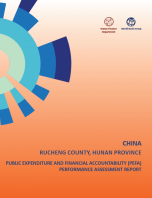