Norway is a partner in the Public Expenditure and Financial Accountability (PEFA) programme. The PEFA Secretariat has developed a new assessment framework for gender responsive public financial management (GRPFM). This framework is put forward as a tool to be applied on a voluntary basis. A test version of the framework has been piloted in Ukraine, Indonesia, Tonga and several Caribbean countries. Based on a request from the PEFA Secretariat, the framework has been tried out in Norway. In line with the framework’s defined scope, this assessment will focus on the operations of the central government1 but still has a limited institutional scope and targets some main public financial management (PFM) instruments.

In this regard, it is important to reflect on the fact that many central instruments of Norway’s “equality politics” are built into the Norwegian welfare system: more specifically, through the services provided to citizens at the municipal level, following national standards set by Parliament or the responsible sectorial ministry’s annual reporting. This latter includes performance data related to the volume and quality of all types of services. Based on this, it is pertinent to question the extent to which a focus on central government—and thus a partial analysis of the gender responsiveness of PFM systems in one tier of government—provides a meaningful picture of gender responsiveness. A broader institutional scope, with the inclusion of a broader set of sectors and their instruments and the inclusion of all tiers of government, might have been more meaningful. Such a scope, however, is beyond the defined scope of the GRPFM framework.

From a Norwegian government perspective, the decision to apply the framework was taken with a view to critically exploring how the new PEFA assessment framework for GRPFM would play out in a country that ranks high on gender equality and where the tradition of ministerial rule2 is strong and builds on a high degree of delegated authority to budget entities and lower tiers of government. The principles of ministerial rule entail that every minister stands responsible to Parliament for politics and actions in their sector.3 Two reflections are worth highlighting. First, there are distinct differences between highly developed modern welfare states (such as Norway’s), with legally sanctioned equal opportunities for women and men, including ample security for every individual, and developing countries with legal and economic voids in relation to equality, including the dimension of gender equality. Secondly, the PEFA GRPFM framework presumes that blueprint diagnostic tools for exclusively measuring gender budget responsiveness are meaningful and beneficial.

As will be illustrated in this assessment, the Norwegian public sector governance system is built on ministerial rule and, unlike many other states’ “government machineries”, is built on a high level of trust between the government and the governed; moreover, in Norway, monitoring mechanisms are oriented toward the delivery of measurable results at all levels and in all sectors. These Norwegian public sector governance principles mean that control mechanisms rely on defined outcomes—e.g. how public funding is used—which are monitored through a highly developed national statistical system, periodic evaluations and results reporting on outcomes or impacts. The PEFA GRPFM framework presumes that any central government governance is orientated toward detailed centralized decision-making, coordination and control mechanisms or (detailed) quantitative accounts of the state of play. Throughout the report, and for each indicator and dimension, the assessor has added comments on how the Norwegian public sector governance principles pan out in the assessment in relation to the GRPFM criteria.

This assessment of the National Government of Norway’s GRPFM has been compiled using the January 2020 version of the PEFA supplementary framework for assessing GRPFM, recently developed by the PEFA Secretariat. The PEFA GRPFM framework comprises nine indicators built on the PEFA framework, which are geared to collect information on the degree to which a country’s PFM system is gender responsive.

It is quite striking how the PEFA GRPFM results portray the current situation in Norway. The results are far from encouraging when using this methodology. This may come as a surprise, since Norway performs well according to international indicators measuring gender equality, and has a legacy as a society where many dimensions of equality are promoted and are part of its basic constitutional values and social fabric.

The results point to the need to reflect on the assumptions within which the GRPFM framework has been grounded: i) the focus on central institutions of government; ii) a blueprint approach, with the shortcomings such approaches represent; iii) the “moment” analysis, focusing on one specific year without any analysis of the political-historical dynamics or the particularities of that specific moment or year (see Box 1); and iv) the assumption of a clear linkage between budget expenditures and (gender) equality measures and outputs, outcomes and impact. No one would suggest that Norway has not achieved a high level of gender equality, despite not having used a tool like this framework. The results, taken together, point toward the need for revisiting the framework to open up for a broader, more flexible and context sensitive analysis of equality.

Box 1: GRPFM—A moment analysis versus an empirical account of the gender equality and welfare policies

In addition to these initial reflections and comments on the underlying assumptions of the GRPFM framework, the assessor provides specific comments on each indicator. The comments reflect a dual focus.

The first focus has been to explore how the PEFA GRPFM process can inspire the adoption of additional measures in Norway with a view to strategically using the PFM instruments, processes and systems to strengthen the transparency and accountability of equality responsiveness and gender responsiveness. Some recommendations are put forward and are based on the work undertaken as part of this assessment.

Secondly, the focus has been placed on assessing the foundational assumptions of the framework and the potential bias of the GRPFM framework itself (see points i–iv above).

The findings and results from this experience in Norway point to the framework having been developed based on a set of assumptions that are not valid in the Norwegian context and may not be valid in other countries and contexts.

Elaborating further on the four overarching assumptions mentioned above, the GRPFM presumes that PFM systems, with the budget cycles and management processes underpinning them, are central to the design and implementation of gender responsiveness within public sector governance. Moreover, the PEFA GRPFM, like the Public Expenditure and Financial Accountability Assessment Framework, was designed with an emphasis on centralized processes of coordination and decision-making at a detailed level and with a quantitative bias. As this report shows, management principles that rely on ministerial rule, delegated authorities and less-detailed control mechanisms will find the assessment tool challenging—in terms of access to data, disclosure of information and the time-consuming task of document review and analysis.

Taken together, it is challenging to meet the assessment criteria and comply with the methodological approach(es). Indeed, for several indicators, a GRPFM-compliant full-fledged analysis would entail the collection of data from each individual government entity (see Box 1 for more information). For several of the information requirements, no central data collection and coordination mechanisms are in place.

All in all, and in view of the experience gained through this process, it is important to critically scrutinize assessment frameworks as part of an on-going process of learning and institutional development. This critical reflexivity has proven to be important in the context of the PEFA GRPFM framework, which will like be adopted on a voluntary, but still negotiated, basis in developing countries. Open, transparent and active engagement through a dialogue on the biases in design of any assessment tool is therefore paramount to avoid impositions of structures or mechanisms unfit for the purpose in those countries subject to assessments. This report aspires to create a space for reflexivity as part of the PEFA GRPFM assessments and to provide a basis for discussing how plurality in the design of equality measures can be (even) better reflected in the GRPFM and other related processes.

The main interlocutors responsible for relevant policy areas in the National Government of Norway are the Ministry of Finance and the Ministry of Culture, both of which have agencies responsible for managing and promoting compliance with the legal and regulatory instruments (e.g. the Equality and Ant-Discrimination Act), coordinating the national reporting on gender equality and managing the Norwegian Instructions for Official Studies central to the preparations of new initiatives included in the budget elaboration process. I would like to thank all the stakeholders who shared their views and provided the information necessary to carry out this assessment. A special thanks goes to the peer reviewer Arni Hole (independent consultant and former Permanent Secretary in relevant quality policy areas) and to Håkon Mundal in the Norwegian Agency of Development Cooperation. 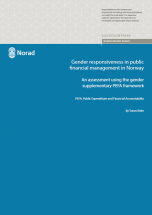