1. Jordan has been receiving assistance towards the improvement of public financial management (PFM) for some 15 years, principally from USAID and the European Union (EU). EU assistance, which has mainly been provided through budget support, has generally been partly conditional on the maintenance of macro-economic stability, the implementation of a continuing programme of public financial management (PFM) reform, and further improvements in the transparency of PFM. This assessment, which is sponsored by the EU, is intended to provide an overview of progress in PFM since the previous assessment in 2016, and at the same time to establish a benchmark for the future measurement of progress against the criteria set out in the Performance Measurement Framework published in February 2016 by the PEFA partners.

2. The assessment focuses mainly on budgetary central government (BCG - the 77 Chapters of the main budget) which accounts for over 95 per cent or more of expenditure under the control of central government bodies other than the Social Security Corporation. But it also covers at various points the revenue and expenditure of the 25 extra-budgetary Government Units (GUs) which are increasingly treated in the same way as BCG in annual budget legislation and for the purposes of expenditure and cash management. (Many of the bodies which were treated as GUs in 2016 were moved into the main budget in 2019.) Most of these bodies fulfil administrative or regulatory functions, but a few are public utilities or even trading bodies. Sub-national governments play a relatively minor role in PFM in Jordan, being responsible in total for about 6 per cent of General Government expenditure, more than half of which is attributable to the Greater Amman Municipality (GAM). The funded social security scheme functions separately outside the main budget or that for the GUs; since the scheme is not yet mature, it is running a surplus, much of which is invested in debt issued by the Government to finance the budget deficit.

3. Jordan has continued to face an extremely difficult macro-economic environment during the period covered by this assessment (2018-20). This primarily reflects the impact on Jordan’s economy and society of the intensified conflicts in Syria and Iraq, which have damaged Jordan’s trade and investment, and precipitated an influx of refugees who continue to impose heavy strains on Jordan’s public services and public finances. The country’s tax and other revenues have fallen well short of what is needed to finance the maintenance of adequate public services while at the same time meeting the infrastructure needs of a rapidly expanding population, although Revenues are now (late 2021) on an upward trajectory and is expected to exceed the pre-pandemic level in 2022. Meanwhile the proportion of GDP collected as tax revenue remains some 5 percentage points lower than it was in 2007 as a result of decisions on tax rates and exemptions. Jordan has thus remained dependent on external help from the Gulf Cooperation Council, European and North American development partners to balance its external payments and to finance significant public investments.

4. Much of the framework within which external assistance has in recent years been provided to Jordan has been set by the Stand-By (SBA) and Extended Fund Facility (EFF) arrangements concluded since 2012 with the International Monetary Fund (IMF). These arrangements have looked to achieve substantial fiscal consolidation through by increasing tax revenues, reducing the losses incurred by the electricity supply company (NEPCO), containing other current expenditures, and reprioritizing public investment. At the same time PFM improvements were to be sought by improving cash forecasting and control, especially by implementing the commitment control module of the Government Financial Management Information System (GFMIS) and extending the coverage of the Treasury Single Account (TSA) at the Central Bank of Jordan (CBJ). Other achievements have been the reorganization of public debt management and publication of a new debt management strategy, more complete and transparent budget execution reporting, and production of a road map for the introduction of full accruals-based budgetary accounting.

5. This assessment shows that Jordan has generally been able since 2016 to maintain aggregate fiscal discipline, with effective cash and debt management, and prompt and accurate budget execution reporting. Aggregate expenditure has been kept within budgeted amounts, although at the cost of incomplete realization of capital investment plans. Actual domestic revenue has been fairly close to forecast until 2020 when there was a large shortfall as a result of the impact of the Covid-19 pandemic. The coverage of GFMIS has been substantially extended, and payroll control and procurement management are generally satisfactory.

6. Continuing efforts have been made since 2016 to improve the strategic allocation of resources, through the preparation of strategic plans for service delivery, and the requirement for key performance indicators (KPIs) to be specified for every Department’s expenditure programmes against which actual achievements are measured. For the moment, however, the KPIs for the most part are defined in terms of outputs or activities rather than outcomes in terms of service improvements, and the budget documentation does not provide any clear indication of the actions to be undertaken in order to achieve given outputs, let alone outcomes. The Government’s Vision 2025 document and the successive Executive Development Programmes provide a framework within which specific decisions on investments or other actions to achieve service improvements should be fitted. The establishment in 2017 of the public investment management unit in the Ministry of Planning and International Cooperation (MoPIC) as a prior action under the EFF should have further strengthened performance. This administrative reorganisation was intended to be supplemented by systematic arrangements for the monitoring and evaluation of investment projects. Unfortunately, there is as yet no evidence of improvements through these arrangements; further new instructions were promulgated in 2020 for the identification, feasibility-testing and decision making of investment projects which will generate a pipeline of the most promising investments, but no information is available about the implementation of investment projects during the period 2018-20. More generally progress in improving resource allocation is held back by the inadequate links between strategic plans and actual decisions. Moreover, the scope for initiatives is limited by the lack of fiscal space: a very high proportion of total expenditure continues to be devoted to civil and military pay, with most of those concerned being engaged on administrative functions rather than service delivery. At the same time the relatively low proportion of GDP collected in taxes limits the availability of resources to meet the costs of service improvements.

7. High scores on PFM Indicators do not necessarily show that resources are used efficiently for service delivery. This assessment shows that the focus is on ensuring that correct procedures are followed rather than on good performance in providing public services. Although there are ongoing efforts to improve internal and external audit, these activities have remained mainly focused on compliance with regulations. Increasing attention is now being given to the performance of systems and to financial reporting. The resources and procedures devoted to internal control through layers of supervision of each expenditure transaction remain very considerable, although there has been some rationalization of these activities. The very high proportion of total employment in the country accounted for by employment in government services (some 40 per cent of total employment as registered for social security purposes) already raises questions about the efficient use of resources by general government; the very low proportion of women in the labour force, despite the fact that girls reach higher standards in school than boys, provides further evidence that cultural factors may stand in the way of economic and social development. Although external audit has made progress since 2016 in developing financial and performance audit alongside its traditional emphasis on compliance control, it has not yet made much impact in identifying ways to deliver services more efficiently. Internal audit is beginning to look at the performance of control systems rather than just at the incidence of non-compliance with applicable rules, but again the main focus is not on improving the efficiency of service delivery. Controls over staff numbers and payroll work efficiently to prevent errors, but there is no career planning to ensure that people with the most useful abilities and experience are available to fill demanding senior posts.

8. Overall the picture is of continuing gradual improvement in PFM since 2016 despite a very unfavourable external economic environment, at least until the advent of the Covid 19 pandemic. Financial management information systems have continued to improve, as the coverage of GFMIS has been extended. An extended range of fiscal information is published promptly, although there is still scope for improvement, particularly in the reporting of public investment. The Income and Sales Tax Department has been substantially reorganized and strengthened, with new arrangements for considering appeals and resolving disputes. 75 per cent of tax filing now takes place on-line (as against 6 per cent in 2016). Tax audit is now risk-based, with specialized teams dealing with problem areas. The separate tax administrations in the special economic zones have been abolished. Measures have been taken to counter tax avoidance by misrepresenting the location of activities, and a start has been made in reducing unjustified tax exemptions. Tax arrears have been substantially reduced, and a compliance improvement campaign directed at professional groups was implemented towards the end of 2020.

9. There are good prospects for continuing improvements in PFM, supported by EU and USAID assistance. The Government’s undertakings to the IMF in the context of the EFF provide further confirmation of this, and the further fiscal consolidation which is part of this programme should eventually free up resources to be used for service improvement. An improvement in the situation in neighbouring countries would offer the prospect of a stronger economy in Jordan and reduced strains on the country’s infrastructure and public services, but for the time being this cannot be relied on. Meanwhile continuing efforts in accordance with the Government’s PFM reform programme will be needed to realise the improvements in public investment planning, to increase tax revenues, to make internal control less burdensome, and to reorient internal and external audit work to contribute more effectively to improving the efficiency of service delivery. But it has to be recognized that PFM structures and procedures which match all the PEFA criteria for measuring good practice will not of themselves ensure the delivery of good public services: this will also depend on decisions about the amounts to be raised through taxation, and the relative priorities given to the different activities of government. 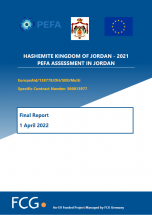