Performance changes since last assessment in 2015

Table 0.2: Changes in the ratings for directly comparable dimensions since 2015 assessment

Table 0.3: Comparison of PEFA scores by indicator (according to 2011 methodology)

Table 0.4: Comparison of PEFA scores by dimension (according to 2011 methodology)

Annex 4 provides a detailed analysis of changes in performance since the 2015 assessment according to the 2011 PEFA methodology. 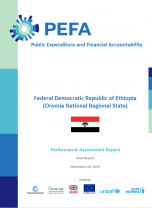