1. The purpose of this PEFA assessment is to provide an objective analysis of the present performance of the PFM system in the Municipality of Martvili against the PEFA indicators. This PEFA establishes a PEFA baseline using the 2016 PEFA methodology.

3. Overall, the results of the PEFA show that public financial management systems in the Municipality of Martvili are strong in terms of budget execution and control as the country’s PFM Reform Action Plan has been implemented.  There is weakness in terms of the aggregate expenditure side of the budget performing according to plan as information on grants, a major source of revenue, is lacking.  There is an impressive array of information regarding the finances of the municipality.  The budget documents include all of the basic information required to support a transparent budget process.

4. The main area of weakness is found with respect to progress towards a comprehensive medium-term expenditure framework based on a program budgeting for results approach.  There is a detailed budget calendar but its effectiveness in hindered by the timing of information on grants and the absence of internal municipality forecasts.  These aspects mean that budgetary units do not prepare their budgets with consideration of ceilings.  A medium-term approach is not taken to expenditure budgeting.  The budget is presented for the up-coming year only with no focus on determining medium-term expenditures aligned to even the basic of strategic plans and medium-term budgets.  Improvements can be achieved by rolling over expenditures into the medium-term to focus on ongoing policy.  However, this may be difficulty given the uncertainly of revenue planning which needs to be resolved first.  The legislature has adequate time to carry out its scrutiny function of the budget.

5. The municipality works in conjunction with the Georgian Treasury which, based on its cash inflows and outflows forecasts, deposits a part of its cash in commercial banks through daily auctions.  The consolidation of cash balances in a Treasury Single Account (TSA) and commercial banks is made on a daily basis and published on the Treasury website.   The municipality prepares cash flow forecast annually for the year to come by quarter. It is updated on the basis of actual inflows and outflows, particularly for supplementary budgets.  Budgetary units are able to plan and commit expenditure for one year in advance on the basis of adjusted quarterly ceilings, in accordance with the budgeted appropriations and commitment releases. Management of budget releases has been successful in controlling arrears.

6. The payroll system score is strong.  All government contracts are procured through Georgian EGovernment Procurement System.  Eighty-eight percent of the value of contracts is procured through competitive procurement methods.  All the key procurement information is made available to the public.  However, the appeals process is not wholly independent.  Internal controls on non-salary expenditure have strong segregation of duties, effective commitment controls and compliance with payment rules and procedures.  This achievement is ensured by the established Public Finance Management Information System (PFMIS). The internal audit function is strong and focuses on evaluations of the adequacy and effectiveness of internal controls.  Accounts reconciliation and financial data integrity are also areas of strengths.  Data integrity is good as access and changes to records is restricted and recorded, and results in a sufficient audit trail.  With respect to in-year budget reports, coverage and classification of data allows for direct comparison to the original budget. Information includes all budget estimates for the budgetary units.  Consolidated budget execution reports are prepared quarterly and issued to the Sakrebulo.  There are no material concerns regarding data accuracy.

7. The situation with respect to the annual financial reports is mixed.  The consolidated budget execution report for budgetary units is prepared annually and is comparable with the approved budget. The financial statements generally contain full information on revenue, expenditure, financial and tangible assets, liabilities, guarantees and  long-term obligations but just cover the Municipality Hall and are not consolidated with other spending units that operate under the municipality.  The annual budget execution reports and financial statements are not submitted for external audit but are submitted to the Mayor and the Sakrebulo.  The municipality applies the current national accounting standards to its financial statements.

8. While external audit standards are an area of significant strength, annual audit coverage is not mandatory.  The timing of audits should take place at least one every three years and is dependent on risk analysis and the State Audit Office’s work program, given its resources.  The audits highlighted relevant material issues and systemic and control risks.  Audit recommendations for the municipality are followed up and monitored by the executive.   Legislative scrutiny does not meet PEFA standards as it is not carried out by the Sakrebulo but is delegated to the State Parliament.  None of the audits of Martvili were addressed at any level.

10. An overriding feature of PFM in Georgia has been the development and good use of Information Technology in budget preparation, budget execution (accounts, commitment control, and cash management), personnel and payroll, revenue services, and procurement.  This use of IT is not only at the central government level but also at the municipality level as the systems are unified for the whole of the government sector.  This applies even to the smallest of municipalities such as Martvili.  The application of IT has been developed incountry based on business processes in each of the subject areas (redefined as necessary) and not on the reconfiguration of business practices to suit particular software.  This adoption of IT solutions combined with the internet as a vehicle for its implementation by competent and trained personnel (with appropriate control) has been fundamental to the development of strengths in PFM.  The integration of IT, internet and personnel enhanced skills through training, has resulted in PFM’s positive effectiveness and efficiency. Aggregate Fiscal Discipline

11. While strong revenue administration ensures that revenues are efficiently collected, aggregate fiscal discipline is impeded by the poor information on grants and their transfer during the year.  The planned budget is circumvented by numerous supplementary budgets.  Treasury operations and cash management enables expenditures to be managed within the available resources.  Control of contractual commitments is effective and has removed expenditure arrears.  The periodic and strong external audit function enhances fiscal discipline.  Internal audit is regular and effective.  Sakrebulo scrutiny could provide an effective prop to fiscal discipline, but it is lacking.

12. The Chart of Accounts caters to a multi-dimensional analysis of expenditure.  There is no medium-term perspective in expenditure budgeting linked to strategic plans.  Their absence impedes a strategic allocation of resources aligned to the municipality’s priorities.  Better management of investment would improve the strategic allocation of resources as it would ensure that recurrent cost implication of investment is better factored into the budget process and investments are also selected to generate the best return. Efficient Use of Resources for Service Delivery

13. The current weaknesses in competitive bidding in the procurement system with respect to the appeals and dispute process could have adverse implications for the efficiency in service delivery.  Nevertheless, the involvement of the State Procurement Agency in the “no objection” process is valuable for municipalities who may not have the internal expertise or independence.  The strengths in the accountability mechanisms make external audits effective as counter checks on inefficient use of resources, but this is limited by their infrequency.  However, weaknesses in the production of consolidated annual financial statements limit the impact of audits which in turn limits the effectiveness of oversight.  These are offset, however, by the strength of the annual budget execution reports.  This is limited, however, in terms of information on the initial specification and subsequent realization of annual targets for outputs and objectives.  The lack of the Sakrebulo’s involvement in external audit reports misses the opportunity for the municipality to formally scrutinize them.  The activities of the municipality’s internal audit unit also contribute to ensuring service delivery in this regard.

14. The status of PFM in the municipality can be attributed to strong management of the PFM reform program in Georgia at the central and municipality government levels (summarized in section 5).  Since 2007 impressive progress has been made at the Revenue Services; important reforms were implemented at the Treasury Service; and the Treasury Single Account was extended, which now includes local governments and all public entities.  Also, the web-based PFMIS was launched.  The State Audit Office has transformed from the traditional control-inspection function to the new function of modern financial and compliance audit in line with international best practice.  The legal and methodological basis for internal audit and control has been established and is being rolled out throughout the Government.  Since its establishment, the Academy of the Ministry of Finance has been developed into the key provider of training related to the PFM reforms and initiatives.  Ongoing reforms include new approaches in the instruments and practices of Parliamentary scrutiny of the PFM system.  The importance of independent fiscal institutions and the role of the Budget Office of the Parliament are also understood and remain in the agenda of PFM reform.1  However, scrutiny of audit reports on municipalities is confined to the Parliament rather than the municipality Sakrebulo, which is a weakness that the PEFA methodology has identified. 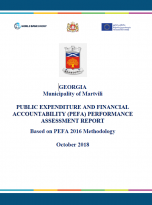