The purpose of this PEFA assessment is to provide an objective analysis on the present state of the Public Finance Management (PFM) system in the Republic of Botswana (the Government) against the revised PEFA methodology.  This is a repeat assessment for the Government.  The assessment will provide an update on the PFM progress since the last assessment conducted in 2013.  In addition, this assessment establishes a new baseline of information under the revised 2016 PEFA framework.

The data collection and interviews (fieldwork portion of the assessment) were conducted from January 24 – March 7, 2019.  The assessment team analyzed and prepared the preliminary version of the self-assessment from March 1 – April 21, 2019. MFED management and the PFM Reform Steering committee members reviewed the results and provided feedback from March 24 – May 17, 2019.  Peer reviewers reviewed and completed the quality assurance of the PEFA report from May 20 – June 11, 2019.  The financial years covered under the assessment were primarily 2015/16, 2016/17 and 2017/18.

The assessment looked at expenditures of central government (CG) entities, including budgetary units, extra-budgetary units, public enterprises and revenues collected by the Botswana Unified Revenue Services (BURS) as well as other revenue categories. CG budgetary units consists of ministries, departments and agencies (MDAs) whose budgets are approved by Parliament.  Extra-budgetary units, public enterprises and/or parastatals are covered to the extent of financial reporting and allocations from the Government. The local authorities, or subnational governments (SNGs), were only included in the assessment as referenced by indicator 7 (transfers to subnational governments) and indicator 10 (fiscal risk reporting – 10.2 monitoring of subnational governments).  Botswana Missions Abroad, Land Boards and Special fund accounts were not directly assessed but were factored in the CG overall operation of their parent entity.

The results of this PEFA assessment explains how Botswana’s PFM systems influences fiscal and budgetary outcomes.  The results are as follows:

The Government keeps a tight grip on annual spending in accordance with the provisions of its financial rules and regulations.  Most budget entities tend to operate within their allocated resources.  However, there are instances of overspending by MDAs.  This leads to budget adjustments via the supplementary budget request route or through the virement request process.

With the adoption of NDP 11, the Government proposed a comprehensive fiscal rule.  The main elements of the fiscal rule are:  financing recurrent budget from non-mineral revenues; splitting the spending of Mineral Revenues – with up to 60 percent invested in physical and human capital, while up to 40 percent is saved as financial assets for future generations; restricting total government expenditure to GDP at 30 percent; maintaining a 70:30 allocation between recurrent and development budgets; and maintaining the statutory debt-to-GDP limit of 40 percent; of which 20 percent is domestic debt, while the other 20 percent is foreign debt.  The Government has a strong fiscal policy objective which is to maintain a balanced budget and keep deficits to a minimum.

Medium-term projections play a critical role in depicting the future fiscal outlooks for governments.  However, there are concerns that the medium-term frameworks are not being used effectively to set parameters for the budget and to guide the Government in its decision-making process.  Furthermore, revenue forecasting constantly underperforms and is not reliable.  This could ultimately impede fiscal relevance and discipline.

SOEs performances are weak and rely a great deal on transfers from the Government to support some of their daily operations.  There are uncertainties surrounding the future return on investment with SOEs.   This leads to a growing fiscal concern of the Government that may impact future fiscal discipline.

The strategic allocation of resources is critical to government operations when policy priorities and objectives are aligned with budget resources.  The eleventh National Development Plan (NDP) was developed to represent the national plans and priorities of Botswana and its efforts leading towards the achievement of Vision 2036.  NDP 11 is based on the theme “Inclusive Growth for the Realisation of Sustainable Employment Creation and Poverty Eradication”.   Most MDAs have developed strategic plans centered around and in support of NDP 11.  The strategic plans are used as a guiding principle to efficient and effective service delivery.  However, the strategic plans have not been appropriately defined due to the absence of program association with service delivery strategies and performance outcomes.  There is no performance measurement information to track and there is no indication that cost analysis was conducted. In addition, there are no narratives in the annual budget documents to outline how the allocation of resources support service delivery units.

There was no evidence that indicated cost benefit analysis of service delivery was factored in the medium-term frameworks.  With the lack of cost analysis of services and the absence of key performance evaluations in budget documentations, the decision to allocate resources across MDAs and other entities is not based on substantiated information and cost justifications.  In addition, there are no indicative planning figures used in the budget preparation/development process.  The budget allocation to subnational governments is usually based on how much resources are available at the time of budget formulation.  This poses a threat to the medium-term outlook. Therefore, the link between the medium-term framework in expenditure budgeting, indicative planning mechanisms and MDAs strategic planning is fractured and not fully developed to support a strategic allocation of resources.

Adjustments to the annual budget, through supplementary and/or virement requests, are kept to a minimum.  However, there is limited evidence regarding whether budget resources are used efficiently when delivering services to the public.  There is insufficient qualitative and/or quantitative data collected to determine if services are delivered as planned and whether those services lead to value for money opportunities for the Government.  There is a lack of program evaluation and data on resources available at the service delivery units.  This lack of performance information undermines accountability for service delivery.

The absence of performance information, identified at the MDA level, hinders operational efficiency.  The Government is considering transitioning to a performance management or result-based environment that uses performance measurement information as the focal point during its annual planning and budget development process.  However, this initiative has been mentioned in future PFM reform plans.  No timelines for implementation have been identified. 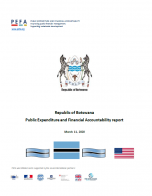