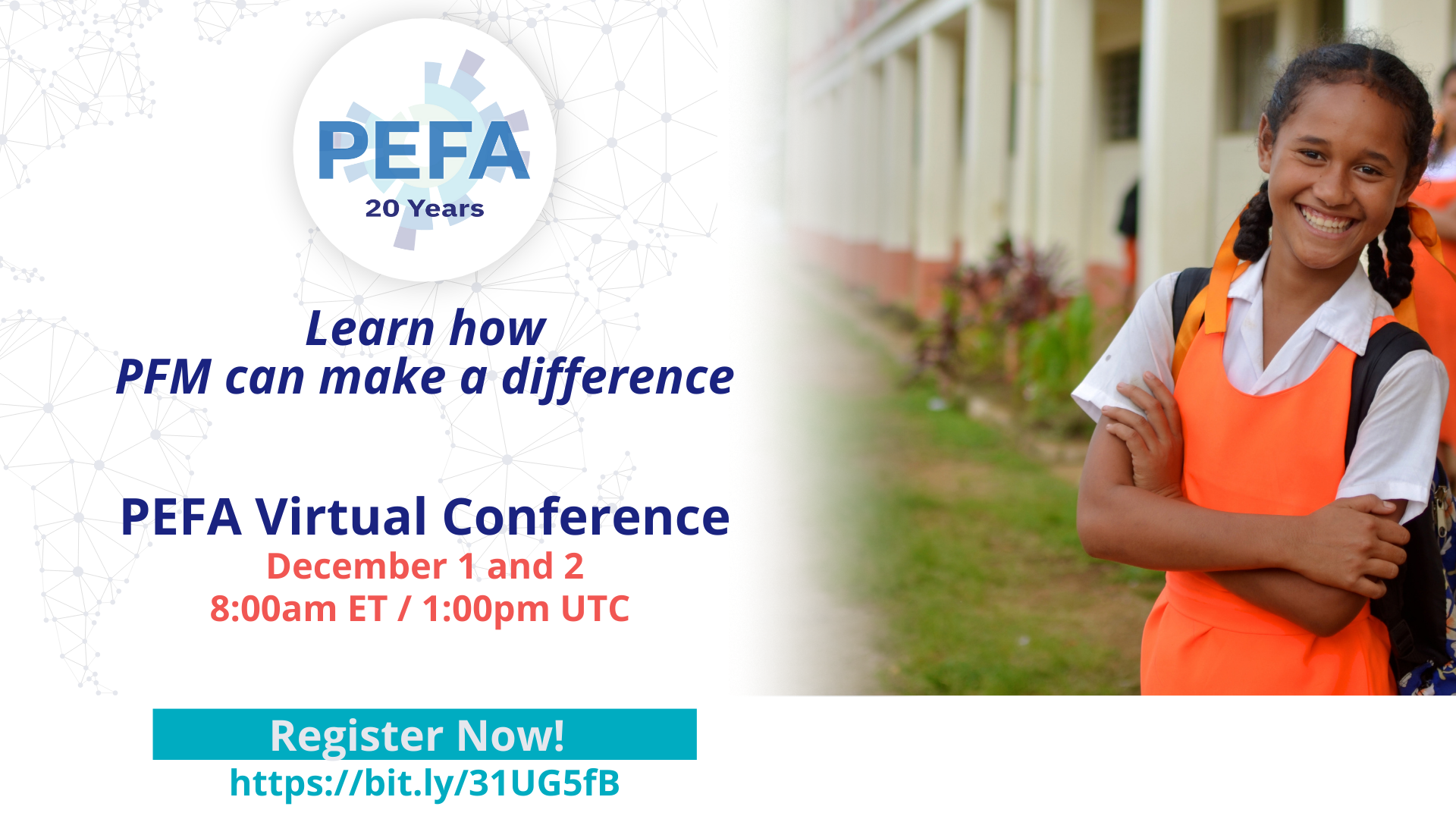 PEFA will mark the 20th anniversary of its program with a virtual conference on December 1 and 2, 2021. The event will be a celebration of PEFA’s journey and will include discussions on the role of Public Financial Management (PFM) in sustainable, green, and inclusive development. The registration is now open, and stay tuned for more details here.

Check out a recording of our special event on PEFA’s role on PFM reform improvements that took place in French on September 23, 2021, to celebrate PEFA’s anniversary.

One of the many ways PEFA contributes to strengthening PFM is through its Research Competition. This initiative aims to improve the evidence base for PFM, particularly through the analysis of PEFA data. Read the most recent publication "Analyzing the link between PFM System Strength and Public Investment Performance", and watch the replay of its launch event.

The third edition of the PEFA Research Competition was recently launched. It focuses on the impact of PFM on fiscal transparency and public accountability. The deadline to express interest is November 29!

Click here. for more information on how to apply.

Public Financial Management (PFM) matters for service delivery, as it can enable implementation of governments’ key policy objectives for better service delivery (SD), and implementation of the Sustainable Development Goals (SDGs). The paper "Strengthening the links between PFM and  Service Delivery in Sectors" discusses the key messages from the two Global Virtual Roundtables organized by the PEFA Secretariat on May 25 and 27, 2021.

The Catalan Government, Spain, conducted a PEFA self-assessment to help identify the main strengths and weaknesses of the Catalan budget system. The assessment provided a robust diagnosis that was helpful for the design of the forthcoming budget reform steps to be implemented during 2021-2024. Read more here.

On September 28, the PEFA and the MAPS (Methodology for Assessing Procurement System) Secretariats held their first joint webinar on how the tools can work together. Watch the replay of this event in English and French here.

PEFA organized a 4-day training program covering PEFA 2016 Framework and its subnational guidance and supplementary modules on gender and climate. The training was open to all to attend. With overall attendance of around 500 participants, four teams from the PEFA Secretariat delivered the training in 3 languages. Some highlights from the events here.

Follow us on Social media for future training and
PEFA 20 Anniversary Events: