The Public Expenditure and Financial Accountability (PEFA) program is launching a new supplementary framework for assessing gender responsive public financial management (GRPFM). The supplementary framework facilitates the collection of information to assess the extent to which countries’ public financial management (PFM) systems respond to differing needs of men and women, and subgroups within these categories. The framework has been tested in seven countries and is planned to be conducted on a voluntary basis as part of a regular PEFA assessment.

The PEFA gender responsive public financial management framework has been developed to help countries assess to what extent their PFM systems respond to differing needs of men and women and subgroups of these categories, e.g., youth, elderly, people with disabilities, etc., and promote and contribute to gender equality. GRPFM is relevant in countries where addressing gender inequalities is high on the political agenda and where gender equality policies are already in place.

The framework has nine indicators distributed across the budget cycle and can be applied at both national and subnational levels. 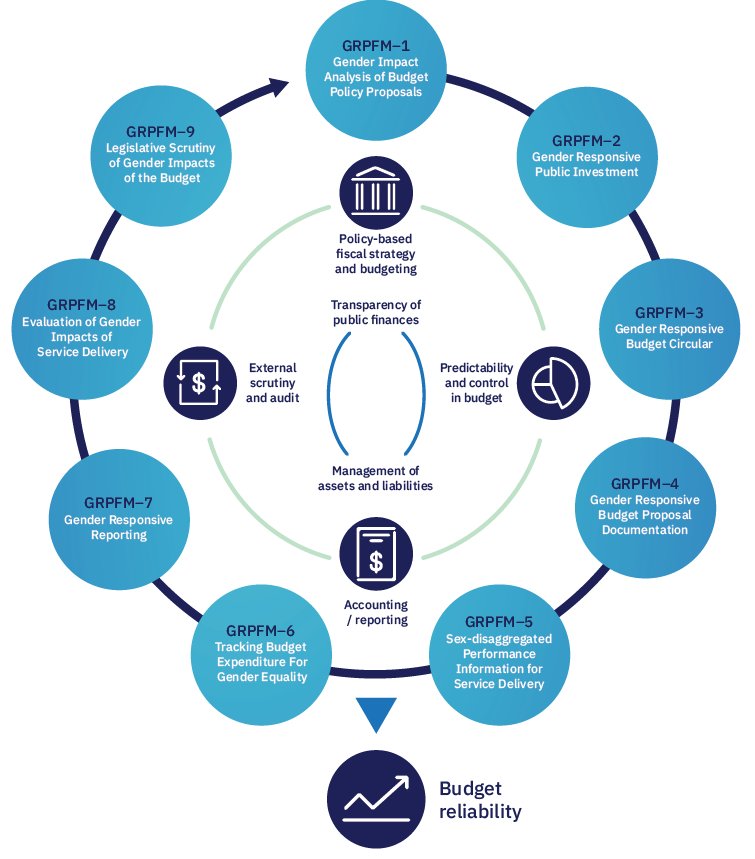 The GRPFM framework has been developed as a response to suggestions from groups and individuals involved in PFM and gender responsive budgeting (GRB) reforms during the public consultation of the update of the PEFA framework in 2016. These suggestions identified gender responsiveness as a major gap in existing PFM diagnostic tools that needs to be addressed.

The PEFA GRPFM framework builds on the work of other stakeholders involved in gender responsive PFM. In particular, UN Women has devoted significant resources to support gender equality and women’s rights through gender responsive budgeting.

The PEFA GRPFM framework also builds on the recent work of numerous individuals involved in GRB as well as that of institutions that have promoted its importance including, among others, the Organisation for Economic Development and Co-operation (OECD) and the Fiscal Affairs Department (FAD) of the International Monetary Fund (IMF).

Over the last 12 months the PEFA GRPFM framework was tested in seven countries: Antigua and Barbuda, Fiji, Haiti, Indonesia, St Lucia, Tonga, and Ukraine, and the lessons learned from the testing have been incorporated into the final GRPFM framework.

LESSONS FROM PILOTING IN INDONESIA

Learn more about how the PEFA gender responsive PFM framework was tested in Indonesia, in cooperation with the World Bank, and how the Government plans to use findings to further strengthen gender mainstreaming.

The PEFA gender responsive PFM supplementary assessment is intended to be conducted on an optional basis concurrently with a PEFA assessment and presented in an annex to the PEFA report.

While the PEFA GRPFM supplementary assessment can also be carried out as a stand-alone activity, it is preferable if this is done concurrently with a PEFA assessment to capitalize on data already collected during the PEFA assessment process and the marginal cost of the additional work required.

The framework document includes guidance for assessment teams on how to apply the framework.

The guidance introduces the framework and provides information on the definition and objectives of gender responsive PFM assessment. It provides an overview of the context and key trends in the application of GRPFM and presents detailed measurement guidance including clarifications and definitions for a set of key questions to assess a country’s performance in applying gender considerations to its PFM systems, processes, and institutions.

The guidance also includes country case studies highlighting examples of the use of gender responsive PFM in various countries and regions around the world.

The framework and guidance are currently being translated into French and Spanish and the translated versions will be available at the PEFA website in the forthcoming weeks.

WANT TO STAY IN TOUCH? 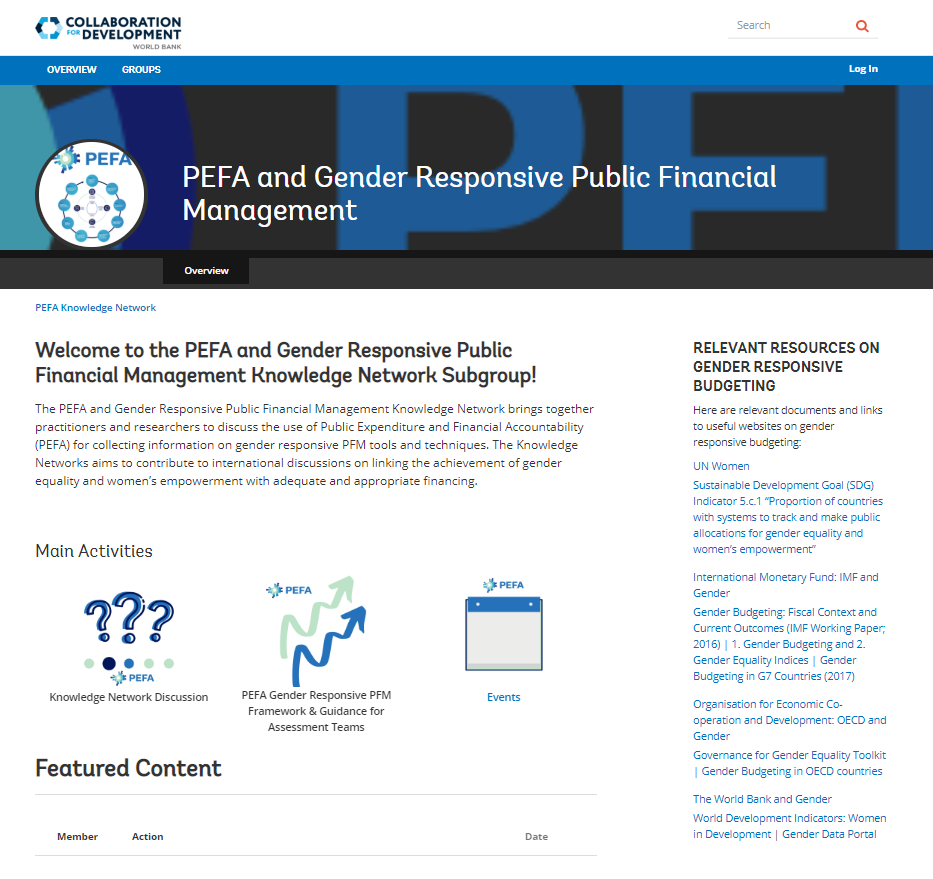 Gender responsive PFM or gender responsive budgeting (GRB), as it is often referred to, makes gender an integral part in fiscal and budgetary decision making and brings focus to the recognition that fiscal policies—both expenditures and revenues—have differentiated impacts and that analysis and review of fiscal policies and practices should take this into account.

Gender responsiveness is relevant throughout the budget cycle, including in the planning and design of budgetary policies that promote gender equality, the allocation of resources to implement them, the tracking of resources to ensure that adequate resources are allocated and policies are implemented as intended, and the monitoring and evaluation of the efficiency and effectiveness of policies, including their impacts evaluated or differentiated by gender.