Purpose, coverage, and management of the assessment

The Public Expenditure and Financial Accountability (PEFA) assessment aims to provide the government of Albania with an objective up-to-date diagnostic of the national public financial management (PFM) performance based on the latest PEFA methodology. The assessment establishes a new PEFA baseline using the 2016 PEFA methodology and provides an update on changes in performance since the 2011 assessment using the earlier methodology. The process cultivated a shared understanding of PFM performance and those dimensions that require improvement. The results are expected to assist the government in monitoring the implementation and updating of its 2014-2020 Public Financial Management Reform Strategy.

The stakeholders of the PEFA assessment are the national authorities and the main development partners involved in PFM in Albania. The assessment is a joint undertaking of the Government of Albania and the World Bank. The Ministry of Finance of Albania[1] led on behalf of the government side, and the World Bank led on behalf of the development partners. The existing council for supervision of implementation of the government’s PFM reform formed the core of the assessment oversight team.  This included representatives of the Ministry of Finance, Council of Ministers, General Tax Directorate, General Customs Directorate, Supreme Audit Institution, Public Procurement Agency, and Public Procurement Commission. The oversight team included representatives of the World Bank, IMF, European Commission, USAID, and the Swiss Secretariat for Economic Affairs.

The assessment covers the Central Government and reflects the PFM system status as of April 2017. The indicator ratings are based on 2014-2016 data.

The results of the assessment indicate mixed performance across the seven pillars of the 2016 PEFA framework, as illustrated by chart 1 above. Scores for 15 out of 31 indicators are in the A-B range reflecting strong performance while scores for the other 16 indicators are in the C-D range reflecting weak performance. Each pillar has its strengths and weaknesses, a brief summary of which is presented below with more detailed analysis provided in chapter 4. Scores by indicator and dimension are presented in table 1.1.

Budget credibility. The aggregate revenue and expenditure outturn is consistent with the approved budget in the period of the assessment. However, large variance in the functional composition of expenditures undermines the credibility of the budgetary process.

Fiscal transparency. The government scores well on several indicators under the fiscal transparency pillar, including budget classification, budget documentation and public access to fiscal information. However, gaps in information on revenues and expenditures of extrabudgetary units, resources received by service delivery units, as well as a lack of transparency in a significant part of the transfers to local governments present a concern.

Management of assets and liabilities is weak and in need of attention. Debt management stands alone as an area of strong performance under this pillar. Public investment management, in contrast, is a major challenge. Weaknesses in project selection, combined with incomplete data and poor monitoring systems undermine the effectiveness and efficiency of public investment management decisions. While the government maintains basic records of financial assets, there is no comprehensive record of non-financial assets. Monitoring and reporting of fiscal risks requires improvement.

Policy-based fiscal strategy and budgeting. The medium-term prospective is well embedded in the processes for macro-fiscal planning and budgeting. The technical aspects of the budget preparation process are well developed, however strategic focus of the budget is reduced by deviations from the existing calendar, weak links to the sector strategies and the Parliament’s limited focus on the Medium Term Budget Program (MTBP).

Predictability and control in budget execution. While there is solid improvement in several areas under this pillar, challenges remain. While the public procurement system has improved, non-competitive procedures still make up a significant proportion of contract awards. Work on modernizing IT systems and budget laws are positive developments but take time to be fully embedded in budget institutions, many of which still rely on manual systems and outdated procedures.  While the stock of historic expenditure arrears was largely cleared, it was not possible to fully prevent new arrears and MOF does not have a systemic reporting approach to monitor arrears through the Treasury system. Significant cash balances are held outside the treasury single account and not consolidated, thus reducing possibilities for cash management. There is also significant scope to improve the revenue collection systems. Revenue agencies are in the process of implementing a structured and systematic risk assessment process and the arrears collection function of the General Department of Tax (GDT) suffers serious weaknesses.

Accounting and reporting. Accounts reconciliation and the integrity of financial data are strengths within the PFM system but weaknesses in fiscal reporting remain. Both in-year and annual budget reporting could be improved by allowing users to compare the execution of the budget with the original budget allocation.

Assessment of the impact of PFM weaknesses

An effective PFM system is essential to implement public policies and to achieve strategic national objectives by supporting aggregate fiscal discipline, strategic allocation of resources and efficient service delivery. A brief summary of the impact of the identified PFM weaknesses at these three levels of budgetary outcomes is presented below.

At an aggregate level the government has met its fiscal targets but fiscal discipline is undermined through large variances in expenditure composition by function.  These relate principally to the clearance of historic arrears, the unanticipated costs of implementing large investment projects and, in 2015 the failure to reach revenue targets.   After revenue underperformance in 2015, improvements in revenue forecasting suggest that the government has better procedures in place for macroeconomic assumptions, and the evaluation of new policies.

Measures taken to strengthen commitment and expenditure controls were effective in clearing the stock of historic expenditure arrears but failure to fully prevent accumulation of new arrears presents a concern. Enhanced functionality of the Treasury information system provides comprehensive information on expenditure commitments and payments due. The use of such information is limited in the absence of standardized requirements for regular monitoring and reporting.

The government also remains vulnerable to fiscal shocks due to a failure to adequately monitor, report and manage fiscal risks such as the quasi-fiscal activities of public companies, public-private partnerships (PPPs) or other explicit contingent liabilities (such as, crop insurance, deposit insurance, disasters, ongoing litigation and pending court cases).

Budget allocations reflect medium-term policy objectives and priorities as formulated in the line ministry submissions for the MTBP. However, the strategic focus of the budget is hindered by the limited attention paid by the Parliament to the MTBP review. In addition, availability and quality of the sector strategies vary and the overly ambitious nature of some of the existing sector strategies makes them aspirational documents and diminishes possibilities for their operationalization through the budget.

Weaknesses in public investment management reduce its impact in supporting the government’s social and economic development objectives. Issues that require attention include the lack of overarching reviews of capital investment projects as well as monitoring and reporting.

3. Efficient use of resources for service delivery

The basic building blocks of the Albanian PFM framework are in place but require further to build capacity to focus on performance and the efficiency and effectiveness of service delivery. Public procurement practices are improving but high levels of direct contracting affect the efficiency of service delivery and the achievement of best value for money of government purchases.  Internal audit is still focused on compliance rather than addressing systemic or performance issues. Performance audits by the Supreme Audit Institution (SAI) are only just being introduced and these reports are not published or subject to broader discussion in society.  Of particular concern is management’s general lack of responsiveness to recommendations by the SAI and the legislature which may mean that opportunities to improve the efficiency of the use of resources are missed.

Change in performance since the last assessment

The main improvements were observed in the following areas:[1]

PI-3 - Aggregate revenue outturn compared to original approved budget: During the assessment period, revenue forecasting has been more realistic (with the exception of 2015).

PI-4 - Stock and monitoring of expenditure payment arrears: Greater emphasis on the management and reporting of commitments and expenditure arrears has resulted in an improvement in performance.

PI-19 - Competition, value for money and controls in procurement: There have been improvements in public access to complete, reliable, and timely procurement information.

Slippages in performance were noted in the following areas:

PI-8 - Transparency of inter-governmental fiscal transfers: Slippage due to an increase in the share of budget assigned to discretionary grants.

PI-11 - Orderliness and participation in the annual budget process: Slippage in performance due to issuance of budget ceilings after the budget circular in 2016 and late approval of the 2014 budget.

The impact of these performance movements on the budgetary outcomes can be summarized as follows:

Aggregate fiscal discipline was strengthened through improvements in revenue forecasting and monitoring of expenditure arrears.

Strategic allocation of resources was negatively affected by deviations from the approved MTBP calendar.

The impact of performance changes on efficient use of resources for service delivery was mixed. Positive impact resulted from improvements in various dimensions of transparency indicators, including budget documentation, public access to information and access to reliable and timely procurement information. Negative impact resulted from less comprehensive data collection for extra budgetary funds and deterioration in transparency of transfers allocated to local governments. Also, a lack of action in addressing weaknesses highlighted in audit reports may result in missed opportunities to make the most efficient use of resources within government.

Albanian authorities have made extensive efforts to implement PFM reforms through the current PFM Strategy. Initial efforts focused on laying the foundations for reform, creating institutional arrangements and drafting legislation. A monitoring and reporting framework for the implementation of PFM reforms is now fully operational. The implementation of an ambitious reform agenda is a challenge due to capacity constraints across the public.

Additional challenges may arise because of the organizational changes following the latest government restructuring initiated in the fall of 2017.

[1] The performance indicators (PI) listed refer to the PI numbering of the 2011 version of the PEFA framework. 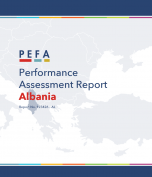