1. The objective of the Public Expenditure and Financial Accountability (PEFA) Assessments is to review the current performance of the public financial management (PFM) systems, processes, and institutions of the Federal Government of Ethiopia. The assessment is aimed at assisting the government in identifying PFM weaknesses that may inhibit effective delivery of services to its citizens and the realization of its development objectives in general. Furthermore, the findings of the PEFA assessment will assist the government in refining the PFM reform strategy that it has already developed and provide the basis for a coherent PFM reform program that can be supported by development partners (DPs) and through the government’s own initiatives.

2. The assessment covers the city of Addis Ababa, which is separate and independent from the federal government and qualifies as subnational government (SNG) in the PEFA methodology context. The assessment covered city government budgeted units, extra-budgetary units, the Office of Auditor General of the City Government, and the parliament. Civil society organizations were also contacted to solicit their views on the general PFM environment, especially on issues relating to procurement and taxation. The list of stakeholders met is presented in Annex 3B.

3. The fiscal years for the assessments are EC 2008, 2009, and 2010 (Gregorian Calendar FY2015/2016, 2016/2017, and 2017/2018). The period covered for each of the 94 dimensions (summarized into 31 performance indicators [PIs]) depends on the dimension in accordance with the PEFA measurement framework. Some dimensions were assessed at the time of assessment (December 2018 and February 2019) during the first and second field missions, respectively. Other dimensions were assessed at the relevant period, which is the last completed fiscal year FY2017/2018, or FY2018/2019 for the last budget submitted to the parliament.

4. The assessment management framework, oversight, and quality assurance are summarized in Box 1.1. The assessment was funded by the World Bank, Irish Aid, U.K. Department for International Development (DFID), European Union (EU), United Nations Children’s Fund (UNICEF), and United Nations Entity for Gender Equality and the Empowerment of Women (UN Women). It was managed by the World Bank.

5. Aggregate expenditure and revenue outturn for the three years under review were below budget (PI-1 to PI-3). Both functional and economic resource allocation are weak (PI-2). While by function, this is mainly due to salary expenditures and vehicle purchases that were not included in the original budget, with the economic classification, the originally budgeted resources appear to be reassigned to other sectors not within the original government priorities. Such reallocations are not in line with the original budget and indicate that there are gaps in the budget planning process and/or in the control of the budget execution process. In any case, this negatively affects efficient fiscal discipline and service delivery. Contingency expenditure is 7 percent on average over the three years, which is way above the average of 3 percent considered as good practice.

6. Variation in the budget composition indicates inability to spend the budget according to plan (the originally approved budget). The same pattern is true for revenue as well, with low tax collection and outturn below target. In addition, there are concerns with the high level of the stock of expenditure arrears and the annual frequency of reconciliation of expenditure arrears.

7. The fiscal discipline is nonetheless limited by the lack of monitoring of fiscal risk (PI-10). There is no debt and no need to develop a debt management strategy.

8. The total amount of revenue arrears is relatively limited (PI-19), and internal controls of budget execution (PI-23 to PI-25) are well functioning, even though best practices of risk-based internal audit are not being used. The procurement domain (PI-24) performs poorly. All in all, the performance in these indicators fairly contributes to the attainment of aggregate fiscal discipline.

9. The five indicators concerned with policy-based fiscal strategy and budgeting (PI-14 to PI-18) did not receive good overall ratings, which demonstrates that the process to allocate budgetary resources is not in accordance with city government strategic objectives or, alternatively, that development strategies are not well articulated.

10. The multiyear focus in fiscal planning is only annual. Consequently, the new indicators that relate to this budgetary outcome, such as macroeconomic and fiscal forecasting (PI-14) and fiscal strategy (PI-15), score low because the medium-term economic forecasts prepared for informing the budget planning processes are not considered reliable. The city government does not prepare a fiscal strategy to set a framework against which fiscal impact can be assessed.

11. Other indicators that contribute to the strategic allocation of resources function relatively better though still with certain weaknesses, notably, the comprehensiveness of budget documentation and its classification in accordance with international standards. The indicators related to revenue collection (PI-19 and PI-20) are also performing relatively well with the exception that there is no monthly assessment of arrears in the revenue collections and the risk-based approach on revenue risk management is still underdeveloped. Moreover, public investment management (PI-11) does not sufficiently reflect generally accepted good practice of public consultation. Although there is economic analysis and costing of project investment, the selection of investment to a high extent is based on political considerations. Such practice biases the distribution of public funds in favor of the perceived social and economic goals.

12. In this respect, the PFM system in the Addis Ababa City does not work particularly well. This is demonstrated by the low score for the processes that plan services in public investment management (PI-11) and in medium-term expenditure budgeting (PI-16), as well as a budget preparation process (PI-17) that provides ceilings for budget estimates to the budget entities that have not been preapproved by the cabinet. Though the system of allocating transfers (PI-7) is good and determined by a transparent and rule-based system, there are delays in the actual transfer of funds.

13. As a result, the rating related to the specific service delivery performance indicator (PI-8), which can demonstrate the efficiency with which services are delivered, is not performing well. The same applies to public asset management (PI-12), which does not allow enough transparency on what is effectively maintained by the Addis Ababa city government.

14. Nevertheless, the mechanisms in place to reduce possible leakages in the system, such as internal control and audit (PI-25 and PI-26) are generally good in spite of the absence of payroll audits. Financial data integrity demonstrates good accounting controls (PI-27). However, the public procurement function is still undeveloped and not transparent enough (PI-24).

15. Last, oversight arrangements for external audit and legislative scrutiny of audit reports (PI-30 and PI-31) are still not considered effective. There is low coverage of external audit, poor response to audit recommendations, and insufficient independence of the external audit function. The penalizing feature in the process of legislative scrutiny of the annual audit report is the lack of transparency (PI-31.4) that undermines the accountability role of the oversight function.

Performance changes since the last assessment

16. On the basis of the 2011 method, between the 2015 and the 2018 assessments, almost equal PIs deteriorated (7) when compared to improved in performance (6) as shown in Table 0.1. The majority of indicators (14) or 50 percent have remained unvaried and 2 are not comparable. Annex 4 gives the details of performance change.

17. As there is no change in the performance between 2015 and 2018 for most of the indicators, and the number of areas of improved performance is nearly the same as the areas of deterioration, the overall performance of the PFM system has fundamentally remained unchanged.

18. Aggregate fiscal discipline remains generally the same because there is no improvement in the overall budget credibility and budget execution processes with the exception of (a) increment of actual expenditure charged to the contingency vote in 2018, (b) budget documentation covering more information, (c) deteriorated performance in providing ceilings to budget entities that have been approved by the cabinet, (d) suspension of payroll audits since 2015, (e) improved rate of management response to internal audit, and (f) improved quality of the in-year budget reports allowing direct comparison to the original budget.

19. The strategic allocation of resources has not significantly improved because it did not benefit from the deployment of strategic multiyear programming tools as well as macro-budget forecasts in the previous assessment, which is a new area of assessment in the 2016 PEFA framework. The observable changes identified are (a) transparency improvement in the rules of horizontal allocation of transfers, (b) deterioration in performance in the effectiveness in collection of tax payments due to increased revenue, and (c) improved frequency of revenue collection with daily transfers from the Central Bank of Ethiopia.

20. The performance of public services is not better managed, monitored, and controlled than during the previous assessment.

21. The city government’s PFM reform is largely dependent on the federal government’s overall reform strategy. It, therefore, cannot initiate its own PFM reforms. Presently, there is no major ongoing PFM reform initiative at the city administration level, except for (a) taking part in Integrated Financial Management Information System (IFMIS) training with World Bank support, in preparation for the rollout of IFMIS to all city and regional administrations and (b) training to city administrators on program-based budgeting (PBB), as the federal government has started the piloting and implementation of PBB. 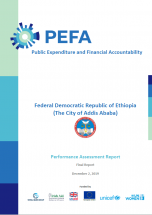