The purpose of Volume III of the PEFA Handbook is to provide PEFA users with expanded guidance on how to prepare a PEFA 2016 report following the public release of the Framework document on February 1, 2016.

The Package of documents for Public consultation include Revised Volume III of the PEFA Handbook on how to prepare a PEFA report, Enhanced PEFA report format  and excel scores worksheets for assessments using PEFA 2016 Methodology, as well as an Excel Scores worksheet for assessments using previous versions of PEFA Methodology for comparison over time.

In the Excel Scores Worksheet for assessments using PEFA 2016,  the assessment team leader needs to enter the score of each dimension (tab “Input…”) and to “Refresh all” under “Data”. Based on this single entry.

The aggregated score of each indicator will be automatically determined and respect the aggregation method (M1 or M2).

The summary table of scores to be inserted in the Executive summary will be populated.

Pre-formatted charts will be generated for different sections of the PEFA report.

The Excel Scores worksheet for assessments using previous versions of PEFA  are used in the exact same way, as explained for PEFA 2016,  but allows for comparison over time when a previous version of the PEFA Framework must be used.

For Sub-national governments applying the PEFA 2021 the approach is similar and the task team leader should use the template for the 2021 SNG Methodology.

For the teams applying the PEFA Gender Responsive PFM Framework and the PEFA Climate Responsive Framework similar excel scores worksheets are available, that are used in a similar way: 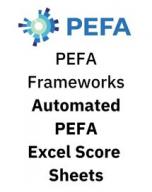