The purpose of Volume III of the PEFA Handbook is to provide PEFA users with expanded guidance on how to prepare a PEFA 2016 report following the public release of the Framework document on February 1, 2016.

The Package of documents for Public consultation that can be downloaded are listed below:

1. Revised Volume III of the PEFA Handbook on how to prepare a PEFA report

The assessment team leader needs to enter the score of each dimension (tab “Input…”) and to “Refresh all” under “Data”. Based on this single entry:

4. An Excel worksheet for assessments using previous versions of PEFA

This worksheet works in the exact same way as explained for PEFA 2016 but allows for comparison over time when a previous version of the PEFA Framework must be used.

5. A template for a short note to present the results of the PEFA assessment

The template builds on some of the pre-formatted visuals that have been defined. 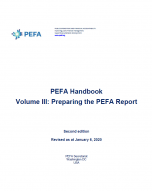