This report reviewed 67 applications of PEFA in 60 countries that were received by the PEFA Secretariat up to the end of March 2007. The lessons learned from this review did not differ substantially from the conclusions of the 2006 monitoring report.

Compliance with PEFA guidance improved from an average of 48 percent for reports up to March 2007 to 60 percent for the following year. The overall quality of assessments was identified as depending on support from all major stakeholders, suitable timing and scheduling, a well composed team of qualified assessors, sufficient time to obtain evidence, and well-defined quality assurance mechanisms 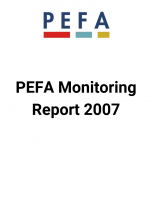