PEFA Monitoring Report 2006: Observations from the Early Application of PEFA

This report analyzes the experience of PEFA based assessments completed from June 2005 to March 2006 and identifies lessons learned from the application of PEFA during the first year following its launch.

The report investigated where and how the PEFA Framework had been adopted, the extent of compliance with the guidance and factors that influenced the degree of compliance with the Framework. It also provided some examples of good practice in managing assessments and undertaking the assessment work. The report offers recommendations on how the quality of future PEFA based assessments may be further strengthened in order for the assessments to play a key role in achieving the objectives of the strengthened approach to supporting PFM Reforms.

The report noted that around 40 percent of applications were in sub-Saharan Africa and others more evenly distributed across other regions. All but one were led by development partners. Most were combined with other analytical work. The main lessons identified were that government participation was crucial to the quality of the assessment and use of the results, managing expectations was important to avoid unrealistic views on scores, resources required for assessments was often underestimated, and well managed quality assurance processes were crucial. 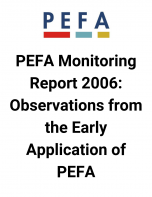