Public financial management (PFM) arrangements at the subnational level are likely to depend on arrangements determined by the central government in national legislation or national constitution. PFM arrangements can vary considerably by country. Variations reflect differences in, among other things, population and geographic size, governance, functions and responsibilities, administrative traditions, and the degree of operational discretion.

It provides additional guidance for applying the PEFA methodology at the subnational level. To this end, it offers recommendations on how each of the PEFA indicators and dimensions can be applied or modified to better suit the characteristics of the subnational governments. It introduces some new indicators and a new pillar on the intergovernmental fiscal relations which consists of two indicators, including: HLG 1: Transfers from higher levels of government; and HLG 2: Fiscal rules and monitoring of fiscal position.

Part 1 and 2 of the guidance present the general features and the methodology of the PEFA framework, which are similar to the use of PEFA at national level.

Part 3 focuses on indicators, including how the standard PEFA 2016 indicators may be applied or modified, if necessary, to accommodate differences at the subnational level (see subsection 3.2 for the full set of indicators).

As detailed in part 4, the PEFA report format described in the PEFA Framework document requires some adjustment when applied at the subnational level.

Part 5 describes the particularities of the PEFA process for subnational governments, in particular for a set of assessments, i.e. when a number of SNG at the same level or different levels is assessed in the same country during the same period of time. 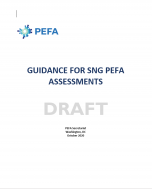