Guidance for SNG PEFA Assessments: How to get Full Overview of the PFM Performance at SNG Level /Piloting Phase - Feedback Appreciated/

The revised guidance on SNG assessments introduces a flexible approach to PEFA assessments, in particular by excluding from the assessment indicators for PFM aspects where the SNG(s) being assessed do not have autonomy but where CG sets rules and or implements.  However, if the purpose is to inform reform actions also at CG level, all the dimensions of the PEFA framework will have to be used, meaning that all functions of PFM are assessed no matter whether they are performed by CG or SNG. It also means that, in addition to the evidence for scoring, the report provides additional information on the ways the regulations and tools (e.g., IFMIS, financial report templates) provided by CG have an influence on SNG performance.

Aiming at determining the influence of the central government on the subnational PFM performance, the approach in this guidance provides:

This approach, introduced as an add-on to the PEFA Guidance for SNGs, is intended to be conducted on an optional basis concurrently with a PEFA assessment and will be part of the PEFA report. Its findings will be summarized in a consolidated report. It cannot be carried out as a stand-alone activity.

The decision to carry out this approach would require prior agreement between the subnational government(s), the central government, and any development partners involved. A joint planning of PEFA assessments at the different tiers of government would be an essential first step to improve the understanding of linkages amongst tiers from the start of the assessment. 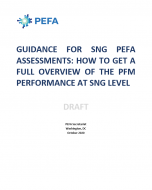