The AgilePEFA approach was developed as a simplified and agile alternative assessment process that could became an option for the application of the PEFA methodology under certain circumstances. In setting out to develop such agile approach, the Secretariat reviewed existing processes, reporting and guidance to identify potential efficiencies in the time and resources required to undertake an assessment and prepare a PEFA report, while at the same time maintaining the integrity of the existing PEFA methodology, including indicator set, calibration and scoring.

AgilePEFA includes a streamlined ‘ten-step’ timeframe for conducting PEFA assessments, a simplified Concept Note, a revised data collection template (and collation of key data prior to the field work) and a simplified, evidence-based, PEFA report template.  AgilePEFA does not involve changes to the current PEFA 2016 framework, methodology, indicators, calibration or scoring but rather focuses on streamlining planning and preparation, data collection, report writing and approval.

A recent application of the approach in Tonga, the Tonga AgilePEFA pilot, demonstrated that it is possible, in the right circumstances, to undertake an AgilePEFA assessment, while still applying a comprehensive, high quality analysis of PFM performance with the PEFA 2016 methodology. However, further pilot testing is required to see whether this experience can be replicated in different country circumstances and identify the circumstances that would benefit from its application.  Therefore, at this time, AgilePEFA is not intended to fully replace the standard PEFA approach, but rather to be used as an alternative that looks for efficiencies in time and resources for countries in certain circumstances.  The PEFA Secretariat welcomes expressions of interest from countries wishing to apply this approach.  Lessons learned from pilot testing will be used to update the process and guidance.

In the meantime, we would be interested in receiving feedback, comments and suggested improvements on the current draft AgilePEFA guidance and report template from the PEFA community and PFM specialists.

Please send your comments to services@pefa.org by no later than September 30, 2020. 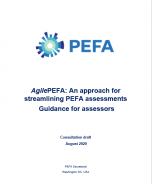