The objective of the 2015 PEFA assessment is to provide the Government of Ukraine with an up-todate diagnostic of public financial management performance based on internationally recognized PEFA methodology and taken into account recent upgrade of the PEFA methodology. The PEFA Assessment is carried out jointly by a group of partners - USAID, EU, GIZ, and the World Bank. The joint assessment should help streamline policy dialogue and align messages to the Government across development partners.

The period since the 2011 PEFA assessment was marked by persistent macro-economic crisis, civil unrest of 2013-2014 and conflict in the East of Ukraine. In the face of substantial fiscal pressures, fiscal management was dominated by short term consolidation needs. While the government succeeded in maintaining fiscal discipline, short term crisis management has crowded out more long term institutional reforms to strengthen public financial management.

The PFM system in Ukraine hampers efficient service delivery. The budget process does not have a strong policy or strategic focus. There is no medium-term fiscal strategy to guide the budget process.

The Government has managed to contain the fiscal deficit during recent crises. But this has come at the cost of budget predictability as expenditures have been cut through extensive reallocations during budget execution. Performance information is included in program budgets but tends to focus on outputs rather than outcomes and results. Weak links between sector plans and budget allocations and weaknesses in public investment management both at selection and implementation stages are not conducive to efficient targeting of resources to strategic policy priorities.

Ukraine’s PFM system is control oriented and rigid. The control environment is burdensome and obliges those responsible for the delivery of public services to focus their efforts on compliance rather than improving performance and the effectiveness of service delivery. Cash rationing practices have helped curtail the deficit during the fiscal crisis, but will add further rigidity budget system once the fiscal situation normalizes. Ongoing efforts to improve internal audit and external audit and focus on performance auditing are only likely to have an impact on the performance orientation of the PFM system over the longer-term.

In terms of performance change, the Ukrainian PFM system was characterized in the 2011 PEFA as highly centralized with a focus on input controls. The structure of controls was found to be heavy and not conducive to improvements in resource allocation and operational efficiency. This did not change.

Since 2011 notable progress has been made with the adoption of amendments to the Tax Code changes related to data disclosure and transfer pricing controls, amendments to the Budget Code established a multi-year budgeting framework, revamped intergovernmental transfers, and changes to procurement law allowed for implementation of e-procurement and reduced number of exemptions. There was also notable progress on budget transparency. However, in several important areas, such as medium term budgeting and internal control, implementation of the new legal provisions has been slow.

The Government embarked on reforms to address poor governance after it took office in March 2014. PFM is a key component of many of the needed changes: transparency and efficiency of public expenditure allocations, strengthening external oversight of public funds are essential pre-requisites of improved accountability and public service delivery. However, the National PFM Strategy and Action Plan focuses on legislative initiatives and less on implementation. The Strategy does not provide a framework that can guide and monitor PFM reform going forward. Progress in implementation will require improvements in the mobilization of human resources, purchase of equipment and information systems, regulatory and administrative provisions, and institutional coordination mechanisms. 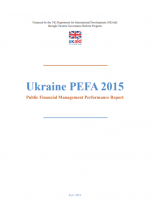