The purpose of the gender-responsive PFM (hereinafter – GRPFM) assessment is to gather information on the budgeting and reporting systems of the Vinnytsia City Council in order to assess the extent to which public financial management responds to the needs of gender (male and female) and other vulnerable groups in the city.

The fieldwork was carried out at the same time the main PEFA assessment was conducted; in order to maximise the use of time and also reduce the level of interaction with government staff due to their busy schedule. Furthermore, some of the information gathered during the main PEFA assessment was used to assess the GRPFM; additional data were also gathered where necessary.

The Ministry of Finance is the lead central government in gender-responsive budgeting (GRB) introduction in the budget process. Other stakeholders at the national level are all line ministries including the Ministry of Social Policy, Ministry of Education, Ministry of Healthcare, and Ministry of Youth and Sports. Initiatives aimed at GRB implementation and gender equality strengthening in Ukraine are supported actively by Swiss SECO, UN Women, European Union, and the World Bank.

When it comes to the regional and local level sub-national governments and budget institutions, they provide public services that are beneficiaries and implementors of the GRB reform.

The central government of Ukraine is advanced in terms of the promulgation and development of gender equality laws, regulations, and procedures/processes. These laws and procedures are equally applicable at the local government level. That said, local governments including the City Government of Vinnytsia have not mainstreamed these procedures and processes into the entire budget cycle. Table A-5.1 below provides a list of legislative instruments and policies adopted by the central government, applicable at the sub-national levels but yet to be actualised. At the City Government level, it appears that there is less political will as well as inadequate technical capacity for gender-responsive budgeting and reporting.

At this stage, the City Government does not analyse proposed changes in expenditure and revenue policies with information on gender impacts (GRPFM-1 rated ‘D’); this does compare with the rating of the main PEFA assessment with regards to the analysis of the fiscal impact of policy proposals (PI-14.2 rated ‘D’).

The City Government’s public investment management system has no gender-responsive analysis to determine its impact (GRPFM-2 rated ‘D’), even though economic analysis of investment projects is to some extent conducted prior to selection and funding (PI-11.1 rated ‘C’).

The City Government’s budget circular issued by the City Finance Department contains information on gender; it requires KSUs to consider gender during budget formulation and preparation and develop gender-responsive (sex-disaggregated) performance indicators of the budget programs (GRPFM-3 rated ‘B’); however, KSUs are yet to actualise this requirement. The main PEFA score related to GRPFM-3 is PI-17 which has an overall score of ‘D+.’

Budget proposal documentation submitted to the City Council contains no specific policy priorities that promote gender equality (GRPFM-4 rated ‘D’); the absence of this information means that the public has no crucial data on measures to ensure gender equality. There is, however, good dissemination (publication on the website) of key fiscal information to the public (PI-9 rated ‘A’); therefore, policy proposals and priorities on gender equality, if available, are likely to be published due to the transparency and accountability framework already in existence.

The Social Policy Department, the Education Department, and the Physical Training and Sports Committee evaluated the efficiency and effectiveness of service delivery according to the gender approach. The evaluation provides information on the performance of their programmes (GRPFM-8 rated ‘C’). This relatively compares with the main PEFA score of PI-8.4, rated ‘B.’

The City Council’s scrutiny of the budget is limited to information contained in the budget documentation; therefore, if there is no information on gender-responsive budgeting, gender equality, sex-disaggregated data, just to mention a few, the Council could only review what it receives. Currently, the City Council does not review the gender impact of budget proposals (GRPFM-9 rated ‘D’). The rating for PI-18 is ‘B+,’ considerably higher than the gender score because of the absence of gender information in the budget proposal documentation.

Vinnytsia City Government considers cooperation with the Ministry of Finance as a prerequisite for going forward to strengthening GRPFM – to make sure that introducing GRB in the budget process becomes legally binding. It requires amendments to the Budget Code of Ukraine.

Furthermore, the Finance Department in cooperation with sectoral policy departments intends to identify gender-sensitive budget programs, since it would be wasteful and inappropriate to establish gender dimension in all of them.

From the City Council’s side, all the instructions and directives developed at the national level are considered in the budget process.

There are nine (9) PEFA gender-responsive PFM indicators in the Supplementary Framework for Assessing Gender-responsive Public Financial Management. These nine indicators were designed to assess the processes and systems across the government’s budget cycle for the promotion and empowerment of women’s rights. Table A-5.2 in the reports summarises the performance of GRPFM at the Vinnytsia City Council, with a more detailed analysis and explanations of scores in the following sections. 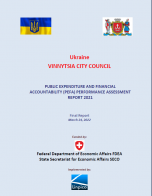