Ukraine’s macroeconomic growth remained on track from 2016 following the 2014-2015 economic crisis, partly due to the first IMF’s Stand-By Arrangement (SBA) approved in December 2018 and the second 18-month COVID-19 related SBA request of USD5 billion approved in June 2020, coupled with sound fiscal and monetary policies that culminated in the reduction of public debt. The country was not speared by the global COVID-19 pandemic; the humanitarian and economic crisis have derailed efforts geared towards stronger and all-inclusive growth.

Several years ago, Ukraine adopted a very bold and elaborate decentralisation agenda which became a top reform priority of the Government. The reform included a shift of fiscal responsibilities to local governments to be followed by decentralisation of the delivery of key public services such as education, health and social welfare. As decentralisation gains momentum, sub-national government levels are taking up increasing share of overall public expenditure.

This PEFA assessment in selected cities (including Lviv City) is part of a preparatory phase of the "Effective Local Public Financial Management in Ukraine" project (ELocFin), which is planned to be implemented between 2022-2025 with the financial support of the Swiss State Secretariat for Economic Affairs (SECO).

The SNG PEFA assessment covered local government budgeted units (specifically Finance Office, Education and Health, Urban Development, and Infrastructure), extra-budgetary units, municipal (public) corporations/enterprises, the Accounting Chamber of Ukraine,5 the State Audit Service, local branch office of State Fiscal Service and the City Council (legislature). The FYs for the assessment are 2018, 2019, and 2020. The last budget submitted to the city council is that of FY2021.

(i) Contribute to an up‐to‐date picture of the quality of sub‐national PFM system at OC level in Ukraine;

Based on this information, the local governments would be in a stronger position to prepare a list of PFM improvement proposals for submission to the Ministry of Finance (the proposals may include amendments to the budgetary legislation or additional reform initiatives/measures to the PFM Strategy and/or its Action Plan). The assessment results will be used for identification of the PFM strengths and weaknesses in the respective city, and as a result, for determining of the underlying causes of PFM performance. On the other hand, as the Ministry of Finance is directly involved in this PEFA assessment, as both a member of the Oversight Committee and as a peer reviewer; hence, the results can be directly used by the MoF for further adjustments (if necessary) in PFM or in decentralisation reforms.

The specific objective of this PEFA assessment is to improve public service delivery through supporting PFM reforms at the sub-national level (OC level) in line with Swiss SECO’s ELocFin project. Following an evidence-based approach, in this preparatory stage, the strengths and weaknesses of PFM in the pre-selected OCs will be assessed using the PEFA 2016 methodology, including gender and service delivery modules. On one hand, the ensuing assessment reports will provide the basis for the final selection of participating OCs as well as for the development of individual reform action plans (including baselines) during the inception stage of the first project phase. On the other hand, they will contribute to an increasingly granular understanding of PFM in Ukraine, which is the basis for the dialogue on PFM reform strategies and priorities both among local stakeholders and with international development partners.

The primary beneficiaries of this PEFA assessment are the Ministry of Finance of Ukraine and the Lviv City SNG. Key officials involved in the assessment were trained on the use of the PEFA methodology, Gender-responsive PFM, and the Service Delivery Module as part of internal capacity building in order to facilitate the assessment and communication of results.

Compliance levels are high with respect to adherence to financial management laws and procedures. Additionally, PFM laws, regulations and guidelines established by the state government and applicable at all levels of government are adequate, which is a notable strength.

Citizen engagement during the budget formulation and preparation process and the design of service delivery programs through public consultation strengthens transparency and accountability; this could be further improved if the same mechanism is adopted for public investment projects.

A good approach has been noted to improve the transparency and accountability through the publication of fiscal data (budget, execution reports, procurement information, performance information for service delivery, etc.).

Cash management is strong, aided by a good TSA architecture, in addition to a good revenue reporting mechanism, leading to adequate resources made available for payment of expenditure, thereby eliminating expenditure arrears.

The City Government also uses the state E-procurement portal – Prozorro. As a result, there is good public access to all procurement information in a timely manner. Transparent procurement systems contribute to reducing service delivery cost, thereby leading to efficiency and effectiveness of resource allocation.

The poor performance of transfers from higher levels of government has negatively affected the expenditure budget according to economic and functional classifications. It has also led to significant and frequent in-year budget adjustments, which could negatively affect the delivery of planned service delivery programs, and to minimise this effect, the state and City Government agree on predetermined services to be funded.

External audit coverage is partial, below 50% by value of city government operations, failing to provide a comprehensive independent overview of the operations of the City Government, mainly due to the legal limitations in ACU’s oversight responsibilities which undermines its independence. The City Council (local parliament) also does not scrutinise external audit reports because these audit reports are not prepared and submitted to the Council for review.

The revenue budget is less reliable but not to the extent of weakening fiscal discipline. Aggregate expenditures are reliable. Nevertheless, expenditure deviations according to economic and functional classifications due to high deviations in transfers from higher levels of government have weakened the fiscal discipline. The effects of these deviations have been minimized by the existing mechanism, which ensures that programs and services to be funded are predetermined prior to actual funds transfer, and therefore funds cannot be misallocated. Less than 3% by value of City Government operations are outside its budget and financial reports, thereby posing less threat to fiscal discipline. Payroll management and controls are good with very little or no negative impact on fiscal discipline.

The City Government has a considerable overview of the operations of municipal enterprises to the extent that at least 75% by value of municipal enterprises are audited annually with their audit reports published; monitoring and controlling the fiscal risk position of public enterprises strengthens fiscal discipline. Standard guidelines for public investment management are non-existent; this negatively affects the selection and economic analysis of public investment project to the extent that less economically viable projects may be implemented thereby weakening fiscal discipline. Fiscal discipline is weakened by the deficiencies in the oversight responsibilities of Accounting Chamber of Ukraine and the Lviv City Council.

The City Government’s revenue collection and accounting systems are strong. There is also an efficient cash management framework, which ensures that cash is available for payment of expenditure in a timely manner – this is a strength to strategic resource allocation. That said, strategic resource allocation has been weakened by the poor implementation of the budget classification; currently administrative budget classification is not used in the budget execution reports. Again, the budget documentation is not comprehensive as it fails to meet good international practice. Strategic resource allocation is also weakened by the absence of an estimation of fiscal impact of changes to policy proposals. This is further weakened by the frequent and significant in-year budget adjustments.

The frequent and significant in-year budget adjustments are a major concern as they weaken the efficient use of resources for service delivery. On the positive side, resources are sufficient and available for the provision of public service due to transfers from higher levels of government within the year and own local government resources.

Service delivery has been positively impacted by the timely inflow of actual transfers from higher levels of government even though they were unpredictable as far as the budget is concerned. In Ukraine, the sub-national government budget suffers from considerable in-year reallocations for both economic and functional expenditure categories, mainly due to a budgeting system (from central government) which prohibits local governments to budget for unknown revenues and expenditures. Nevertheless, the negative impact of these frequent budget reallocations has been reduced by the predetermination of service delivery programs to be funded, thereby having less negative impact on the outcome of service delivery programs.

Transparency of public finances and fiscal data is generally good, as it provides a basis for the City Government’s accountability, leading to improved service delivery. Public consultation for the development of service delivery programs as well as public investment projects with direct impact on service delivery needs to improve, as there is currently limited public consultation in this regard. There is a good accountability framework for SDUs own revenues, which ensures that these resources are used as intended, properly accounted and reported in a timely manner.

The Lviv City Government’s satisfactory cash management system ensures that there are constant cash inflows to SDUs for payment of expenditures related to primary services. The good news is that there are no expenditure arrears. The national public procurement system, also used by SDUs, encourages the use of open tender for majority of SDU procurement activities, which then contributes to efficiency in the use of public funds for primary service delivery. The general internal control environment is satisfactory, but SDUs will, however, benefit from strong internal audit functions that are currently absent due to the lack of independency and limited staff numbers of the centralized Internal Audit Department of the Lviv City Government. Additionally, external oversight appears to be weak due to the limitation in ACU’s coverage; nevertheless, the City Council scrutinizes the budgets and, in some cases, invites SDUs to response to financial management queries. 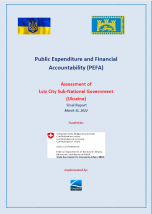