1.This Public Expenditure and Financial Accountability (PEFA) assessment covers the Brussels Capital Region (BCR), the smallest of the three regions into which Belgium is divided. Central government powers and responsibilities have since 1980 been progressively decentralized to the Governments of the Flemish (Dutch-speaking) and Walloon (French-speaking) regions and the Flemish and French linguistic communities. BCR was established in 1989 as a bilingual region. It has about a tenth of the country’s population, and generates about 18 per cent of GDP, but its residents are on average poorer than those in other parts of the country. Since much of the funding of the regional Governments accrues from personal income tax (corporate income tax and VAT accrue to the Federal Government) BCR has in recent years been in a weaker fiscal position than the other two regions and has been incurring substantial additional debt. Belgium as a whole continues to have a very high level of public debt – well in excess of 100 per cent of GDP – and expenditure of General Government absorbs around half of GDP. While progress was made during the period 2014-18 in reducing the annual fiscal deficit from over 4 per cent of GDP to less than 1 per cent, the deficit increased again in 2019. In the context of the European Semester, the European Commission recommended to Belgium to take action in 2019 and 2020 “to improve the composition and efficiency of public spending, notably through spending reviews, and the coordination of fiscal policies by all levels of government to create room for public investment”1. The Government of the bilingual BCR has signalled its willingness to pursue this agenda, and as a preparation for spending reviews has sought the support of European Commission’s DG REFORM in undertaking a general review of its Public Financial Management (PFM) systems, using the internationally recognized Public Expenditure and Financial Accountability (PEFA) methodology. Following a workshop for BCR officials provided by the PEFA Secretariat in early 2020, DG REFORM has contracted the AARC Consultancy to undertake a PEFA assessment covering all the operations of the BCR Government and its subordinate Autonomous Administrative Organizations (OAAs).

2. The BCR Government and its OAAs are responsible within its territory for the provision of economic and administrative services – infrastructure, transport, housing, employment support, environment. Education and cultural matters are the responsibility in Belgium of the Linguistic Communities rather than the Regional Governments; in the BCR territory these matters are covered by French and Flemish Community Commissions and for bilingual matters a Common Community Commission. This assessment covers only the activities for which the BCR Government and its subsidiary bodies are responsible. Although the budget voted by the Regional Parliament fully includes only the direct government services and those provided by Autonomous Administrative Organizations (OAAs) which are fully controlled by the Government, BCR has integrated all the operations of the other OAAs, which depend on subsidies from the budget in its consolidated annual financial statements for the regional entity as a whole. These bodies are mostly constituted as companies with Government Commissioners on their Boards of Directors; only the Government subsidies to them are included in the budget voted by the Parliament. Where the assessment depends on the experience of three years, the period covered by the PEFA assessment is 2017-19, with 2019 the most recent completed year. Government actions up to the end of 2020 are taken into account, including the enactment of the 2021 budget. In addition to the main PEFA assessment, this report includes the module which covers the extent to which gender issues are taken into consideration in decisions on revenue and expenditure.

OUTCOME OF THE ASSESSMENT

3. BCR Government services are provided by a wide range of separate departments and OAAs, each of which is required to maintain sophisticated accounting and internal control systems. In terms of the PEFA Performance Indicators it generally scores well. Budget credibility is strong, given that revenue is accurately forecast and expenditure close to the originally budgeted amount, with relatively small changes in its functional allocation during budget execution. Very full information is provided to Parliament, and unusually sophisticated consolidated accounting and reporting is firmly established, although its complexity may hinder understanding by ordinary citizens. A system of annual targets and performance reporting is in place, but it is focused on specific actions in a particular year rather than policy outcomes over a period of time. A system is in place for projecting revenue and expenditure, taking into account national economic projections and investment spending plans, but it does not take into account other factors which may be driving costs in the medium-term. The budgetary process is orderly within both the administration and the Parliament. Internal controls are strong: there are practically no arrears of expenditure, staff are correctly managed and paid, and EU procurement rules are generally complied with. Expenditure is accurately tracked, and full annual financial reports covering all parts of the administration and its OAAs are produced within a reasonable timescale. But the same degree of attention is not paid to whether the results really justify the expenditure incurred, or whether the services are provided in the most cost-effective way.

4. Despite the good performance in executing a budget very close to original plans, BCR is in a difficult fiscal position, with strategic investment plans currently being executed at a rate which, combined with ongoing current expenditure obligations, threatens future problems from an increasingly heavy debt burden. The complexity of the constitutional arrangements, with responsibility for some important public services undertaken by the Commission Communautaire Commune rather than the Regional Government, and the considerable number – over 20 – of OAAs involved in the provision of public services, mean that change will inevitably face obstacles. Budget documentation of all kinds required by Parliament runs to several hundred pages, and performance reporting is similarly voluminous; there is much scope for signposting more clearly what is important in terms of the achievement of policy objectives. The decentralization of activities to semi-independent OAAs adds to the difficulty of understanding the activities of government. Until recently relatively little consideration had been given to the provision of information to the general public, with budget material only published by Parliament and the federal Moniteur Belge after printing delays of several weeks. The launch this year (2021) of a “Budget for Everybody” and the provision of material for use in schools are important steps towards addressing these difficulties.

5. The main strength of the BCR PFM system has been its ability through strong accounting and control systems to deliver the execution of annual budgets more or less exactly as approved by Parliament. But the system does not provide the same degree of assurance that resources are allocated to best advantage, or that services are delivered as efficiently as possible. Aggregate fiscal discipline is thus adequate from the standpoint of annual budgeting, but a stronger grip needs to be taken over medium-term budget planning to ensure that the present difficult situation does not continue. Spending reviews are likely to be very important in this context, as is a strengthening of the role of Brussels Finance and Budget (BFB) in questioning the budgetary plans of all the different departments and OAAs. The competing investment plans of different actors need to be considered together, with detailed preparation by officials of analyses of all the costs and benefits. Performance audits and policy evaluations could contribute more to the development of PFM: at present resources for internal audit are very limited, and external audit has apparently been more concerned with the correctness of financial statements than with the efficiency of spending.

6. All in all the PEFA assessment identifies five areas where there is significant scope for improvement of PFM:

(i) Planning improvements over time in the quality of public services (PI-8);

7. This assessment has been undertaken early in the present Government’s term of office with a view to identify where PFM reform might best be pursued. So, for the most part the detailed agenda has yet to be developed. A multi-annual budget was presented for the first time at the end of 2020, and pilot spending reviews of mobility and housing programs are in place. As noted in paragraph 4 above, an initiative has already been undertaken by BFB to produce a simple citizen’s guide to the way public money is raised and spent. The current Government’s program (2019-24) speaks of bringing services closer to their users, and also of simplifying governance by bringing together the work of bodies connected either vertically (line of authority) or horizontally (through engagement in similar activities). These are all important steps in moving away from the present. 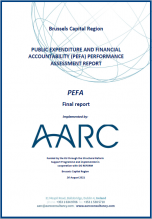