Indonesia is the world’s largest archipelago and fourth most populous nation, tenth-largest economy in purchasing power parity terms. It is one of the most socially, economically and culturally diverse countries in the world. Among its 231 million inhabitants, 49.76% are women, which are in a highly disadvantaged position vis-à-vis men. Although many Indonesians have moderate ideas on gender equality and women’s liberty, their view on patriarchy persists as well as significant percentages of early marriage, polygamy, forced divorce, illegal marriage, and female circumcision

The country is facing a gender gap challenges. It is ranked 85th out of 149 countries surveyed in the Global Gender Gap Index in 2018, and its overall global gender gap score has not significantly improved since 2006. The gender gap in political empowerment is most predominant with a score of only 0.193, followed by economic participation and opportunities with a score of 0.629. In the East Asia and Pacific region, Indonesia is ranked lower than Philippines (ranked 8th) and Lao PDR (ranked 6th).

The Gender Gap in Indonesia remains large despite its strong legal and regulatory framework that broadly supports gender equality. The Constitution protects equal rights for both men and women in various areas of economy, society, law and politics. The Marriage Law of 1974 defines equal marriageable age for both men and women. The Labour Law No.13/2003 provides rights for both maternal and paternal leaves. Law No. 32/2004 on Decentralization makes women empowerment as one of obligatory functions of subnational governments. Law No. 23/2004 on Elimination of Domestic Violence provides definition, protection and punishment for domestic violence. Law No. 39/2004 on Protection of International Migrant Workers provides equal protection to both men and women. Law No. 12/2006 provides civil rights for children in case of marriage of international migrant workers. Law No. 10/2008 stipulates minimum 30 % of woman representation in parliament.

The World Bank’s Human Capital Index (2018) ranked Indonesia as the 85th of 157 countries. The 0.53 score suggests that Indonesian worker of the next generation will only be 53% as productive as she or he could be under the benchmark of complete education and full health. This quality is certainly far below its neighbors such as Singapore, Malaysia, Thailand and Philippine. Indonesia is only slightly better compared to smaller less-developed countries such as Cambodia, Laos or East Timor.

Similarly, as per government statistics published in 2018, the Human Development Index for women is 68.83 in comparison to 75.43 for men, which means that women live in worse health, education and standard of living conditions.

The stagnant low female labor force participation is due to several factors. First, social norms, which imply that breadwinning responsibility lies on men and that women’s primary role is taking care of the household and children. Women is perceived to have only supplementary income generating role mainly in family business and in taking care of household which are unpaid works. Second, lack of flexible work arrangement and limited childcare options for women who work hinder women to participate in the labor force. Thirdly, limited access to finance. The gender gap in access to credit is a recognized phenomenon, and Indonesia is not an exception.  While women own more than half of MSMEs, only 13 percent of women-owned firms have accessed a loan from formal financial institutions, compared to 56 percent for their male counterparts. Third, access to resources, networks and markets. In addition to the challenge of accessing credit, globally there is evidence that most of the non-financial barriers affecting women-owned SMEs occur at the startup stage of the business life cycle, when limited awareness/knowledge and social networks can impact women’s ability to seek services that can realize the growth potential of their enterprises.

The ratio of women holding manager’s position is only 29 % in comparison to 71 % for men and women’s representation in parliament is only 17.3 % in comparison to 82.8 % for men. According to a report by the Central Statistics Agency, over 33 % of women, aged 15 to 64 years old, had experienced physical and/or sexual violence in their lifetime. Average time spent by women in school is 7.7 years in comparison to 8.6 years for men.  Although the overall illiteracy rate has declined annually, the literacy rate among females (89.6%) is lower than that for males (95.6%).

While Indonesia’s maternal mortality rate (MMR) has decreased significantly over the past two decades, the rate at present remains high, standing at 126 per 100,000 live births (World Development Indicators (WDI) 2015). This is significantly higher than the Millennium Development Goal (MDG) target of 102 per 100,000 live births and the average rate recorded by developing countries in the EAP (63) and by upper middle-income countries in general (55) (WDI 2015). In part, the high MMR can be attributed to the low quality of and level of access to basic and comprehensive obstetric care. While the participation of women in wage employment has increased (51.89%) along with their wage levels, the average wage of women is only 78% of the wage of men. 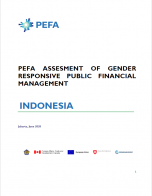