The purpose of the PEFA supplementary assessment of gender responsive budgeting (GRB) is to collect information on the extent to which gender is mainstreamed in Tonga’s public financial management (PFM) system and establish a baseline for future assessments. Tonga has taken initial steps in mainstreaming gender, so the assessment results are expected to facilitate the measurement of progress. The findings are also envisaged to serve as an input to the Government’s existing efforts to mainstream gender anchored by the Women Affairs Division (WAD) – a government agency within the Ministry of Internal Affairs, responsible for coordinating, monitoring, and providing advisory service to the development of gender and gender equality in Tonga. The Division issued a handbook on mainstreaming gender earlier this year with step-by-step guidance, including assessing gender impacts of budget proposals; and produced a document on gender statistics in Tonga that can serve as an input to line ministries in preparing their annual corporate plans. These assessment findings will help determine the baseline and where further efforts are required. This report was compiled using the draft PEFA GRB framework. The PEFA GRB assessment was led by the Ministry of Finance of the Government of Tonga and was funded by the International Monetary Fund’s (IMF) Pacific Financial Technical Assistance Center (PFTAC). The assessment team was led by Celeste Kubasta, and included Richard Neves and Kris Kauffmannn (PFTAC), Martin Bowen and Urška Zrinski (PEFA Secretariat), and Kelera Kolivuso Ravono (Ministry of Economy, Fiji). Quality assurance has been applied in accordance with the PEFA Secretariat guidelines. Five reviewers have been nominated: Ministry of Finance, PEFA Secretariat, IMF Fiscal Affairs Division, World Bank, and the Australian Department of Foreign Affairs and Trade.

The Kingdom of Tonga has not formally adopted gender responsive budgeting; however, there is commitment to advancing gender equality and development at the national, regional, and international levels. Tonga aware that, for gender policies to be effective, and men and women to benefit equitably, they must commit the necessary resources for initiatives to be implemented. This is referenced clearly in the National Women’s Empowerment and Gender Equality Tonga (NWEGET) policy and its Strategic Plan of Action 2019-2025. A new gender policy document aims to carry on the momentum generated by the previous National Policy on Gender and Development (RNPGAD) and its Strategic Plan of Action (2014—2018) and was developed by WAD under the Ministry of Internal Affairs. This revised policy continues to promote the concept of ensuring that Tonga’s development benefits are distributed and equitably accessible to everyone particularly the needs of family members. The policy is also consistent with Tonga’s Strategic Development Framework 2015-2025 (TSDF II), National Outcome 3 for a more inclusive sustainable and empowering human development with 4 gender equality. Embedded within this policy is gender mainstreaming in all government plans and services which has been regarded as one of the priority outcomes. WAD developed a Gender Mainstreaming Handbook in April 2019 through the support from the Pacific Community (SPC) under the Progressing Gender Equality in Pacific Island Countries (PGEP) initiatives and Pacific Women Shaping Development (Pacific Women). The handbook is designed to assist and guide government ministries and gender focal points on ways to mainstream gender and undertake gender analysis in their respective plans as well as how to design gender specific indicators in corporate plans of line ministries by capitalizing on sex-disaggregated data. As the Handbook is relatively new, it is expected to take more time for the results of gender mainstreaming to materialize. This will also require the Government - through its policies, technical capacities, financial, and monitoring resources - as well as the engagement of WAD, to raise awareness and provide training and support to line ministries, in particular the Ministry of Finance, for gender to be mainstreamed in the budget processes. WAD also prepared a guidance document ‘Gender equality: Where do we stand?’ which outlines how to improve the dissemination and use of gender statistics in order to better monitor progress toward gender equality. The document was funded by the Government of Australia’s Department of Foreign Affairs and Trade as part of the program Progressing Gender Equality in Pacific Islands Countries (PGEP) initiative. More recently, the Government published the results of the ‘Voluntary National Review 2019’ that gives an overview of results of implementing TSDF and capacity to implement Sustainable Development Goals’ (SDGs) commitments. As part of the review process, the Government identified key SDG indicators (69) to be of the most value in carrying out its development priorities. Among the indicators included is SDG indicator 5.c.1 which measures the ‘proportion of countries with systems to track and make public allocations for gender equality and women’s empowerment’ . The Office of the Auditor General has also recently conducted its first performance audit on Tonga’s readiness to implement SDGs, including SDG 5 on gender equality; and the report is currently under review by the Public Accounts Committee at the Legislative Assembly. 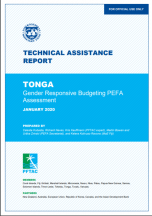