The objective of the PEFA 2020 report is to provide an assessment of PFM performance based on the indicator analysis and other crucial information. This is to be done in a concise and standardized manner following the 2016 methodology. The Framework applied to this PEFA Assessment is the latest framework issued by the PEFA Secretariat (issued in February 2016). This new Framework evaluates the impact of PFM weaknesses on the three levels of budgetary outcomes (aggregate fiscal discipline, the strategic allocation of resources, and efficient service delivery). It consists of 7 pillars and 31 performance indicators that measure the operational performance of the key elements of the PFM systems, processes, and institutions.

Although the PEFA Assessment does not provide recommendations for reforms or make assumptions about the potential impact of the ongoing reforms on PFM performance, the report acknowledges actions taken by the government to reform PFM systems by describing recent and ongoing measures.

As part of the strategy formulation process, coordination with other PFM-related work includes the AfDB-funded project in support of PFM in Liberia; the EU-supported project for the General Auditing Commission of Liberia; the International Development Association (IDA) allocation of funds for PFM; and the Sweden-IDA Trust Fund PFM project, among others.

Main Strengths and Weaknesses of the PFM Systems

Aggregate expenditure outturn is generally close to the approved aggregate expenditure. Actual revenues were less than 92 percent of budgeted revenues in 2017/18 and 2018/19. The variance in revenue composition was more than 10 percent in all three years.

Economic analyses are conducted for most major investment projects.

A register of fixed assets exists. There is also some information about transfers and disposals in annual financial reports.

The debt is well managed. Debt records are complete and updated monthly, quarterly and annually. Loans and issuance of guarantees are made by the Minister of Finance. A Debt Sustainability Analysis (DSA) is prepared by the IMF and the World Bank, and the report is provided to the legislature.

The budget is pluri-annual. Medium-term forecasts are prepared and submitted to the legislature. Estimates of the fiscal impact of proposed changes in revenue and expenditure policy are prepared by the Ministry of Finance.

All budgeted tax revenues are paid into the Consolidated Fund Account and bank and cash balances are consolidated daily into the Treasury Single Account (TSA). A cash flow forecast is updated monthly.

Budget formulation, execution, and reporting are based on administrative, functional, and economic classifications. Budget documentation and public access are at a good level.

The total cost and physical progress of major investment projects are monitored by the government implementation unit.

A medium-term fiscal strategy is presented to the Parliament. Sector strategies have been prepared for some sectors, but without a complete costing of investments and recurrent expenditures.

The budget preparation process is functional. Budget entities receive a budget circular, which is issued to the Ministries, Commissions and Agencies (MACs).

Significant administrative reallocations are possible. However, they are not easily monitored, hindering the strategic allocation of resources.

The LRA obtains weekly data from entities collecting all central government revenues and transfers to the Treasury that are made daily.

Counties and Districts receive information about annual transfers from national governments when the draft budget is published on the MFDP’s website.

The annual budget execution reports and external audit reports are made available to the public on a timely basis.

The LRA obtains weekly data from entities collecting all central government revenues and transfers to the Treasury that are made on a daily basis.

Significant in-year adjustments are frequent, but they are done in a transparent way. MDAs are provided with reliable information about the available resources for commitments only one month in advance.

The approved staff list and personnel database are reconciled manually with the payroll. Controls are sufficient for the payroll data of greatest importance. Partial payroll audits are periodically undertaken. The General Auditing Commission (GAC) also undertook a payroll audit in 2019.

The procurement database is reliable for less than the majority of operations, but the information is provided to the public. The procurement complaints system is partially compliant with international standards.

The majority payments are compliant with regular payment procedures.

Internal audit is operational and audit activities partially meet the professional standards of internal auditing. However, there was no evidence that management provides a partial response to annual audit recommendations for the audited entities.

Cash accounting is still used, and no system for monitoring suspense accounts has been designed.

Annual financial statements of the Consolidated Fund Account are provided to the General Auditor (GAC).

The Parliament issues some recommendations, but they are not specifically linked to those provided by the GAC, and there is no systematic follow-up.

There has been an underfunding of planned resources in all three years.

There is no report about the financial position and performance of state-owned enterprises (SOEs) and Counties/Districts, and contingent liabilities are not quantified.

With the current use of the cash basis International Public Sector Accounting Standards (IPSAS), not enough information is being generated about non-current assets.

The stock of expenditure arrears to suppliers is more than 50 percent of total expenditures.

Forecast sensitivities are not presented in budget documents, However, the budget circular does not contain medium-term expenditure ceilings, as multi-year appropriations are not yet permitted.

The monitoring is not done for all types of arrears, hindering fiscal discipline.

Expenditure commitment controls are in place, but for less than 75 percent of budget expenditures in terms of value.

Budget execution reports are not issued in a timely manner.

As expenditures are underfunded, planned resources have not been provided as planned, leading to significant administrative reallocations.

The functional classification is not sufficiently detailed.

Some elements that should be published are missing, such as financial assets, fiscal risks, the budget impact of new policy measures, and estimates of tax expenditures. Externally funded expenditures are not reported in annual financial statements.

The progress of the budget strategy is not analyzed in the documentation provided to the Parliament.

The horizontal allocation of transfers to Counties and Districts is not determined by transparent, rule-based systems.

Projections of the total capital costs are not included in the budget documentation, and no information about the implementation of major investment projects is published.

The budget circular does not include ceilings. Insufficient time is given to the budget users to complete their detailed estimates. This leads to delays in submitting the annual budget proposal to the Parliament. Parliament often does not have enough time to vote on the draft budget before the end of the fiscal year.

Not all planned audits are completed.

The LRA does not prepare a Consolidated Revenue Accounts Reconciliation.

Data accuracy is questionable, and data issues are not highlighted in the quarterly reports.

Variances in expenditure composition by economic type exceeded 15 percent for each year of the period under review, thus hampering efficient service delivery.

Counties and Districts receive information about annual transfers from national governments only when the draft budget is published on the MFDP’s website, which affects the development of their budgets and associated services.

No annual performance report or documentation shows that surveys were carried out to assess the efficiency of service delivery.

There is insufficient information about service delivery to the public.

Budget proposals are not aligned with estimates presented in the strategic plans, and yearly changes to expenditure estimates are not explained.

The LRA does not prepare a Consolidated Revenue Accounts Reconciliation. The stock of revenue arrears older than 12 months represents more than 75 percent of total revenue arrears for the year, hindering the efficiency of service delivery.

There is no monthly follow-up of the payroll.

Less than 60 percent of the total value of contracts is awarded through competitive methods.

The reconciliation of bank accounts does not take place on a regular basis. Budget execution reports are not issued in a timely manner, hindering follow-up on service delivery.

The AFS they are generally incomplete and are not compliant with the IPSAS cash basis. The Auditor General cannot send his report to the Parliament in due time because the government takes too much time in providing his response.

The Public Account Committee examination of audit reports generally takes more than 12 months to complete, and the reports are not published.

Parliamentary recommendations are not specifically linked to those provided by the GAC, and there is no systematic follow-up.

Impact of PFM Performance on Budgetary and Fiscal Outcomes

The evaluation of PFM in Liberia shows that there is a mechanism for monitoring budget execution. However, budgetary discipline is not yet fully ensured because the Integrated Financial Management Information System (IFMIS) is not yet being used by all the spending entities. The strategic allocation of resources and the effectiveness

of service delivery are also partly hampered by optimistic revenue forecasts that cannot be achieved, and partly because allotments voted by the National Assembly are extensively modified during budget execution.

The figures below present a ranking of the indicators related to the objective of overall budgetary discipline according to their different levels of performance. These are established based on the numerical rating of each indicator. Detailed budget execution does not reflect the amounts voted by the Legislature, which are supposed to correspond to the Government's proposals.

Actual budget revenues (and expenditures) were lower than initially estimated. This situation contributes to the generation of large domestic arrears, which are generally not cleared in the following fiscal year and added to the large amount of domestic debt. The budgetary risks, although not well assessed, are nevertheless limited.

Efforts have been made to improve budget preparation, but the spending entities had only one week to submit their detailed estimates. Any improvement would also remain inefficient if budget allocations to spending entities are not respected by the Executive.

Finally, the MFDP produced only a Financial Statement of the Consolidated Fund Account. Yet, significant expenditures are made outside of the Treasury Single Account (TSA), especially for programs and projects financed by donors — even if their estimates are presented in an Annex of the draft national budget.

Nevertheless, overall fiscal discipline is based on good debt monitoring and a robust macroeconomic framework, despite the absence of a review of the forecasts by an entity other than the Liberia Macroeconomic Policy Analysis Center (LIMPAC) that prepared them.

Financial resource allocations are generally not in line with the government's stated priorities. The strategic allocation of resources is weakened by the lack of efficiency in tax collection and the budget preparation process, as well as the lack of transparency in transfer procedures to sub-national governments.

Moreover, the procedures for presenting the budget to the Parliament are relatively well respected, apart from the existence of significant delays.

Public services provided by the administration are insufficiently controlled and monitored by the Executive.

Health, education, water, and electricity services, and so on, are underfunded due to the high level of spending on wages and recurrent expenditures. The Government of Liberia (GoL) pays for most of the salaries, but it does not pay for the maintenance costs and investments needed in these sectors, which are also not published. In addition, the data published on the MFDP website in the quarterly budget execution reports are always presented with delays, and the data are not very reliable. 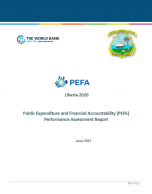