1. This report presents the findings of the assessment of the public financial management (PFM) systems of the city of Khmelnytskyi based on the PEFA methodology as revised in 2016. It covers all operations under the control of the city during the period 2016-18. Where applicable the cut-off date is 31 October 2019. It is intended that the report should be considered alongside parallel PEFA reports on three other types of subnational (SNG) – oblast, rayon and amalgamated hromada – so as to give a comprehensive picture of PFM at all levels of SNG which can be used to prepare an overall paper on possible future improvements to be pursued in the context of a new PFM reform plan from 2020 onwards. It has been commissioned by the Swiss Secretariat for Economic Affairs (SECO) following discussions with the Government of Ukraine and its other principal development partners, the World Bank (WB) (which is undertaking the assessments of an oblast and a rayon) and the European Union (EU) (which has commissioned the report on an amalgamated hromada (AH)). The report has been prepared in accordance with a Concept Note on the same lines as those prepared for the other assessments, which was approved by an Oversight Committee of the principal stakeholders, national and international, on 20 January 2020. Preparation of the draft report was undertaken during the period from November 2019 to April 2020. The final published report will take account of the comments on the draft by the PEFA Secretariat and the main national and international stakeholders.

2. Ukraine has a relatively complex structure of subnational governments (SNGs) with three tiers below the central government: the top tier of 24 oblasts (and the city of Kyiv), the second tier of 474 rayons (districts) together with 166 cities of oblast significance (COSs) and 665 amalgamated settlements (AHs), and the third tier 7,627 cities of rayon significance and not yet amalgamated settlements. SNG revenue is largely determined by central government which fixes almost all tax rates and collects all taxes; in addition to prescribed shares of national tax revenue collected in their areas SNGs receive transfers from the centre allocated by formulae which take account of population numbers and relative prosperity. The amounts of these transfers have frequently been revised upwards during the course of budget execution. The managements of oblasts and rayons are appointed by central government, but the leaders of COSs and AHs are locally elected. Funds generally reach a lower tier SNG through the higher tier in which it is situated, but COSs and AHs are funded directly from central government.

3. The main findings of the assessment are focused on whether the city has appropriate systems in place to assist it in maintaining aggregate fiscal discipline, allocating resources strategically and using them efficiently for service delivery. A summary of the findings on the individual elements of the PFM systems – pillar by pillar – is provided in Chapter 4.1 below, which is reflected in the table of scores at the end of this summary.

4. Both revenue and expenditure exceeded the original budgets by substantial margins during 2016-18, when Ukraine experienced considerable, although declining inflation. The city budgeted cautiously, and both the revenue from its share of tax receipts, and transfers from central government for social welfare (in 2016 and 2017) and investment, were well in excess of the amounts in the original budget. The provision in the Budget Code enabling SNGs to reappropriate any surplus remaining at the end of each year to increase the following year’s expenditure once the earlier year’s budget execution report had been submitted, was a further factor leading to expenditure out-turns exceeding original budgets. In these circumstances Khmelnytskyi was able to meet all its intended expenditure without any risk that the necessary revenue would not be available.

5. Although there was no comprehensive medium-term fiscal planning in place during 2016-18, the city’s investment programme was carried forward within the framework of its strategic development plan. The education service in particular benefitted from the city’s ability to finance teachers’ salaries well above the minimum levels on which targeted transfers from central government were based. Nursery education and sports and cultural facilities were all expanded. However, the absence of any assurance of medium-term central government funding for investment adversely impacts the planned development of city services.

Efficiency in the use of resources for service delivery

6.The city gets good scores for most of the Indicators concerned with the processes of budget execution, although there is no execution reporting on the administrative classification. Procurement is a partial exception, where a high proportion of the contracts (by value) were let without competition; procurement is delegated to each individual budget user subject to relatively little supervision and monitoring. A start has been made in establishing indicators of performance in the delivery of public services, and reporting on actual delivery. But the process needs to be more consistent in the treatment of objectives and subsequent performance, and to be fully integrated in a medium-term fiscal planning framework. The objective of increased cost-effectiveness should be demonstrated by indicators of outputs and quality against quantity and costs of inputs. Internal audit is not currently functioning, and external audit coverage is limited; further development of these functions would provide increased assurance that resources are being used to their best advantage.

7. Following the 2014 crisis and the resulting fiscal retrenchment, successive governments have sought to improve public services by decentralizing responsibility to SNGs while at the same time adjusting the allocation of national revenues so that the SNGs concerned are able to dispose of the necessary resources. The Budget Code has been amended to provide for medium-term fiscal planning and for the development of internal audit as a service to assist management in making the best use of resources. A new PFM Reform Strategy for the period 2021-24 is being developed to follow on from the results of the 2017-20 Strategy. The intention is to improve the allocation of resources through medium-term budget planning, including the development of results-oriented budgeting at SNG level, while increasing transparency and accountability for PFM throughout the country. It is intended that the findings of this PEFA assessment, alongside those of the recent central government PEFA assessment and those of the other levels of SNGs, should be taken into account in determining the direction and timing of future PFM changes. 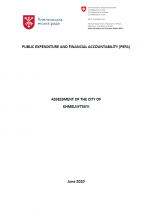