The purpose of this PEFA assessment is to provide an objective analysis of the present performance of the PFM system in Fiji against the PEFA indicators. This PEFA establishes a new PEFA baseline using the 2016 PEFA methodology.   Although there was a PEFA carried out in 2013 (using 2011 PEFA methodology), the report was not finalized in terms of receiving the endorsement of the PEFA Secretariat or full acceptance of the Government.  Accordingly, it has been decided that the 2019 PEFA would better serve as a baseline rather than a repeat assessment.

Following the 2013 PEFA, the “Public Financial Management Improvement Program 2016-19” (PFMIP) was developed.  PFMIP is considered a working document.  There are frequent staff meetings on the results and management receives updates on progress.  A new PFMIP will be prepared after the PEFA assessment.  This roadmap will provide the Government of Fiji the opportunity to progress existing reforms and introduce new activities based on the PEFA scores.

Overall, the results of the PEFA show a public financial management system in Fiji that is on track to be strong in terms of control of the execution of the budget.  There are notable weaknesses in timeliness of the annual financial statements that impinges on realizing the benefits of the good external scrutiny that Fiji possesses.  This is offset by good in-year budget execution reports and an emerging internal audit with a proper framework now being established.  The budget process is evolving and some features of a multi-year approach are in place and reflected in the budget calendar but is hindered by the absence of a functional or program classification system and the absence of key performance indicators.  Unrealistic revenue forecasts contribute to the prepared budget being unrealizable.  In –year revenue reporting is good as is revenue administration. On the expenditure side, cash planning is relatively effective and in reality replaces the budget forecasts.  Effective commitment control enables effective management of the release of the budget determined by monthly warrants linked to the cash availability which is guided by the priories set out in the budget.  Nonetheless, it also requires the budget to be rearranged as planned expenditures cannot be funded, which can result in cash rationing.

As noted, the overriding feature of PFM in Fiji has been the overambitious revenue forecasts that are produced for the budget in the three years covered by the PEFA assessment.  The Fiji Revenue and Customs Services has made significant progress in reforming its operations over the recent past and this is reflected in the PEFA scores relevant to revenue administration and accounting for revenue.  As a result of the implementation of the restructuring of its operations and processes, there was a growth in tax revenue which was due to the improvement in compliance with respect to collections.  Such year to year growth will be primarily reflected in the initial years as a step change, but it is unrealistic to expect that this will be repeated on an annual basis once the reforms have been implemented.  As noted in the revenue outturn indicator the Fiscal Department in the MOE is responsible for revenue forecasts and discussion indicates that increased revenues from compliance had been built into the model on an annual basis which was too ambitious and unachievable.  The model that produced the forecasts for the 2019-2020 budget has been made much more realistic with respect to the compliance impact on revenues.  These overambitious revenue forecasts have nevertheless impinged on the overall impact of the fiscal system in terms of aggregate fiscal discipline, the strategic allocation of resources and the efficient use of resources for service delivery as what is planned cannot be fully delivered.

Aggregate fiscal discipline is achieved due to control over spending during budget execution, as well as realistic revenue forecasts.  However, in the case of Fiji. both aggregate expenditure and revenues outturns have been well below forecasts even though strong revenue administration has ensured that revenues are efficiently collected.  Operationally the planned budget has been adjusted to realistic levels though cash forecasting that feeds into monthly allocations and commitment control.  Treasury operations and cash management enables expenditures to be managed within the available resources.  Control of contractual commitments is effective although the information on arrears is weak and needs to be addressed.  Given the dichotomy between the revenue forecasts in the budget and the monthly cash flow forecasts, both virement and supplementary are used at level than would be seen in normal situations.  The strong external audit function and parliamentary scrutiny enhances fiscal discipline but the delays in producing annual financial statements impinge on their effectiveness.

The Chart of Accounts caters only to economic and administrative analysis of expenditure.  There is no link between the medium-term perspective in expenditure budgeting and costed strategic plans and an absence of a focus on achieving results that is consistent with a strategic allocation of resources.  There is some emphasis on the overall fiscal framework but this is weakened by a lack of analysis and reporting of changes in circumstances relating to fiscal strategy and implications of policy changes. Weak management of investment affects the strategic allocation of resources. Recurrent cost implication of investment is not factored into the budget process and investments are not selected to generate the best return.  Similarly, the untimely information on the extrabudgetary sector weakens the strategic allocation of resources.  Transfers to local governments are not determined by transparent rules.  While budget documentation and public access is at a good level, there are elements that are missing such as tax expenditures and timely audited financial statements that weaken accountability.

The current weaknesses in the procurement system with respect to the appeals and dispute process could have adverse implications for the efficiency in service delivery, though the strong focus on competitive bidding is a positive feature.  The strengths in the accountability mechanisms make external audits effective as counter checks on inefficient use of resources.  However, weaknesses in the production of consolidated annual financial statements limit the impact of audits which in turn limits the effectiveness of oversight.  These are offset, however, by the strength of the in-year budget execution reports which includes information on the realization of annual targets for outputs and objectives.  The lack of performance targets and outcomes deters from the efficient use of resources in service delivery units. On the revenue side, operational efficiency is compromised by the accumulation of tax arrears but arrears now cover historical rather than current arrears. Lack of effective tax debt collection undermines credibility of tax assessments and the principle of equal treatment of taxpayers.

The internal control environment is generally sound.  The scores in related indicators and dimensions reinforce that controls associated with the day-to-day transaction of the budgetary central government are functioning and enable a system for good data integrity regarding the activities of these entities.  The laws and regulations provide the legal framework, and allow for specific roles and responsibilities, segregation of duties, and operating processes.  The system embeds access controls and audit trails that support the internal control framework.

The Ministry of Economy is responsible for overall public financial management and ensures the promotion of sound financial resource management practice among the various Government agencies.  It is also responsible for promoting sound economic management of the national economy, consistent with macroeconomic targets for sustainable long term development.  There is an Auditor General which while dependent on the government budget process, is independent in delivering its mandate. In the context of a parliamentary democracy, there is scrutiny of the budget as well as audited financial statements through elected representatives.  This structure endures that there are checks and balances that promotes technical improvements to eliminate weaknesses in delivering public services. 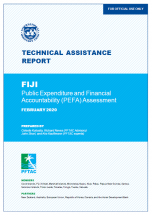