The Government of Ukraine has over the past few years been implementing series of measures in the decentralization sphere with a view to undertake deep structural reforms in order to make the economy more efficient and to ensure sustainable growth. It is against the backdrop of such ambitions that Ukraine has recently adopted a very bold and elaborative Decentralization Agenda which became a top reform priority of the Central Government. The reform included the shift of fiscal responsibilities to local governments which was adequately being followed by decentralization of the delivery of key public services such as education, health and social welfare. The Concept for Reform of the Local Government and Territorial Organization was adopted by the Council of Ministers in April 2014. Consequently, the program was also reflected in a range of systemic legislative pieces among which are the Budget Code and Tax Code of Ukraine.

The overall objective of the SNG PEFA assessments is to review the current performance of the public financial management systems, processes and institutions of the Starosynyavska ATC Amalgamated Hromada using the 2016 PEFA Framework plus the 2016 Supplementary Guidelines on Sub-national Government Assessments. The SNG PEFA assessment is aimed at evaluating the quality of SNG PFM systems and allowing for detection of PFM strengths and weaknesses in order to formulate policy actions and programmes to address potential PFM challenges.
The assessment was conducted in line with the PEFA 2016 Framework as developed by the PEFA Secretariat, and the December 2016 Supplementary guidance for subnational PEFA assessments. These documents, as well as other guidance documents available from the PEFA website (www.pefa.org) such as the 2nd edition of the PEFA Handbook – Volume II dated December 2018 were used to conduct the assessment. The assessment adhered to the requirements for PEFA CHECK quality process as of January 2018.
Annexes 3A and 3B outline a detailed list of information used for this assessment and a list of stakeholders interviewed respectively; no other surveys and/or analytical work was used in this assessment. The SNG PEFA assessment covered local government budgeted units (specifically Finance Office, Education and Sports, Water, and Public Works), extra budgetary units, public corporations, the Accounting Chamber of Ukraine1, the State Audit Service, local branch office of State Fiscal Service and the Village Council. The FYs for the assessment are 2016, 2017, and 2018. The last budget submitted to the village council is the FY2019. Some indicators/dimensions were assessed as at the time of the field work (July 2019 as cut-off period).
The assessment management framework, oversight and quality assurance are summarised in Box 1.1 below. The assessment was funded and managed by the European Union under the LOGICA Project through Hulla & Co Human Dynamics KG, whose Team Leader is Boris Petkov and supported by Milos Markovic who is the key expert on the project. The assessment team launched a PEFA training workshop on July 1-2, 2019 aimed at the key government officials of Starosynyavska ATC administration but also with representation from MoF and donors. The workshop was carried out with substantial assistance from the PEFA secretariat resident in Kiev (Julia Dhimitri) who provided overall guidance through the PEFA framework; she was supported by the international and local PEFA/PFM consultants recruited for this assessment.

The impact of PFM performance on aggregate fiscal discipline, the strategic allocation of resources and the efficiency of service delivery

The fact that budget classification (detailed enough to ease traceability and transparency of local government resources) meets international good practice and information contained in the budget documentation is reasonable for citizens to digest useful fiscal data, strengthens strategic resource allocation. This is however negated by the fact that budget execution reports are not consistent with originally approved budgets. Furthermore, the absence of a citizens’ budget (an abridged version of the main budget documentation) limits ordinary citizens’ ability to fully appreciate the extent of resource allocation in order to demand more accountability. Strategic resource allocation is also strengthened by the fact that the finance department prepares some macroeconomic forecasts but without GDP, with the disclosure of the underlying assumptions, which are subsequently reviewed by the executive committee. The practice however appears to be a mere formality as there is no correlation between fiscal forecasting and outturns on central government’s subsidy and own revenues.
There is no fiscal strategy – a policy document that outlines government’s medium-term revenue and expenditure framework in terms of how it wants to generate revenue and for what expenditure; this raises questions regarding government’s ability to make resources available to fund its policies and programmes. The budget preparation and approval processes are also weak (some of these weaknesses include: (i) budget ceilings not approved by the executive committee, (ii) delays in budget submission to the village council for approval, and (iii) delays in legislative budget approval), contributing to inefficient resource allocation. The impact of the above weaknesses is limited due to the fact that the local government receives significant resources from central government after local budget approval which facilitates the implementation of programmes. Again, domestic revenues (tax and non-tax generated by the local government) is well administered and accounted for, thereby making resources available for efficient service delivery.

Primary service delivery is good, based on a number of factors: (i) the local government receives significant amount of resources from central government; (ii) local/domestic revenues are well managed and allocated; (iii) planned performance outcomes/outputs and actual performance, and resources received in kind and cash are well communicated to the public for proper accountability. That notwithstanding, efficient service delivery is negatively impacted by the huge and frequent in-year budget virements as well as the functional and economic budget reallocations. Another element that negatively affects service delivery is the non-competitiveness of public procurement; most procurement activities are non-competitive – this could imply high cost of service and less efficiency. At present, there is no functional internal audit unit in addition to a well- documented internal control framework to effectively detect and prevent fraud and financial irregularities; that said, the current crop of public servants is well motivated and exhibit a high-level of professionalism to protect public assets in spite of low technical capacity. It is also positive to note that regular and timely reconciliation of resources (cash and advances) assures the availability of resources in a timely manner for efficient service delivery

There is no standalone PFM reform strategy for Starosynyavska ATC local government; all reforms are driven by the central government. The main ongoing reforms include but not limited to the following:
• Reform of government decentralization and amalgamation of territorial communities (2015-2020): It is expected that 2019 will be a key year in setting the basic level of local self-government: by the end of the year, most existing small local councils may amalgamate, and thus local governments will become more capable, use resources appropriately, and be accountable for their responsibilities. This will provide a sound basis for the next steps in local government reform, as well as accelerate reforms in health, education, social services, energy efficiency and other sectors
• Increasing financial transparency and accountability of local self-government bodies (2019): The strategy of reforming the public finance management system for 2017-2020 foresees the development of general recommendations for local self-government bodies on the preparation and approval of Budgetary Regulations. The key objective for the preparation of the recommendations is to provide local authorities with guidelines for drafting and adoption of the Budget Regulation – document that establishes the order for implementation of budget process at each stage, determines their timing and parties responsible for the timely implementation of appropriate measures
• Medium-term budget planning at the local level (starting in 2020): In accordance with the Budget Code of Ukraine (BCU) (Article 751), medium-term budget planning at the local level would have to be implemented from 2020. According to the 2017-2020 Government Strategy for PFM reforms, the medium-termthe local government) is well administered and accounted for, thereby making resources available for efficient service delivery.

• Changes in financing of individual social expenditures (starting in 2020): In order to improve management of budget expenditures, the Government prepared draft amendments to the Budget Code of Ukraine (Draft Law Reg. No. 2144), which was submitted to the Verkhovna Rada (Parliament) of Ukraine together with the draft State Budget of Ukraine for 2020. In particular, the draft State Budget of Ukraine for 2020 contains the transfer to the Ministry of Social Policy of Ukraine of expenditures that are currently being carried out through appropriate subventions from the State Budget to local budgets (in particular, for granting benefits and housing subsidies to households for the purchase of solid and liquid household fuel and liquefied gas and public social assistance expenditures).
• Accounting in the public sector (2018-2025): Central government is in the process of modernizing accounting and financial reporting to be in line with IPSAS. An electronic version of the original IPSAS text has been obtained by the Ministry of Finance for the purpose of implementation of the above. The IPSAS text is currently being translated. The new chart of accounts in the public sector are to be applied by the Treasury bodies from 2019. 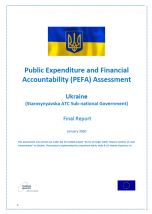