Performance changes since the last assessment in 2015

[3] United Nations Entity for Gender Equality and the Empowerment of Women. 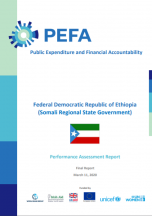