Performance changes since the last assessment in 2015 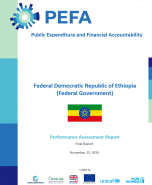