Key Messages from the Event "Who Benefits from Public Spending"

The webinar “Who benefits from public spending?” was a virtual event jointly organized by the PEFA Secretariat and the World Bank’s Accelerate Equality Campaign on 13 July 2022 and attended by 250 participants worldwide.

The event was moderated by Adenike Oyeyiola, Practice Manager, World Bank Group, and brought professionals together to discuss why fiscal policies and PFM systems are critical in achieving gender equality or other equality objectives: why they matter, what has been achieved, and how to address the remaining challenges.

The discussions underlined how gender equality is a “must-have” for macro-economic stability, shared growth, and reducing poverty. “Why does IMF talk about gender? Because it strongly believes, and now knows from evidence, that gender is macro critical for long-term productivity growth and inclusiveness of that growth”.

Now is the time to focus on gender equality more than ever: as Arturo Herrera, Global Director of Governance from the World Bank noted, we cannot go back to 2019: although COVID-19 has hit us all, its consequences have not been felt equally. For example, in remote and most vulnerable areas of Kenya, 16% of girls did not return to schools once they reopened, while the dropout figure was 8% for boys. 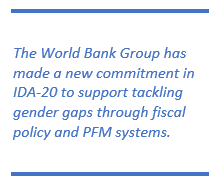 Arturo also argued that recognition that gender is a priority is not enough: budgets also need to reflect this. Gender budgeting is a powerful tool for tackling gender inequality which also amplifies the effectiveness of fiscal policies.

Vincent Tang from the IMF explained that gender budgeting is a significant movement in almost every G20 country and beyond the G20. IMF research has shown that it has enabled a greater focus and allocation of resources to gender equality. It has made a real difference.

But it is not all about the money: integrating gender into public finances is also about a deeper understanding of how to budget policies impact women and men, whether intentionally or unintentionally – who benefits and who does not. We need to understand and tackle the inequalities, which in many ways are still built into the fiscal policies and PFM systems, Hana stressed.

Chiara Bronchi, Practice Manager, World Bank Group agreed: several countries have taken steps to use fiscal policy to close the gender gap, including understanding and addressing some of the underlying implicit and explicit biases. She gave examples of legal measures that have been taken to provide concessions for the purchase of transfer property in women’s names, or using discounts on stamp duty to encourage female property ownership.

Grace Ntereke from the Ministry of Finance, Botswana, also noted that while understanding the PEFA gender PFM assessment, they had learned that gender impact is not only about what has been allocated and spent, but focusing on results on the ground, such as whether the procurement system incentivizes and supports marginalized groups, or not. Ursula Rosenbichler from Austria shared how robust performance management systems and data on outcomes have been critical in Austria’s experience. This helps to prioritize spending to areas with the most significant impact.

But there are still significant challenges that the participants agreed required a more concerted, coherent effort by governments across the board – gender experts, fiscal and budget officials alike, to integrate gender into the fiscal policies and PFM systems.  In particular, the task is critical at the end of the budget cycle: implementing the gender budget policies and monitoring their impact needs greater focus.

Erica Gerretsen from the European Commission concluded that enhancing cooperation between institutions, sharing knowledge and experience, and promoting policy dialogue will lead to improving gender equality that will support the economies the most effective way.

In this work, there is excellent support available:

See links below to relevant material discussed during the event:

IMF Research on Budgeting in G20

Click on the image below to see the video recording of the event: