Using fiscal resources to achieve results is critical for equitable development. Accordingly, many countries have sought to strengthen their PFM systems, following a fairly standardized set of reform recommendations and approaches. Yet, the results achieved, as well as the pace of reforms and the areas of progress vary considerably across countries. From an impact perspective, it is critical to understand what accounts for such different rates of progress.

While non-technical drivers such as ‘political commitment’ are widely considered important, to date there has been little systematic analysis of how such drivers matter for reform progress, or how to utilize such insights when developing and pursuing PFM reforms. This report maps out what PFM progress looks like across countries, regions, and income groups, and then drills down into specific experiences.

Based on a detailed tracing of PFM reform progress in a small N sample of countries, it explores the underlying nontechnical drivers and constraints reformers faced, and how these influenced the feasibility and robustness of efforts to strengthen PFM. While not presuming to offer a complete set of answers on how to better approach PFM reforms, the authors aim to provide a stronger empirical basis for some key questions, and to offer some concrete guidance on how reform stakeholders and external supporters can take non-technical drivers into account and better calibrate their approaches to PFM reforms. 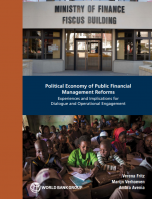