The principle of participatory budgeting (PB), as a mechanism to foster the involvement of local communities in sub-national public financial management (PFM) systems, rarely generates strong opposition given its inherent ability to embed ‘pro-poor’, equitable, and/or inclusive approaches to the allocation of public resources. Yet, and somewhat paradoxically, the depth and/or extent of its implementation and efficacy in many countries are seen to be limited in scope or lacking in dynamism. Drawing from a fieldwork of PB practices in selected municipalities in Benin and insights from different actors in the field (elected representatives, government officials, community groups, civil society organisations, donors), we add to existing expositions on PB’s emancipatory features, in terms of the space and voice it can offer for local engagement. At the same time, we see the need for a step change at the PFM supra-national policy and national/sub-national levels to ensure PB can be developed in a more strategic, sustainable and inclusive way - while minimizing the risks of ‘PB capture’. Our key recommendations are (i) the incorporation of PB within broader PFM frameworks and PEFA assessments at national level, and improving PEFA’s proposed subnational government indicator on public consultation, (ii) the promotion of a community of practice, by PEFA partners and the development agencies, to share good experiences and mechanisms, with the involvement of international PB networks, (iii) the need to embed a PB feedback process at national/sub-national levels to foster a cycle of learning, sustainability and inclusion within the community.

This paper is a product of the 2019 PEFA Research Competition that focused on the role of Public Financial Management (PFM) in public service delivery. The PEFA Research Paper Series provides open access to PEFA sponsored research to quickly disseminate knowledge that contributes to ongoing PFM discussions around the world. The broader objectives of the PEFA Research Competition are to contribute to addressing gaps in knowledge on fiscal management, how to improve PFM systems, and the practical implementation of PFM reform. The papers carry the names of the authors and should be cited accordingly. The findings, interpretations, and conclusions expressed in the papers are entirely those of the authors. They do not necessarily represent the views of the PEFA Program or those of the PEFA Partners. 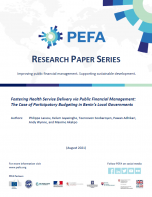