1. This report presents the findings of the first assessment of PFM systems in the Municipality of Fier based on PEFA methodology. The objective of the assessment is to gain a better understanding of the strengths and weaknesses of municipal PFM systems as a basis for discussing PFM reform priorities and possible areas of support to the newly restructured municipality. The assessment is based on the performance of the PFM systems as at October 2016 and during the period prior to that as defined by PEFA methodology. It is focused on the amalgamated Municipality following the 2015 merger with nine former communes (Libofshë, Dermenas, Qendër, Mbrostar, Topojë, Levan, Frakull, Portez and Cakran) as part of the Territorial Administrative Reform (resulting in a more than doubling of the population), but covers for a number of issues the period back to FY2013 inclusive.  It is one of a series of five assessments of Tirana and other municipalities financed by SECO and USAID/PLGP, with the sample selected so as to have a view of PFM in large, medium and small municipalities. Fier, with a population of 120,000 is the largest municipality assessed apart from the capital city, Tirana.

2. The main findings of the assessment are focused on the whether the Municipality has appropriate systems in place to assist it in maintaining aggregate fiscal discipline, allocating resources strategically, and using them efficiently for service delivery. A summary of findings on the individual elements of the PFM systems – indicator by indicator – is provided in section 4.1 of the report below, which is reflected in the table of scores at the end of this section.

3. Overall fiscal discipline is not a primary concern, although a number of issues need to be addressed. The Municipality is bound to balance its budget as – in common with almost all Albanian municipalities - it has no realistic prospect of borrowing to finance a fiscal deficit. About three quarters of its income consists of conditional and unconditional transfers from central government, which effectively determine much of its expenditure. The amounts and timing of these transfers are generally predictable during budget execution, but they are not set within a multi-year framework which would enable the municipality to plan their use effectively.

4. A major concern is the indifferent performance in the Municipality’s own revenue collections. Fier collected only 58% of planned local revenues (incl. taxes that in practice would be considered shared taxes) in 2013, 78% in 2014 and 85% in 2015. Such revenues on average cover about two thirds of actual expenditure. Actual capital investments constitute between 5%-8% of Fier’s budget from own local taxes and fees and freely disposable intergovernmental transfers. Major public investment are currently financed from conditional intergovernmental transfers from the Regional Development Fund. Funds awarded and actually executed from the RDF constitute 23% and 37% of Fier’s own budget in FY 2014 and FY 2015. Notwithstanding the policy choices to seek investment financing from the RDF, underperformance in revenue collection have thereby substantially reduced the city’s scope for initiatives of its own. This situation is partly a reflection of limits placed by central government on municipal taxing powers but also reflects inadequacies in the city’s property and taxpayer records, and in the efforts made and instruments available to enforce payment.

5. Municipalities in Albania have only limited scope for choice in the allocation of resources. They have little responsibility for the provision of the main health and education services, and their involvement in social protection is essentially that of an agent of central government. In accordance with national requirements, Fier has prepared its General Local Plan (GLP), which incorporates its Territorial Development Strategy (TDS) and provides the basis for its Capital Investment Plan (CIP). However, implementation of these plans depends almost entirely on funding from central government, which has been highly unpredictable from year to year. The existence of these plans should mean that if resources become available, they will not be wasted; but the municipality does not decide the order in which its chosen investments should be executed.

6. Investment apart, the city’s predictable resources from its own revenues and from unconditional grants distributed according to a national formula are largely pre-empted by the ongoing costs of running the city administration, keeping the city clean and tidy, and maintaining the public infrastructure. The allocation of resources to these functions is unlikely to change much within a fiscal year, or even between one year and the next. But the unpredictability of investment funding means that the functional composition of expenditure as measured by PEFA may change considerably between budget and out-turn.

7. Formal requirements for transparency and public consultation on the budget appear to be observed. But there is no evidence that discussion by the Municipal Council of the mediumterm plans or the annual budget makes much overall difference to the outcomes. Although the recommendations of external audit reports are freely available on the High State Control website, the reports have not been discussed by the Council. Although freedom of information legislation means that annual and in-year budget execution reports should be available on the city website, it is not clear that this requirement is consistently followed.

8. It appears that the TAR has resulted in an overall reduction in the municipal wage bill, as not all the staff of the former communes have been absorbed by the new municipalities. This should already mean an efficiency gain, which should be reinforced by the new municipalities’ greater ability to deploy staff and other resources in preparing plans and dealing with problems. In the medium term there should be scope for efficiency gains through the improvement and integration of IT systems; while the fact that all revenue and expenditure transactions are recorded in the national Treasury system provides an important element of overall structure, there are no automatic links between municipal budgetary systems and the Treasury, with most municipal operations (budgeting, revenue, payroll, procurement) dependent on separate and relatively basic IT systems. There is clearly room for a central initiative to develop integrated IT systems which could be used by all municipalities. There is formal compliance with requirements for budgets to be presented in a programme format, but many municipal operations do not readily lend themselves to this, while little progress has been made in setting objectives to be secured by such programmes, and identifying performance indicators to measure progress towards their achievement. Other efficiency gains will be dependent on improvements in investment planning, which require changes in the way the central government allocates conditional grant finance.

9. At the operational level, control of employment and payroll appears to operate reasonably well as does the payment function for non-salary expenditure. Also, recent gains in transparency and monitoring of procurement augur well for improvements in value for money of expenditure, particularly if the medium-term planning of municipal investment can be improved. Internal audit in Fier is useful and effective, and external audit by HSC is evolving towards a greater focus on the performance of systems rather than simply inspecting compliance.

Integrity and consistency of financial data

10. Considerable difficulty has been encountered in this assessment as a result of inconsistencies between data provided by municipalities and data extracted from the Treasury system. Clearer instructions are needed covering what is to be included in municipal budgets, how they should be presented, and how budget execution should be reported. The unpredictability of Regional Development Fund (RDF) funding and the differences in the way it is reported by different municipalities, are the most glaring example of this. Rationalisation of budget preparation, reporting and accounting requirements would facilitate the development of better IT systems while improving the integrity of the data they contain through greater discipline in the way data is managed.

11. Fier as a relatively large municipality has the administrative capacity needed to discharge the functions for which the municipality is responsible, although the limitations on its resources mean that it cannot readily adapt to new challenges. The problems it faces are common to all municipalities in Albania, which is at a cross-roads for the development of municipal government. The need for more effective revenue raising through property taxes based on realistic valuations is acknowledged, while permanent arrangements have not yet been established to allocate to municipalities the resources they need in order to discharge the responsibilities recently transferred to them. There are no arrangements in place to allocate investment resources to each municipality in a way which enables them to plan their investments within a medium-term fiscal framework. The absence of common standards for the public presentation of fiscal information by municipalities is a further problem which needs to be addressed. 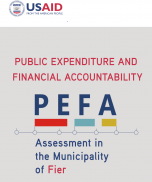